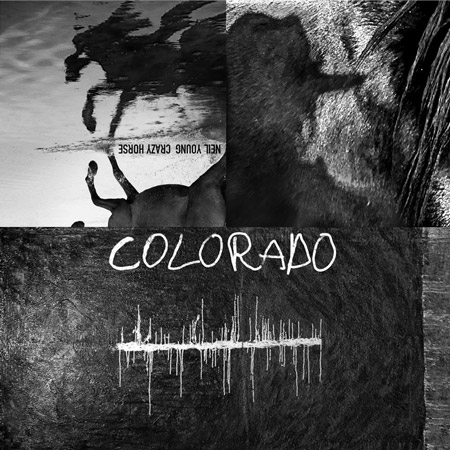 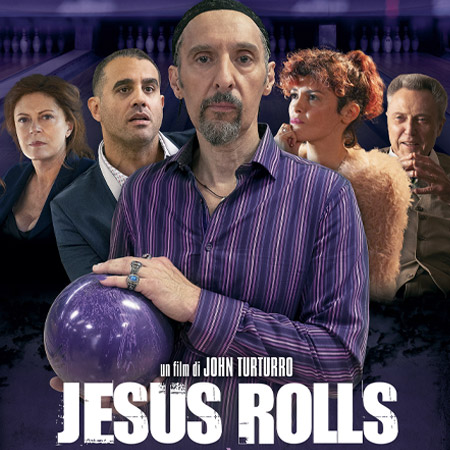 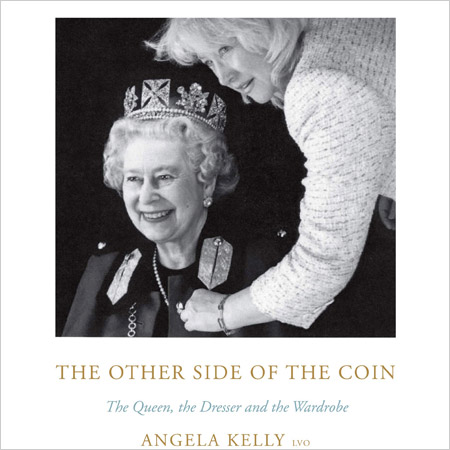 The Other Side of the Coin: The Queen, the Dresser and the Wardrobe book by Angela Kelly 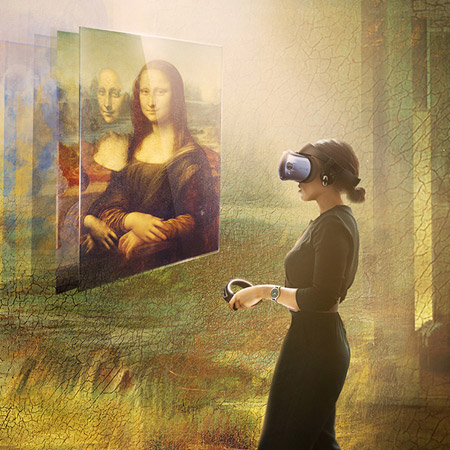 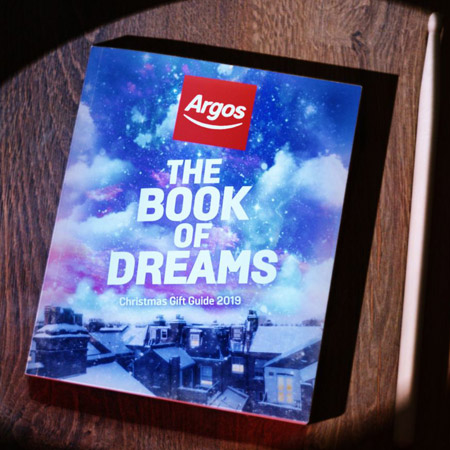 The Book of Dreams commercial by Argos 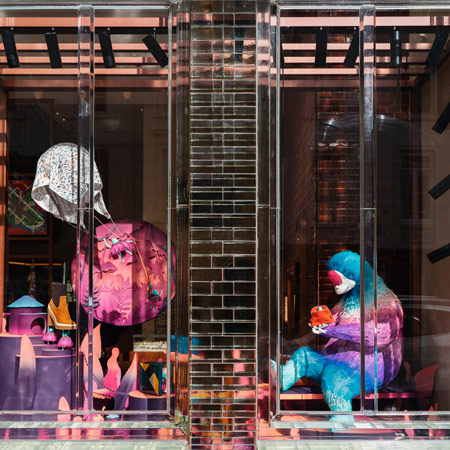 The Dream Hunter installation by Agnes & Anthony for Hermès – Amsterdam
The Dream Hunter art installation crafted from paper and recycled cardboard was designed for the new Hermès Crystal house store in Amsterdam by Brussels-based duo Agnes & Anthony. The window display takes inspiration from ancient Japanese folklore about a spirit called Baku. “It is said that if you have a nightmare you can call Baku three times and he will come to eat your nightmares,” explain the artists. “In our installation, we follow a friendly-looking, furry monster through the night, hunting for dreams and nightmares in a sleeping city before returning to his magical home deep in the jungle.” Consequently Baku, the handmade giant furry monster, became the protagonist of the luxury fashion brand’s window display. 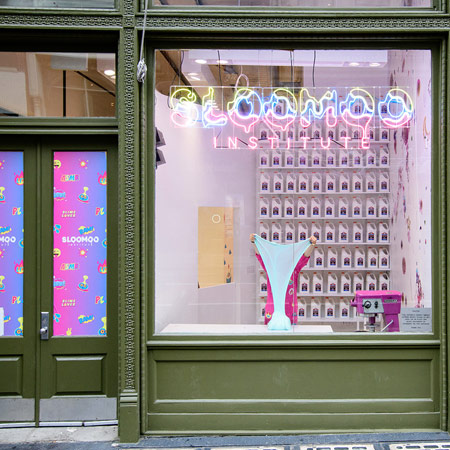 Sloomo Institute – New York
Open only for 6 months, this 8,000 squared-foot space, located in Soho, is totally dedicated to Slime, the “material” created for the amusement of children, which then became a global and ageless success. Born from the idea of one of the founders, who managed to get out of a situation of psychological crisis thanks to the manipulation of the Slime, the Sloomoo Institute is a real sensory and experiencial playground for this product. In addition to discovering its history, visitors can manipulate many variations, create a personalized one in the “kitchen”, attend lectures by expert Slimeologists, walk barefoot in the Slime Lake and even, by paying an extra fee, pass under the Sloomoo Falls. 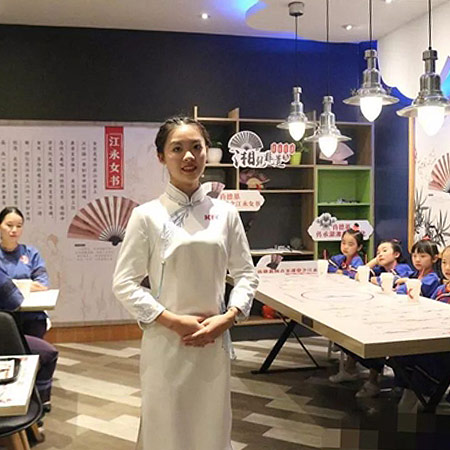 Nü shu at Kentuky Fried Chicken – Yongzhou – China
The American fast food chain Kentuky Fried Chicken opened in China on October 22, 2019 a unique “themed” sales point, which refers to a local cultural specificity that transcends the food sector. The new restaurant opened in Yongzhou, in the central Chinese province of Hunandi, is, in fact, dedicated to Nü shu writing, the only genre language still widespread in the world. The purpose of the retailer is to preserve this ancient and very rare form of Chinese syllabic writing, used in some areas of the country exclusively by women of the Yao people, a matriarchal type society, starting from the seventeenth century. The shop is decorated with ancient Nü shu characters, which literally means feminine writing, through the presence of calligraphic reproductions of poems and a series of literary works written in this form. The fast food chain also invited connoisseurs of this fascinating and mysterious art of writing to offer calligraphy lessons in the store and tell their habits to Yongzhou students. 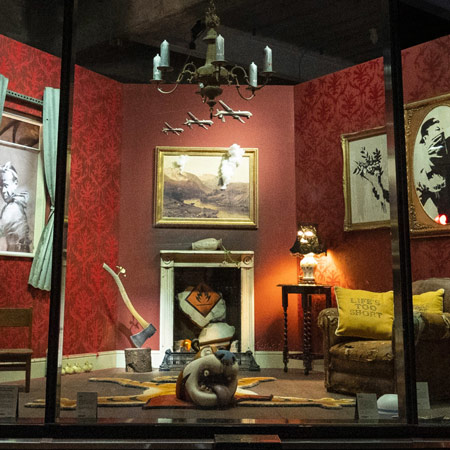 Gross Domestic Product installation by Banksy – Croydon – United Kingdom
Created by Banksy and appearing overnight, Gross Domestic Product is the latest installation to critique global society’s major issues of forced human migration, animal exploitation, and the surveillance state. The temporary installation, which was on view for two weeks in the Croydon, incorporates multiple window displays for a shop that is not in fact open to the passersby. However, some of the items on display are available for purchase in GDP’s associated online store including the welcome mats, which Banksy hired refugees in Greek detainment camps to stitch; all proceeds go back to the refugees. Revenue from sales of the doll sets will also support the purchase of a replacement boat for activist Pia Klemp, whose boat was confiscated by the Italian government. The product line is rounded out with such oddities as disco balls made from riot gear helmets, handbags made of bricks, and signed £10 spray paint cans. In a statement about the project, Banksy explains that the impetus behind Gross Domestic Product is a legal battle between the artist and a greeting card company that is contesting the trademark Banksy holds to his art. Lawyer Mark Stephens, who is advising the artist, explains, “Banksy is in a difficult position because he doesn’t produce his own range of shoddy merchandise and the law is quite clear if the trademark holder is not using the mark then it can be transferred to someone who will.” 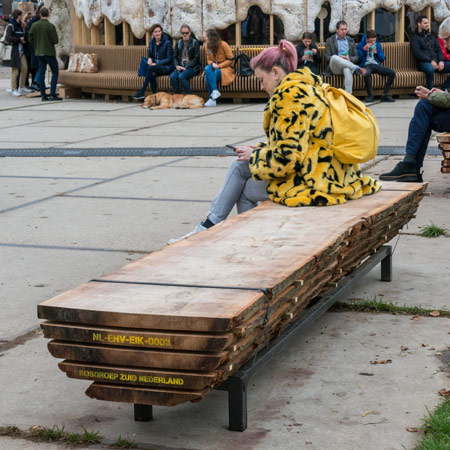 StormWood project by Atelier NL – Eindhoven – The Netherlands
Following a violent storm last June across Eindhoven, nearly 1.000 trees were wrecked and felled. In occasion of the Dutch Design Week, Atelier NL creates benches from those storm-felled trees: a project named StormWood. They cut the tree trunks in half lengthways, then sliced these again to make long planks. The resulting timber lengths were stacked, with wooden pegs creating a small space between them to allow the wood to dry out. The end of each bench is printed with a unique number that identifies where that specific tree used to stand in the city. Each tree is coded and registered on the site www.wildhout.com so you can trace its origin, see who turned it into a sustainable product, and who took it home. Meanwhile, if you want to contribute directly, visit the WildHout project at Atelier NL’s location, adopt a sapling and replace a tree fell during the storm.

Supervynil store by Standard- Los Angeles
Supervinyl is a newly-opened record store, located in Hollywood, that not only stocks a curated collection of classic and rare albums, but also a selection of turntables, speakers and audio equipment as well. The boutique has been designed by the locally based architecture and design studio Standard. Rather than appearing like a throwback to music’s golden era, Superviny LA’s whopping 1,750 sq ft space has been spliced with black stained oak display cases, panels with integrated lighting, eye-catching louvered ceiling panels and a natural concrete floor for a completely contemporary feel. Once past the black brick and glass storefront, visitors are met by a grid of records, organised in layered tiers that extend upwards toward eye level.
The modular space also boasts several freestanding pedestals and display cases which can then be moved or reconfigured to form seating at the front of the space to accommodate live performances and band appearances. 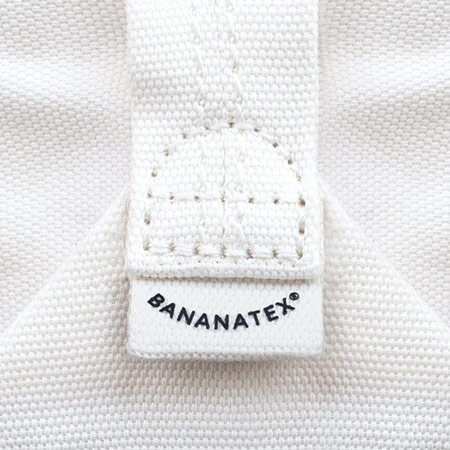 Bananatex® and Qwstion Backpack
Swiss backpack brand Qwstion wins the prestigious Design Prize Switzerland 2019 in the texile category for Bananatex®: the world’s first technical fabric made purely from banana plants which are organically cultivated in the Philippine highlands. The Company invested three years of research, exploring ways to make bags from renewable resources, and affirms: “Bananatex® is a sleek, waterproof fabric made from 100% natural banana fibres, at once super strong and durable, yet light and flexible. The natural beeswax coating gives a smooth, water-resistant finish and a supple hand feel. Given our ultimate aim to offer a viable alternative to synthetic fabrics that currently dominate the bag industry, we’ve developed Bananatex® as an open source project (…)“. Qwstion is about developing sustainable and flexible solutions for mobility: all their bags come with multiple carrying options to adapt to daily needs and pursuits, be that business, leisure or travel. 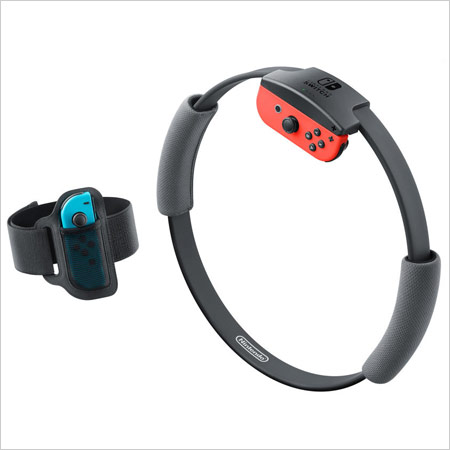 Ring Fit Adventure by Nintendo
The Japanese company Nintendo has launched Ring Fit Adventure, a digital adventure halfway between video game and exercise, and physical activity as a key element of this product. In Ring Fit Adventure, players explore a vast fantasy world full of enemies to be dealt with by squat shots, sit-ups and much more. The Ring-Con and the leg band, the two accessories included in the game’s packaging, detect and measure the movements of the players in the real world and turn them into actions in the game world. For example, running on the spot it is possible to advance the character, while compressing the Ring-Con you launch attacks. In this way, by playing daily, users can train various parts of the body. Thanks also to mini-games and additional training programs, Ring Fit Adventure is a fun experience and suitable for everyone. 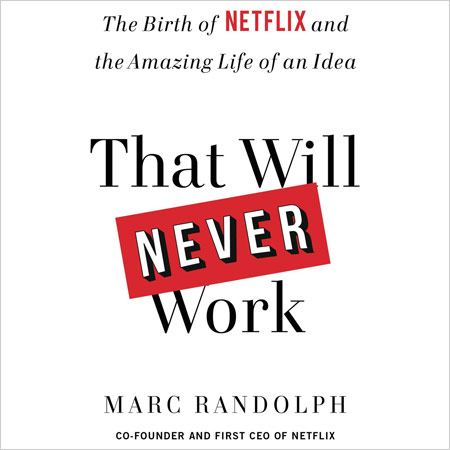 That Will Never Work book by Marc Randolph
That Will Never Work is a book for those who are curious about how a great idea can become a world-changing company. The big company is Netflix and to tell about its birth and evolution is one of the two founders who, in the first person, explains how success did not come immediately thanks to a flash of insight, nor in a foregone way. On the contrary, it all starts with a long series of potential business ventures, dreamed-up every morning by Marc Randolph and his partner Reed Hastings as they carpool to work. The book tells of all the times when the idea didn’t work and all the people who helped him make it work. A true education for the startupper job. 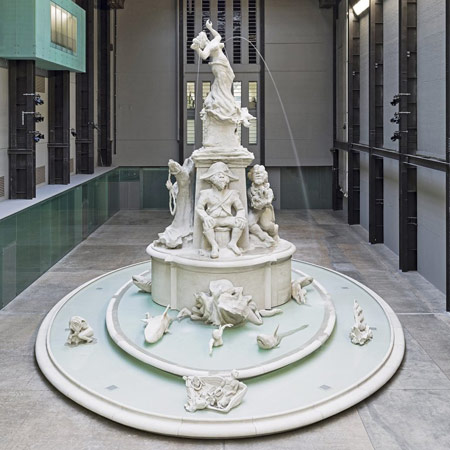 Fons Americanus by Kara Walker – Tate Modern – London
The American artist Kara Walker brings a bold, poetic energy to the clunky art-garage of the Turbine Hall of Tate Modern for the annual Hyundai-sponsored installation. She presents just two pieces: a towering, faux-Victorian fountain and a smaller sculpture shaped like an oyster. Fons Americanus is the name of the 13-meter-high fountain. With a cast of characters and iconography reflecting the intertwined histories of Africa, Europe and America, Fons Americanus presents the brutality of slavery in a subversively joyful setting. Walker is known for her ambitious work across mediums interrogating race, sexuality, slavery and identity. The artist was inspired in part by London’s Victoria Memorial, a towering, majestic monument to the Queen who commandeered the British Empire. “I just got this jazzy feeling,” she says. “I’m interested in ways allegorical figures are misrepresentative of the thing they’re meant to symbolize.”