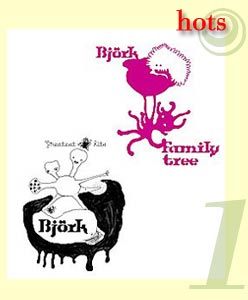 Björk
Björk has embarked upon an ambitious, long project for the upcoming months. What she plans to do is come out with a series of CDs and DVDs, headed off by a collection of greatest hits, featuring songs selected by her fans on her official Internet site. Along with this compilation of favorite hits, she has also come out with her own personal collection of “Best Of” songs, composed of singles, B-sides and less-known tunes, a veritable family tree, a sort of autobiography of her musical career. They are also about to release Volumen +, the updated version of the DVD with all the videos starring the diminutive queen of techno pop. Another DVD scheduled to come out soon is entitled, Live At The Royal Opera House, recorded during the Vespertine tour which saw the Icelandic artist performing in opera houses and concert halls. In celebration of the release of the greatest hits collection, for a limited period only, all of Björk’s previous albums will be sold at special reduced prices. Plus, from November to February, at a rate of one a month, they will be re-issuing the “old” Debut, Post, Homogenic and Vespertine albums with the same songs as on the original versions and in the same order, but recorded during the course of the many concerts that Björk has given all over the world in the last eight years. 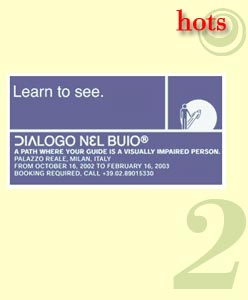 Dialogo nel buio (Dialogue in the dark)
From 16 October 2002 until 16 February 2003, MilanÕs Palazzo Reale is hosting Dialogo nel buio, an “exhibit that doesn’t exhibit “, but rather teaches us to see. The goal of Dialogo nel buio is to raise awareness about handicaps, in particular, the condition of blindness, by means of a unique experience: an itinerary that the public pursues in total darkness, experiencing what it means to be without the sense of sight. The journey, which lasts about an hour, passes through several rooms that reproduce a variety of environments. Visitors are accompanied by a very special guide who helps them discover another way of seeing based on the use of alternative senses. The guide, the invisible but reassuring Virgil, is none other than a genuinely unsighted person. Having wound through specially set-up areas that reproduce natural outdoor settings and urban environments, the final destination of this pilgrimage is a bar where, still in total darkness, the visitors are encouraged to simply relax and discuss their impressions of what they have been experiencing. The tables have been turned and the rolls of sighted and unsighted have been switched, barriers have been lowered. The dialogue in the dark, unimpeded by the visual barriers of appearance, judgement and discrimination, is set free, rising to unexpected heights, an event that will surely remain impressed upon every visitor’s memory. 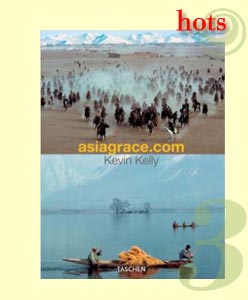 Asia Grace by Kevin Kelly
Asia Grace is the latest, not exclusively, photographic book by Kevin Kelly (the former editor of Wired) and published in three languages by Editore Taschen The fruit of numerous trips through Asia over the last thirty years, the book constitutes a sort of open-ended experiential journey, a personal invitation by the author to enter and “fall” into the book. The interactive Asia Grace Internet site is an integral part of the Asia Grace experience. The entire book is presented on the site where its hundreds of photographs are accompanied by the author’s stories and comments. Each image, however, is also an invitation to share oneÕs own thoughts and personal experience in order to get in step and join in a new journey composed of multiple voices and points of view. 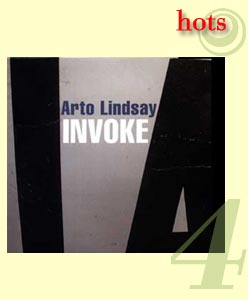 Arto Lindsay “Invoke”
Brazilian musician, Arto Lindsay, who received the Tenco Lifetime Career Award in October of 2002, is continuing to evolve as an artist. His latest CD, Invoke (September 2002), manages a harmonious fusion of electronic experimentation, the sublime sweetness of song and the profound spirituality of his native land with the latest evolution of an ongoing quest to achieve new sensibilities, cultures and planetary resonances: an “invocation” on a truly grand and comprehensive scale. 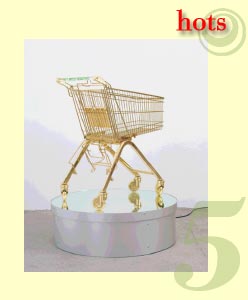 Shopping Exhibit Frankfurt
On Saturday 28 September 2002 they opened the Shopping exhibit at the Schirn Kunsthalle in Frankfurt. This exhibit analyzes the phenomenon of shopping as a cultural phenomenon, viewing it in the context of the last 100 years. The show features over 70 artists active in the visual arts, architecture and the cinema, including the likes of Marcel Duchamp, Claes Oldenburg, Gerhard Richter, Andy Warhol, Rem Koolhaas and Jeff Koons. 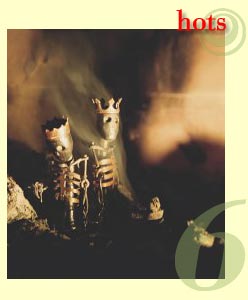 Riot Acts – Pearl Jam
The new Riot Acts album that was released 12 November only adds to the mythological aura that has grown up around the band known as Pearl Jam. In addition to the momentum provided by the group’s musical merits, this album is being also being hyped by the band’s own website, featuring a chat line over which it’s possible to send impassioned love messages to the musicians (or insults, if one is so inclined). 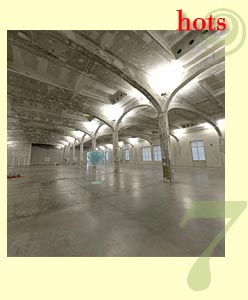 Tom Friedman, The Prada Foundation Milan
The Fondazione Prada has mounted an exhibit devoted to Tom Friedman (Saint Louis, Missouri, 1965), the most extensive and complete anthology ever presented of this artist in Italy. Tom Friedman belongs to that generation of artists who in the early Nineties once again began focusing its attention on the world of things, reacting to the physical and tactile annihilation carried out by Pop art in the name of the almighty image. He refocuses artistic energy and attention on the fragile and ephemeral world of everyday objects, purging them of that hyperbolic, self-celebrating aspect typical of the Sixties. The materials he uses are things like spaghetti, leather, chewing gum, scraps of paper, detergent, dust, toilet paper, little bars of soap and colored art paper, materials that in his hands are transformed into entirely new objects and imbued with an amazing degree of formal perfection. The exhibit includes some of the works done by the artist in the late Eighties and early Nineties, such as Untitled (1989), a trapezoidal surface on walls made from toothpaste, and Untitled (1990), composed of two bundles of chopsticks from Shanghai, one group haphazardly scattered, the other carefully arranged in a manner that duplicates the first group. 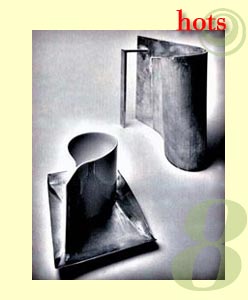 Alessi’s operation at the Venice Architecture Biennale
During the Venice Architecture Biennale, Alessi proposed the City of Towers project: a new landscape of objects designed by famous architects, inspired by the Tea and Coffee Piazza operation of the Eighties. Domestic objects and expressive language are tackled in terms of scale, ranging from the larger dimension of architecture to the much smaller one of objects. 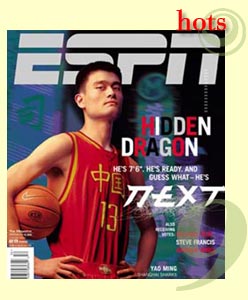 Yao Ming Chinese Basketball player
The Time‘s magazine dedicated an article on him titled: “The New Mr.Big”. Last year Yao Ming scored 32,4 points per game in the Chinese Basketball Association. The 22-year-old Chinese giant, at 2,26m high and the only child of a 1,91m mother and a 2,01m father both former national team players, spend the past ten years training in a basketball academy in Shanghai. Now NBA is eager to have him and he will have the chance to play with the worldÕs elite players for the first time. 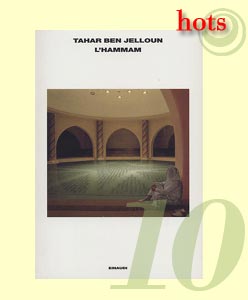 The Hammam by Tahar Ben Jelloun
In his latest book, The Hammam, writer Tahar Ben Jelloun tells the story of an apparently successful and happy pianist who, however, possesses an exceptionally acute sense of smell that allows him no peace, dwelling in a body that, according to him, gives off an unendurable stench. Unaided by the marvels of science and good intentions of his loved ones, he harks back to his childhood and forgotten customs, to timeless characters from his past. This course of reflection brings him back to a hammam he frequented as a lad where he rekindles a relationship with one of the masseurs, a philosopher. An encounter between men, different cultures and lifestyles, with books used as talismans: a journey that will finally lead him to an encounter with himself.