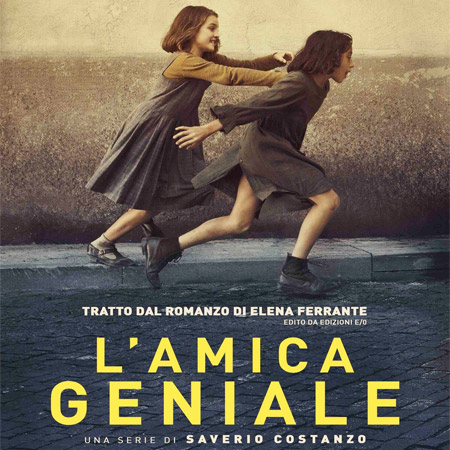 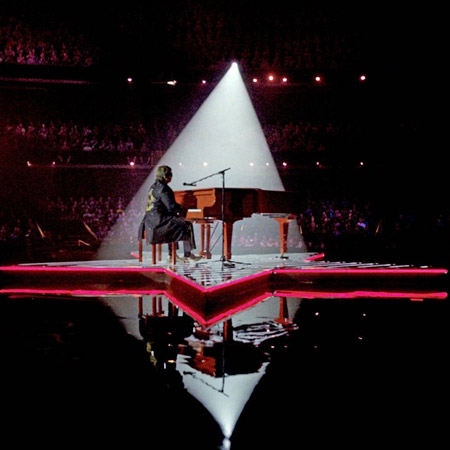 Christmas commercial 2018 “The Boy & The Piano” by John Lewis & Partners 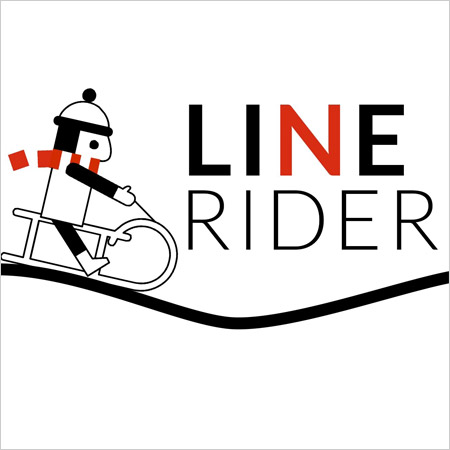 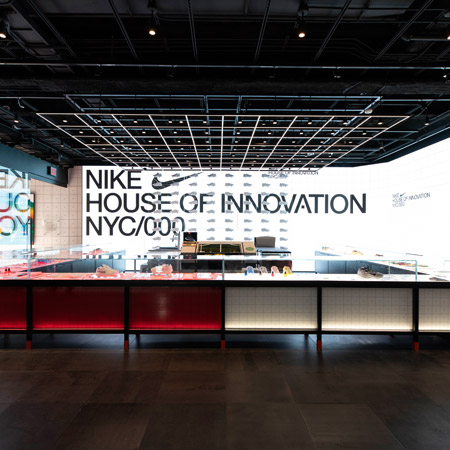 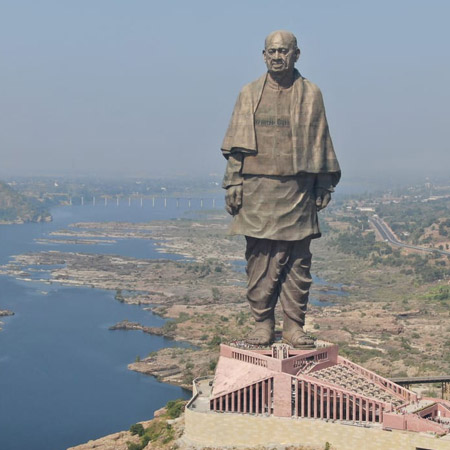 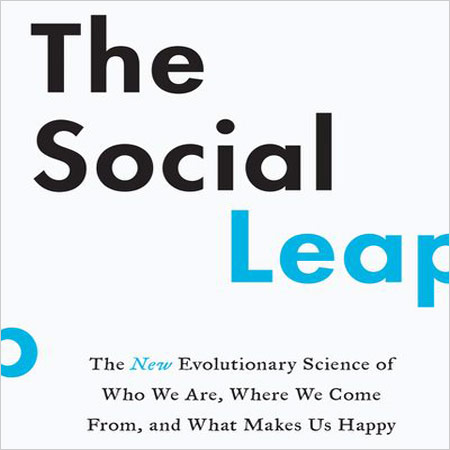 The Social Leap book by William von Hippel
In The Social Leap the author applies evolutionary science to provide a new perspective on human psychology, revealing how major challenges from our past have shaped some of the most fundamental aspects of our being. The most fundamental aspects of our lives – from leadership and innovation to aggression and happiness – were permanently altered by the “social leap” our ancestors, for example made from the rainforest to the savannah. Their struggle to survive on the open grasslands required a shift from individualism to a new form of collectivism, which forever altered the way our mind works. Blending anthropology, biology, history, and psychology with evolutionary science, William von Hippel (Psychology/Univ. of Queensland) lays out this revolutionary hypothesis, tracing human development through three critical evolutionary inflection points to explain how events in our distant past shape our lives today 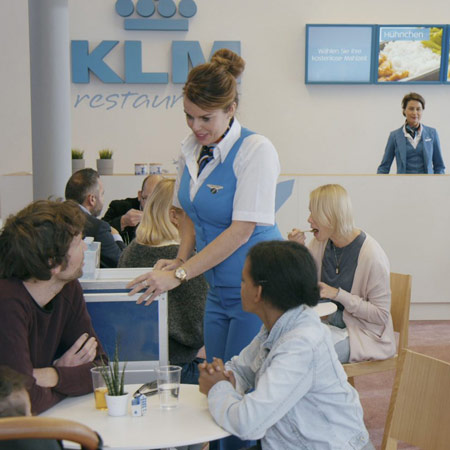 We Are An Airline campaign by KLM – Germany
KLM (the Dutch airline, around since the early 1900s) turns Germans’ misconceptions about its brand into experiential awareness activation. Germany is KLM’s most important market, however, almost half of the country’s residents (46%) don’t recognise the brand. A series of activations in response to consumer insights, drives engagement with interactive and informative community experience turning into what Germans believed it was: a bank, a restaurant and a radio station. For few days, the airline opened a restaurant serving people KLM’s in-flight meals for free; instead of money, the airline’s ATM gave out free tickets to KLM destinations and played a video explaining the benefits of flying with KLM; they took over a German national radio station with original programming, including bespoke KLM tracks as well as news reports, ad breaks and quizzes. Beyond the experiential pop-ups, the We Are An Airline campaign was promoted with traditional radio ads, digital executions and social media post. The campaign song was also released on Spotify. 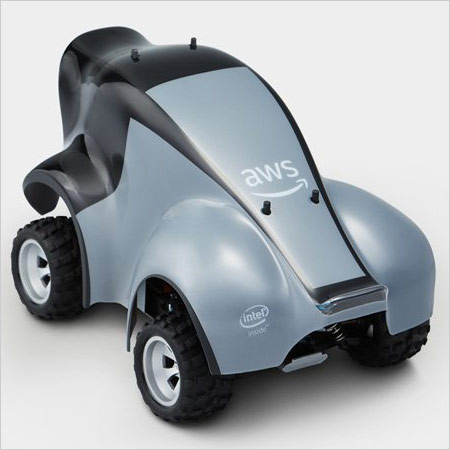 DeepRacer by Amazon Web Services
Amazon Web Services is launching a self-driving toy car that hopes to encourage a community of developers interested in machine learning. The AWS DeepRacer, a radio-controlled, four-wheel drive, is trained using reinforcement learning, a form of AI which means it will learn to drive better through trial and error. It’s about 1/18th the size of an actual car and will cost $400, although currently being offered at a preorder price of $249. The objective is for developers to program the AWS DeepRacer to drive itself using Amazon SageMaker, Amazon’s artificial intelligence service. Developers can test-drive the car using a 3D simulator giving them the chance to virtually drive their car on a collection of tracks to determine whether their algorithm is good enough. When they are happy they can plug the algorithm into the car and race it for real. AWS is launching the DeepRacer league, an autonomous racing league that will hold matches at Amazon cloud events throughout next year. There developers can compete against each other by racing cars to see whose algorithms lead to the fastest race times. Winners and top scorers will advance to the AWS DeepRacer 2019 championship cup at re:invent 2019. 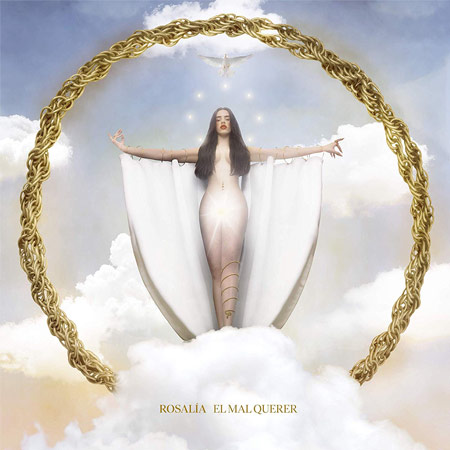 El Mal Querer album by Rosalìa
The second album, El Mal Querer, by Rosalía, the singer-songwriter considered by the press as the breakout artist of 2018, is out. Her single, Malamente, has over 31 million streams on Spotify and 22 million views on YouTube. Much loved in Spain, with her performance at the last Sónar has captured the attention and admiration of audiences and critics reaching international notoriety. “El Mal Querer represents the way I mean flamenco today,” said Rosalía. Her innovative mix of flamenco, electronics and urban has also won over artists such as Pharrell Williams, Khalid, J Balvin, Juanes, Romeo Santos and even Pedro Almodóvar who made the 24-year-old singer-songwriter’s debut in her new film “Dolor y Gloria” alongside Penélope Cruz. Rosalía has received five Latin Grammy 2018 nominations (Record of the Year, Song Of The Year, Best Urban Fusion/Performance, Best Alternative Song and Best Short Form Music Video), making her the most nominated female artist of this year’s edition. 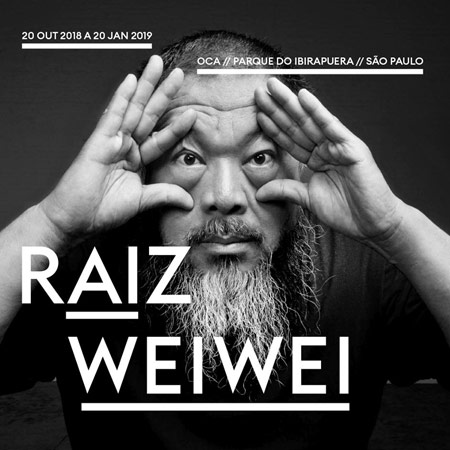 Ai Weiwei: RAIZ exhibit – Sao Paulo
Ai Weiwei’s first ever exhibition in Sao Paulo, is entitled Ai Weiwei: RAIZ, and is the largest exhibition ever held in the world by the Chinese artist and dissident covering a total area of 8,000 square meters. The colossal retrospective, developed and curated by Marcello Dantas, held at the OCA in Ibirapuera Park, showcases the artist’s life story through his most iconic works, along with the new works that arose from a deep immersion into Brazil and its traditions. The numbers are impressive. Seventy works of art weighing 500 tons, distributed in one of the largest exhibition spaces in the world. One hundred people working for 21 days in the assembly of the exhibition, which was created and produced over seven years, at a cost of R$ 10 million. 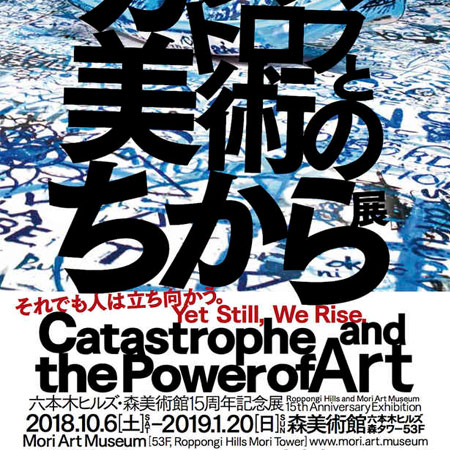 Catastrophe and the Power of Art exhibition – Mori Art Museum – Tokyo
Recent decades have seen a stream of catastrophes around the world – from 9.11 in 2001 to the global financial crisis of 2008, the Great East Japan Earthquake in 2011, and the list goes on – and many artists have produced works dealing with these tragic events, in an endeavor to inform the wider world of them, and ensure their stories are passed down to future generations. A major exhibition at the Mori Art Museum in Tokyo is dedicated to the concept of catastrophe and its intertwining with art. The exhibition is titled Catastrophe and the Power of Art and brings together works of art from a variety of authors from around the globe, as if to remind us that a tragedy or war often happens in some corner of the earth. Each artist uses and filters the concept of catastrophe according to his political and artistic sensitivity, denouncing guilty, trying to get up or shedding light on facts, but also facilitating the process of re-elaborating grieving and providing coordinates to survive the tragedy. 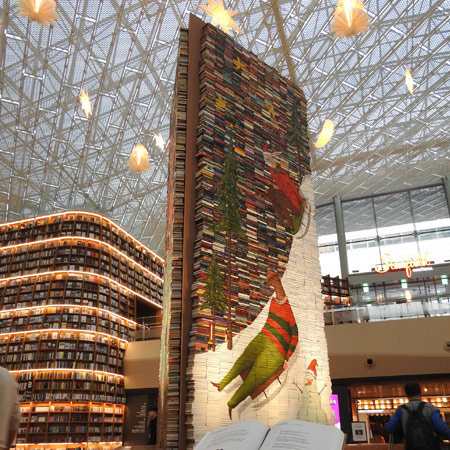 Christmas book tree installation by Mike Silkey – Coex Starfield Library – Seoul
American artist Mike Stilkey created a tower of books for the Coex Starfield Library in Seoul. It’s a Christmas book tree. The tower is a three-sided structure, reaching as high as 9 meters. He used almost 14.000 books, on which he painted whimsical Christmas-themed illustrations. There’s one with Santa Claus and a humanoid reindeer sledding down a hill. The whole project took him about two months to complete. Silkey is known for drawing on big stacks of vintage books as a way of giving discarded books a second chance, and has had his work displayed all over the world. Starfield Library is located in Coex Mall, the world’s largest underground shopping mall. The 2.800 square meter heaven for book lovers consists of three huge 13m-tall bookshelves filled with over 50.000 books and magazines. 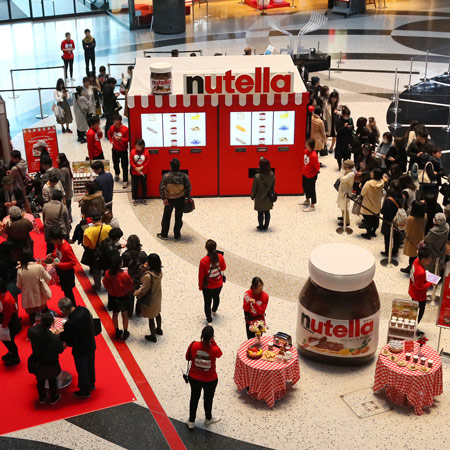 Nutella Morning Slot by Ferrero – Osaka
Only on the 23rd, 24th, and 25th of November, at the Grand Front Osaka mall in Japan, Ferrero set up the Nutella Morning Slot. A huge slot machine that delivers randomized and creative breakfast items featuring Nutella, on different type of crusty breads and toppings. Coconut, bananas, blueberries and many more ingredients garnished the Nutella toasts offered by the Machine, in 20 different casual variations, from 10 AM to 8 PM. A fun and playful way to let people know and try the product. 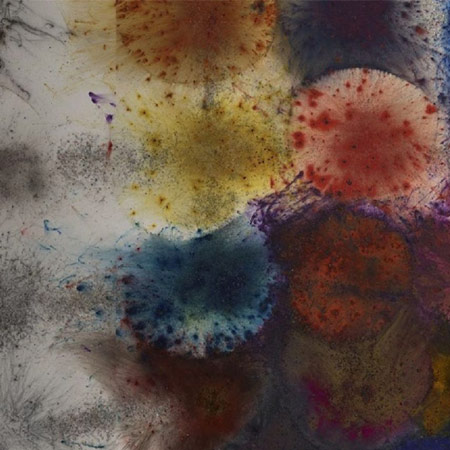 City of Flowers in the Sky fireworks by Cai Guo-Qiang – Florence
November 18th, as a tribute to the city of Florence and on the occasion of its exhibition Flora Commedia: Cai Guo-Qiang at the Uffizi inaugurated on November 20, the Chinese artist created the pyrotechnical work City of Flowers in the Sky that started with “Thunder”, and follows with six acts including “God of the West Wind and Goddess of the Land”, “The birth of Flora”, “Venus”, “Three Graces”, “Spiritual Garden” and “Red Lily” made by a diurnal fireworks detonated from the Piazzale Michelangelo in Florence. The 50,000 fireworks inspired by Botticelli’s Spring were made in collaboration with the two Italian fireworks company Martarello and Domenico Mazzone & Co, filling the sky with an extraordinary explosion of colors. In his projects the Chinese artist shows the contradictions and philosophical dilemmas of contemporary people, through the use of explosives, such as in the past also gunpowder. 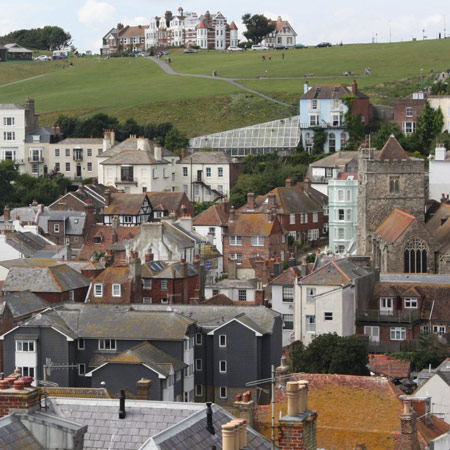 Ministry of Housing hunts for Head of Architecture – United Kingdom
The UK government is recruiting for a head of architecture to champion the importance of good design and raise the design standards of new housing schemes. The position within the Ministry of Housing, Communities & Local Government (MHCLG), which comes with a £61,083 salary, is for a qualified architect to advise on architectural policy and practice. According to the job specification, the candidate needs a strong political awareness and a proven track record of delivering quality housing schemes. The new role has been announced following the establishment of the government’s Building Better, Building Beautiful Commission, which also aims to improve the design of homes in the country. Along with advising on housing, the head of architecture will be expected to give design support for projects across the government.