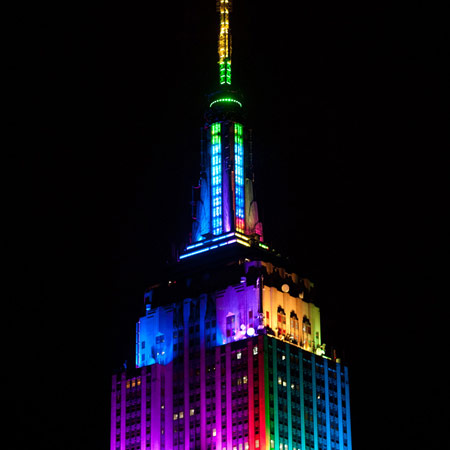 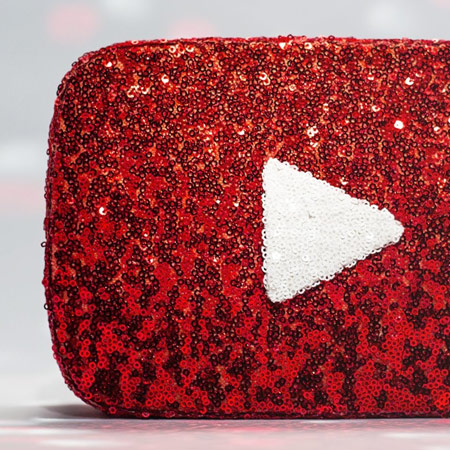 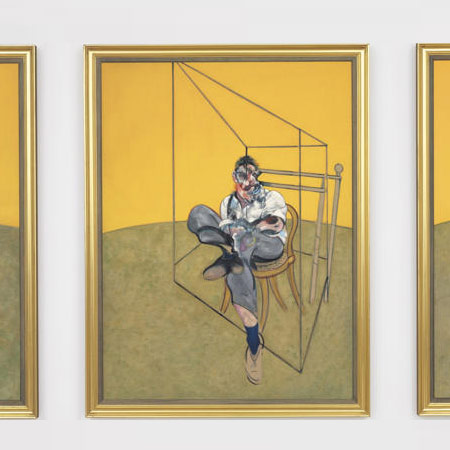 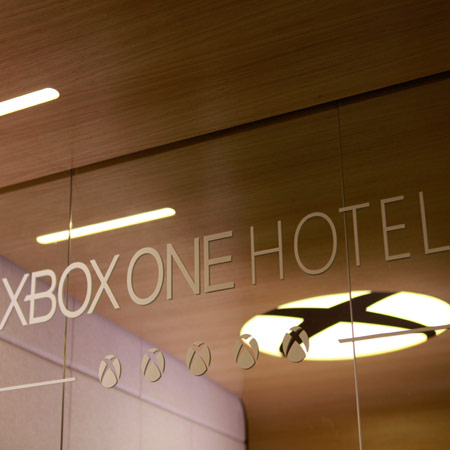 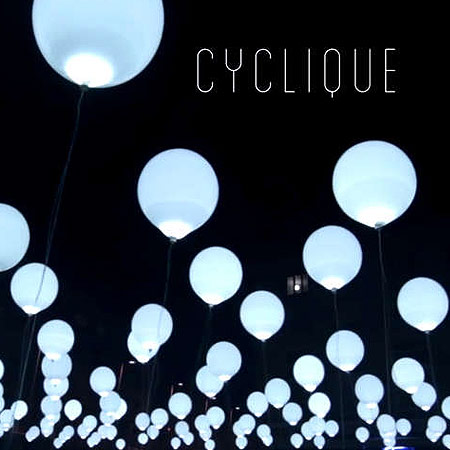 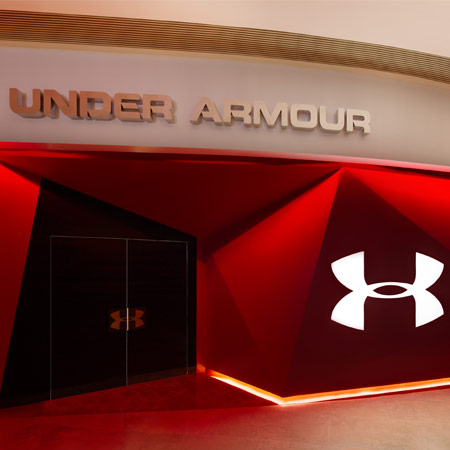 Under Armour Experience Store – Shanghai – China
Under Armour, Baltimore (USA) based athletic apparel company, has opened its first-ever “experience store” in Shanghai, China, combining elements of theatre and promotional venues with those of a retail store. The first-of-its-kind retail environment places storytelling at the forefront through a multi-dimensional short film that immerses visitors in the brand’s world of making athletes better through passion and innovation. After entering the space, visitors walk down a 30-foot long tunnel of light, designed to alter their retina in preparation for the Experience room. Inside, a 270-degree panoramic film surrounds the viewer. It is designed to tell the story of the Under Armour brand using a series of vignettes. After the film ends, consumers are directed to a section of the store with a limited selection of the brand’s footwear and apparel where purchases can be made. 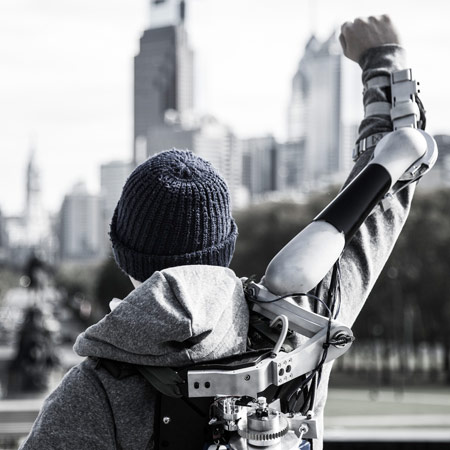 Titan Arm wins 2013 James Dyson Award – United Kingdom
Titan Arm, a battery powered upper-body robotic arm which instantly increases human strength, has won the 2013 James Dyson Award. Augmenting arm strength by forty pounds, Titan Arm helps rehabilitate people with back injuries, allowing them to rebuild muscle and relearn motor control. A team of mechanical engineering students from the University of Pennsylvania spent eight months creating it. Their 30000 Pounds prize will fund further development, testing and, ultimately, commercialisation. The prototype cost $2,000 to produce, a significant cost reduction compared to similar exoskeletons that are currently upwards of $100,000. The Titan Arm team hopes to eventually market the suit commercially for less than $10,000. Nick Parrotta of Titan Arm said, “We wanted Titan Arm to be affordable, as exoskeletons are rarely covered by health insurance. This informed our design decisions and the materials we used. Most structural components are machined from inexpensive aluminium.” 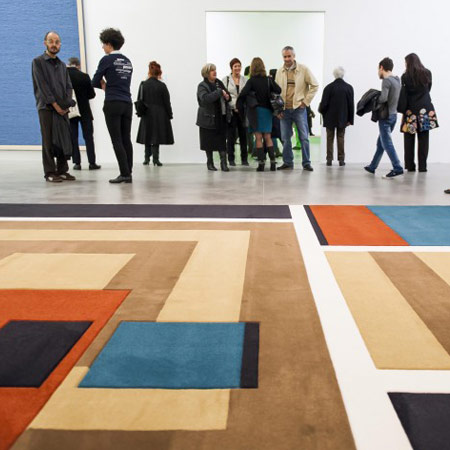 Soft Pictures exhibit – Fondazione Sandretto Re Rebaudengo – Turin
Soft Pictures is a group exhibition, at Fondazione Sandretto Re Rebaudengo in Turin, that explores the use of textile in contemporary art. The show addresses the multiplicity of meanings that the adoption of this medium entails in artistic practice. Today, artists are going back to textile and its multiple historical, political, social and symbolic meanings—a rich semantic texture, which unfolds through the exhibition. Function and decoration, design and art, tradition and modernity: Artists move between these poles, reflecting on the artefact as a cluster of different tensions and symbols.

The Chill Activated Can by Coca-Cola – United States
The Chill Activated Can, a new packaging design presented by the soft-drink giant Coca-Cola for cans that change based on the temperature, premiered at this year’s 2013 NACS Show in Atlanta. Every can is printed with a special thermochromic ink that reacts to temperature by changing color. When the coke can is chilled to 48-degrees Fahrenheit, three blue cubes would appear inside the glass, designed on the can.
“The packaging’s irresistible cold cues drive a visceral response to the Company’s flagship brand, providing a compelling invitation to consumers to enjoy the “ice-cold Coca-Cola” experience,” stated the brand in a press release. 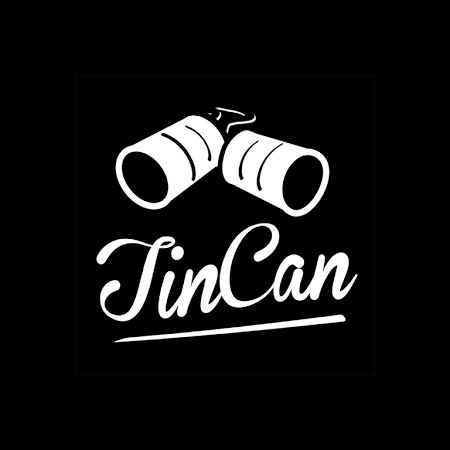 Tin Can app by Mark Katakowski – United States
Tin Can is a phone-to-phone messaging app that can work without an Internet connection or cell phone service. This app uses the transmission capabilities of wifi-enabled devices and creates a network able to deliver messages to other Tin Can enabled phones running Android. Every phone can send signals only seven meters at most. But freed from the constraints of a network, that short transmission radius could enable crowds to communicate regardless of disruptions that can happen during protests, concerts, sports events and so on. Users don’t have view every message: They can set up the app so to view just the messages from selected followers. 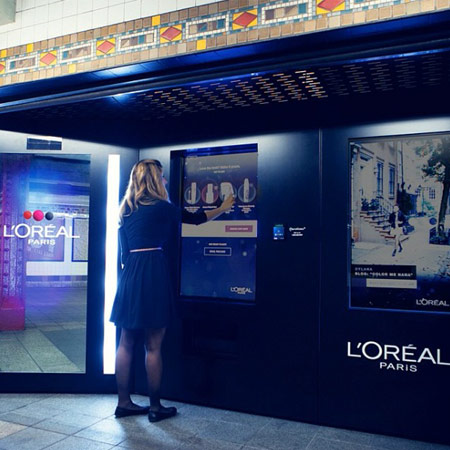 Intelligent Color Experience by L’Oréal – United States
L’Oréal’s “Intelligent Color Experience” is an interesting new experiment by the US branch of the French cosmetics giant. Through the end of December, those passing through the 42nd Street/Bryant Park subway station will come across an interactive vending machine system featuring a full-length mirror and a high-tech vending system full of beauty products. Step in front of the mirror, and digital animations featuring potential makeup combinations will pop up next to your image and offer products — which you can buy on the spot — that either “Match” or “Clash” with whatever you’re wearing. The machines feature various eye, lip, and nail products from L’Oréal’s Colour Riche collection as well as the brand’s newly launched Voluminous Butterfly mascara. 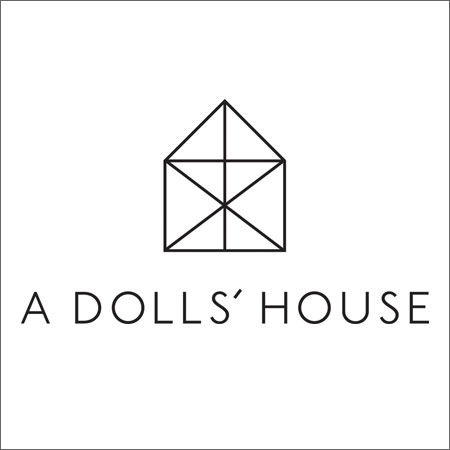 A Dolls’ House Project – United Kingdom
On November 11th, twenty of the world’s best contemporary architects and designers presented their version of a dolls’ house in an exhibition and auction at Bonhams, with proceeds going to KIDS, a British charity that supports disabled children. The project was curated by Cathedral Group Plc, and was inspired by the dolls’ house that Edwin Lutyens designed for The British Empire Exhibition at Wembley in 1922. There were no creative barriers to the project except that the dollhouse could be no larger than 750 x 750mm and it had to include one unique feature that would help a disabled child. On display at the Domus showroom since the London Design Festival in September, online bidding was possible until the auction date. In total close to £90,000 was raised for the charity. 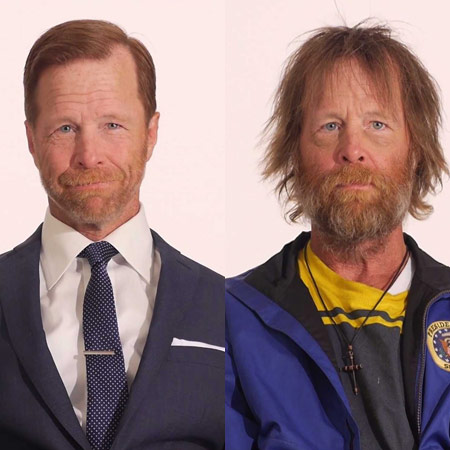 Timelapse Homeless Veteran Man’s Transformation – United States
Rob Bliss Creative have presented its most recent initiative Homeless Veteran Timelapse Transformation, a video where Jim Wolf, US Army veteran who had struggled for decades with poverty and alcoholism, agreed to be part of what was defined as “the first corner turned” in his transformation process. A volunteer team of stylists, photographers and producers changed Jim’s appearance to help change the way people look at the homeless. Dégagé Ministries who offers help and hope to homeless individuals, designed a long-term responsive programme, and brought together Jim and the team of creative people. According to Bliss, well known for his previous installations creating experiential marketing, the makeover video is the starting point to help Jim walk down his path, “everyone is worthy of being treated with dignity and respect”. 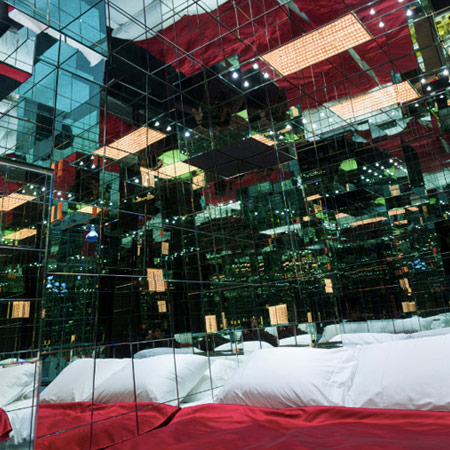 La Kiss Room installation by Mathias Kiss – Paris
French-Hungarian artist Mathias Kiss has created La Kiss Room – an art installation/one-room hotel with 1,000 mirrors that’s open for 1,000 nights starting in November 2013, and the room can only be booked one night a time for a price of around €750 to €1000. Located in a converted storeroom of Paris bar La Perle in the 3rd arrondissement, the petite 10-m² room is covered with floor-to-ceiling squares of mirror. Kiss designed the space-distorting installation to express both infinity and the idea of our intimate selves. To an introspective end, the room has no windows, and is acoustically isolated from the rest of the building. The only thing guests do hear is a constantly evolving song by Nicolas Godin, from the French band Air. 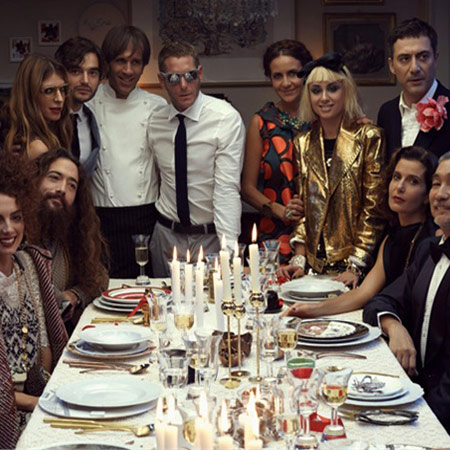 Dinner Party in Milan by Yoox
Yoox has launched on the occasion of Christmas, Dinner Party in Milan by Yoox, a dinner party presented through an interactive video. At center stage, five couples that represent the themes of gifts: simply chic, artsy, party, festive spirits and globetrotter. Guests are decorated look of the most important brands in the fashion world and clicking on the characters you have access to a range of products inspired by their outfits, of course, be purchased in real time. The main characters, actors and prominent personalities in culture and in the show, in the video come together for an exclusive dinner created by chef Davide Oldani: on the table there Yoox all over the world, from fashion to design through to art. Five are also the recipes and chef-designed menus for the holidays. Users, all are invited to join the party posting Instagram photos of their table prepared for the holidays. The best will be published in The New Yooxer, the area of editorial yoox.com.