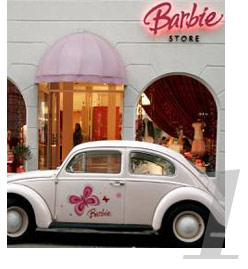 Barbie Store Buenos Aires
The idea came to Tito Loizeau three years ago: Build a Barbie-themed store. Loizeau’s marketing company had set up a small “House of Barbie” inside the mall. He was astounded by the reaction. “It would be a pink shirt you could buy anywhere in the mall, but they’d want the shirt because it was associated with Barbie.” So he set out to open the world’s first Barbie “fashion-tainment” store in Recoleta Buenos Aires, where girls can get glittery hairdos and make up at the Barbie beauty parlor or try on gowns and play with dolls in the Barbie playroom, all while their parents nibble pink-frosted desserts in the Barbie cafe. 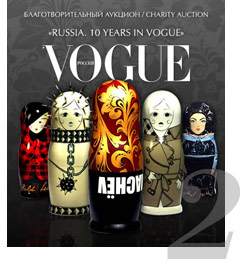 Matrioshkas for Vogue Russia
Fashion’s biggest names came together to help celebrate 10 years of Russian Vogue. In commemoration of the 10 year celebration, Donatella Versace, Giorgio Armani, Antonio Marras, Ralph Lauren, as well as 27 other designers were asked to design a dress for a matrioshka (the traditional Russian doll). Each designers’ hand drawn sketches were brought to life by Russian craftsmen, who hand painted the all 31 – 50 cm dolls. “Every matrioshka is unique and a piece of art in itself, Installation, sculpture, piece of art – you can call it however you wish” tells Vogue Russia’s Editor-In-Chief Aliona Doletskaya. The dolls have been auctioned off for charity. The money will be directed to the Northern Crown welfare fund.

Iraq War Ends – New York Times
1,2 million copies of a fake issue of The New York Times were handed out in different cities across the US, with a headline that says: “Iraq War Ends”. The newspaper includes a front page story saying that “Ex-Secretary of State Condoleezza Rice reassured soldiers that the Bush administration had known well before the invasion that Saddam Hussein lacked weapons of mass destruction.” The 14-page paper was dated 4 July 2009, and featured variety of optimistic news about politics, health care, energy, and much more. Not only that, the spoof paper got a website that looks exactly like New York Times original website. This campaign was managed by The Yes Men, a longtime liberal prank group. 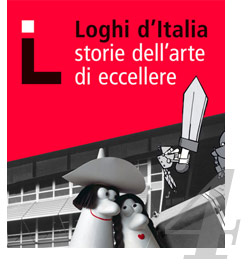 Logos of Italy. Arts and case histories of excellence – Rome
From the “Martini” adv by Andy Warol and through the boxes of “Baci Perugina”, until the Depero affiches: all are Italian history of art cases for an exhibition organized in Castel Sant’Angelo. Posters, logos and trademarks, next to commonly used and design items, paintings, photographs, films, and even interactive carpets are exhibited to tell about the best-known brands of Made in Italy, and to reveal hidden secrets between art, social habits and design in Italy. The exhibition conceived by “Innovarte”, is realized with the cooperation of the Cultural Board of Confindustria and Museimpresa. The international project will run the world, guest of many Italian Cultural Institutes. 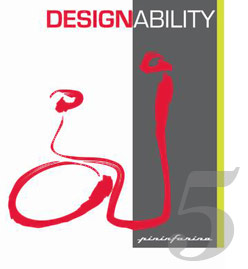 DesignAbility – Turin
To mark Turin 2008 World Design Capital, Pininfarina Extra, exhibits innovative solutions that combine design and practicality, allowing environments and products to be enjoyed also by people whose functions are limited. Inaugurated this month in the Pininfarina plant in Cambiano, DesignAbility is an exhibition that seeks to underline the importance of design in any field, used by all members of society, independently from their abilities. The public will have the chance to admire designs as the monoski for the special Olympics in Vancouver 2010 and the first electric wheelchair by Pininfarina design. 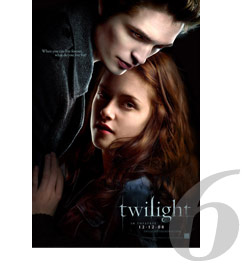 Twilight by Catherine Hardwicke
The movie Twilight (based on the first in Stephenie Meyer’s popular series of vampire romance novels) is the story of Bella Swan (Kristen Stewart), a sullen but sweet high-school student who falls in love with a tender vampire (Robert Pattinson) who is on a no-human-blood diet. A frenzy among teenage girls marked the picture’s arrival in theatres, with more than 1,000 screenings across the USA selling out days in advance. The opening-weekend gross beat any expectation, selling an estimated $70.6 million in tickets and proving that a wholesome love story can still turn out a huge young-adult audience. 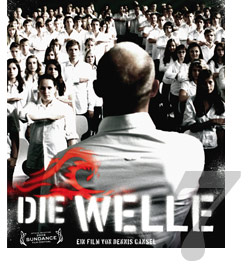 Die Welle by Dennis Gansel
Die Welle, a new movie by the German director Dennis Gansel, presented at the Torino Film Festival, is a story about a high school teacher’s unusual experiment. To demonstrate to his students what life is like under a dictatorship, the teacher build up a group of students based on two main values (discipline and order), with a name (The wave – Die Welle), a symbol, a specific language between members and a specific dress code. The experiment spins horribly out of control: he forms a social unit with a life of its own, based on fanaticism and violence, a cell of totalitarianism. 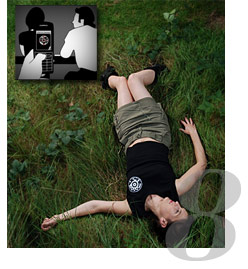 W-41: The social networking T shirt
At first glance, the W-41 looks like any other overpriced piece of minimal clothing, but there is much more to it than that. Each shirt comes with a personalized circular logo that functions in the same way as a bar code. If you’d like to learn something about the person wearing the shirt, all you have to do is take a picture of the design and a cell phone application (available for free download on www.w-41.com) will recognise the personalized logo and will go to the a link of the wearer’s choosing, whether it be their favorite website or online profile. They currently have three different styles for men and three different styles from women to choose from. 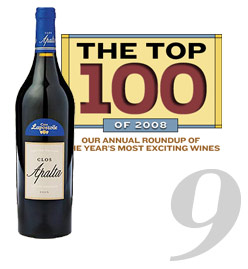 Chilean wine beats French and Italian and confirm itself as the best in the world
Wine Spectator, the american magazine that is universally considered as the «Bible» of wine, has published, its long awaited annual chart on the hundred best wine labels in commerce for 2008. The winning wine, debuting on the market with the 1997 vintage, is a blend of Carmènere, Cabernet Sauvignon, Merlot, Petit Verdot, produced in Chile’s Colchagua Apalta sub-valley with a production of around 72.000 bottles. Followed by the French and a Portuguese (Château Rauzan-Ségla, Margaux 2005; Quinta do Crasto, Douro Reserva Old Vines 2005; Château Guiraud, Sauternes 2005). The «top ten» is therefore already official decided and the only Italian in the line-up is the historic brand Pio Cesare di Alba with its 2004 Barolo. 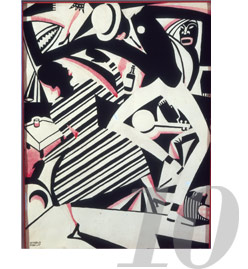