The Girl with the Dragon Tattoo by Niels Arden Oplev 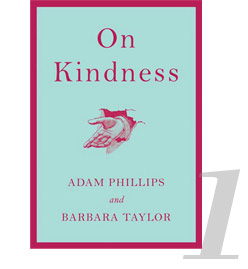 On Kindness by A. Phillips and B. Taylor
In our society kindness is considered less a positive value, but a proof of fragility. The two authors of this book wrote about this theme. The book describes how kindness is a very important value for having good relationships. Kindness is a sort of empathic activity: in fact, it is the capacity to feel and to “imagine” the other person. The intent of the book is not a moralistic one. To be kind is in fact, the best way for happiness in daily life and a topic for pleasure. Written by a history professor and a psychologist: the analysis is both from a historical and psychological point of view. Starting from the ancient Greeks till the contemporary, the theme of kindness is considered as an indispensable value for a satisfied life. 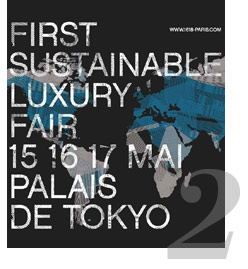 1618 Sustainable Luxury Fair – Paris
From the 15th till the 17th of May, Paris has seen the first edition of 1618, the sustainable luxury fair, made with the support of the WWF and the French Ministry of Culture. Thirty exhibitors presented their projects and products, meticulously selected by the organization. Everything, from products to services, were focused on the high quality and the special attention to sustainable materials and processes. Among the most interesting projects there was the Banc Miroir by Cécile Planchais, a bench made of reflective stainless steel, allowing the sky and the surroundings to be reflected in the object itself, which “disappears”.

Non sperate di liberarvi dai libri by Umberto Eco and Jean-Claude Carrière
A meeting between a writer (and semiologist) and a scriptwriter in Paris. And the following conversation – cultivated, ironic and full of facts and reflections – on the books’ future. Non sperate di liberarvi dei libri (Don’t hope to get free from books) is a love declaration by Umberto Eco and Jean-Claude Carrière toward the book world: the last bastion for the survival of memory. In fact they really survive compared to any further inventions. From the monks handwriting to the technical reproductivity, from papyrus to e-books, ‘the book’ still resists to the fast acceleration of information technology, demonstrating itself to be as important as the wheel : an invention that has not lost and that will never die! 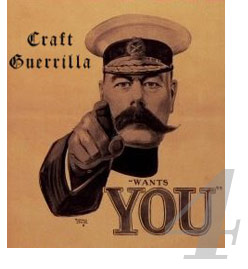 The Craft Guerrilla – London
The Craft Guerrilla is an association, which organises many events and promotes artistic craftsmanship with the use of recovered materials. The spirit of this initiative is that of sharing and the support of spontaneous creativity and independently supplies a series of services. As well as organising markets for sale and exchange, the scope of the association is that of pushing this community of creatives through a “friendly” business model that also consists in the circulation of ideas and possible contacts between the different components. Starting in May 2009 a series of workshops open to the city took place for the realisation of objects created totally from recycled materials. 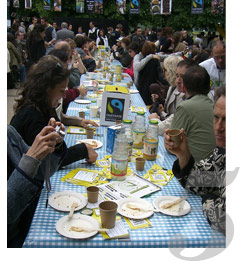 Giant Brunch – France
On the 9th May 2009, the date of the International Day of the Fair Trade, the Max Havelaar Foundation launched a special Fairtrade initiative in several cities across France: the Giant Brunch. During this “en plein air” event people of all ages had the opportunity to taste a wide range of Fairtrade products for breakfast, ranging from coffee, tea, juice and hot chocolate to chocolate spread, honey and jam, available in the shops. At the brunch, the participants also participated in numerous activities, such as dance, music, and games for children. Fairtrade also sold on its French site a “brunch kit” for people to organize their own brunch with Fairtrade products, sold in a reusable bag for 20 €. 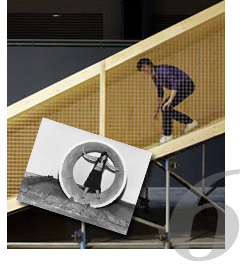 Bodymotionspacesthings installation by Robert Morris – Tate Modern – London
It is possible to climb, balance, crawl and roll on the interactive installation Bodymotionspacesthings by artist Robert Morris, as this series of huge props including beams, weights, platforms, rollers, tunnels and ramps built from materials such as plywood, stone, steel plate, and rope transforms the Turbine Hall. This is a re-creation of Tate Gallery’s first fully interactive exhibition which took place in 1971, inspiring a huge media and public interest, when an art gallery asked people for the first time to physically interact with an art work. Shockingly, it was closed just four days after opening, due to the unexpected and over enthusiastic response of the audience. Nowadays installation has been created using contemporary materials based upon the original plans. 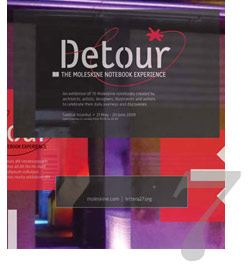 Detour Moleskine – Istanbul
On the 22nd of May Detour – the itinerant exhibition of Moleskine notebooks – arrives in Istanbul, hosted by Santralistanbul, the Energy Museum. 50 international artists’ notebooks will be exhibited; amongst them some works contain extensive stories and others are turned into pieces of contemporary art and design. Visitors will have the opportunity to observe (and touch, using the appropriate cotton gloves) the Moleskine notebooks of renowned artists, designers and architects – among which, Karim Rashid, Ron Arad, Han Tümertekin – and witness their creative process. 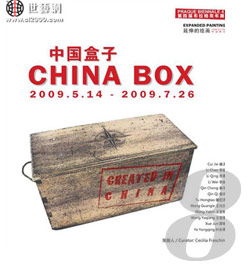 China Box Exhibit – Biennale 4 – Prague
The curator Cecilia Freschini has introduced, during the Biennale 4 in Prague, a collection of new contemporary paintings by twelve artists from China. The project is entitled China Box, which is a symbol of Chinese philosophy, wisdom and creativity. The China box can be seen as the basement of the social, economic and artistic structure of the Chinese macrocosm, which jealously preserves his heritage. Cui Jie, Li Chao, Li Qing, Li Wei, Qin Chong, Qin Qi, Tu Hongtao, Wang Guangle, Wang Yabin, Wang Yaqiang, Xue Jun, Ye Yongqing are the artists that were selected for this exhibit: each one, in different ways, strive to shine light upon their own cult. 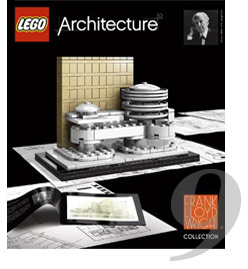 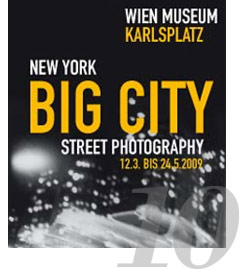 Big City Exhibit – Karlsplatz Museum – Wien
The Karlsplatz Vienna Museum’s Big City exhibition features around 150 photos of New York City in the 40′s, where Street photography first took off. Big City is referred to New York, stage for life where all can happen. Myth incarnation of the poliphormic and restless metropolis. To tell the story, there are images, especially in black & white, of eighteen big photographers, from the 40′s to the first 80′s, among which Walker Evans, Ted Croner, Robert Frank, Charles Harbutt, William Klein, Lee Friedlander, Diane Arbus, Garry Winogrand. Shots, like syncopated narrations picked straight off the mark: the crowd, the appearances, the characters, the roads, the lights, the glares, the shadows, the ghosts, the skyscrapers, the speed, the anger, the joy to live.