A Day Without Immigrants – USA 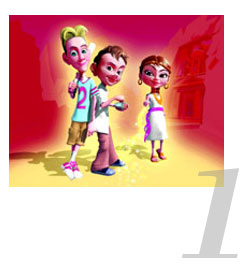 Ben & Izzy – USA
Layalina Productions, Inc. announced today that it has received a grant from The William and Flora Hewlett Foundation. The grant will underwrite part of the development and pre-production expenses for Ben & Izzy, including character development, bible, and pilot production. This cross-cultural children’s animation series will be co-produced by Layalina Productions of Washington, DC, and Rubicon of Amman, Jordan. David Pritchard, as Executive Director, will lead the creative team. Ben & Izzy will follow the exploits of two pre-teen boys, one Arab and one American. The boys meet in Amman, Jordan, where their respective grandfathers, who are archaeologists and life-long friends, are working on a massive excavation project. There, the mischievous boys become reluctant friends and discover, through their adventures with Yasmine, a long-locked-up genie, great historical moments in the Middle East and the United States. The series will use the boys’ adventures back in time to illustrate values and cultural developments common to the Arab world and the West. “We are thankful to The Hewlett Foundation for their contribution to Layalina for the purposes of ‘Ben & Izzy’”, added Randa Ayoubi, CEO of Rubicon in Amman, Jordan. “It clearly demonstrates the confidence in the concept, the partners and in the development that has taken place so far,” said Ayoubi. 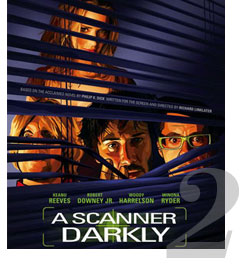 A Scanner Darkly by Richard Linklater
A Scanner Darkly, the new Linklater’s astonishing film, has been recently presented at Cannes film Festival obtaining great success surprise. Inspired by Philip Dick’s opera, the film had already became famous for its technical making: actors are first filmed and then painted on each single film frame, transforming a real shooting in cartoon. This expensive and elaborated technique, makes of this opera a masterpiece of contemporary art. All the characters, most of them well known Hollywood starts like Keanu Reevese and Winona Ryder, are like the ‘authors’ of he story itself which, as it always happens with respect to Dick’s literature, retains a strong grotesque and tragic element. 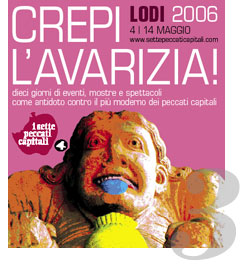 Seven Deadly Sins Festival: The Greed – Lodi, Italy
Lodi hosted the fourth edition of the Seven Deadly Sins Festival, dedicated to the Greed. Past editions where entitled to Wrath (2003), Gluttony (2004), and Pride (2005). The more relevant deadly sin in nowadays, the Greed, have been reviewed trying also to find possible solutions: the gift, the solidarity, the generosity, the conviviality. The Lodi review was an occasion to investigate a sin quite present in our era, and will try to introduce remedies like gift and generosity. 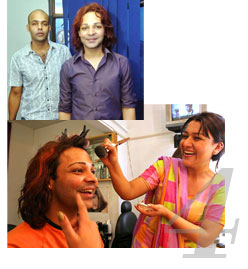 Late Night with Begum Nawazish Ali – Pakistan
At the leading edge of Pakistan’s television boom that followed the deregulation of the airwaves ordered by the Pakistani President Pervez Musharraf, the talk show Late Night with Begum Nawazish Ali is screened every Saturday night and has already captivated a young audience eager for satirization of Pakistan’s politicians and unafraid of sexual ambivalence. Politicians, show-business types and even Islamic leaders crowd every week to be interviewed by Ali Salim, or better with Mrs. Begum Nawazish Ali, the female character in which he turns himself onto, pushing at the boundaries of what is considered acceptable in this conservative country. Even if Salim’s show is not the only one that is revolutionizing television viewing in this Islamic society, it’s certainly the most provocative, proposing a man cross dressing and hosting an hourlong show on Saturday night debating social and political issues in a frivolous way. Fans say the show is a breath of fresh air. Facing fierce criticism, Salim says the show gives a light face to Pakistan, in contrast to the images of poverty, fanaticism and abuse of women Western media tend to focus on. 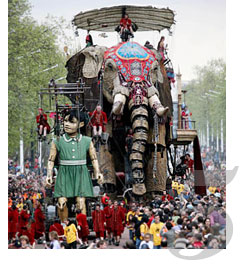 The Sultan’s Elephant by Royal de Lux – London
“The Sultan’s Elephant has come and gone. Created by theatrical magicians Royal de Luxe, it was an extraordinary experience for everyone who saw it. The majestic elephant and the little girl giant captured the hearts and minds of thousands of Londoners and visitors, and will live in our hearts and minds for years to come.” These were the words of Mayor Ken Livingstone introducing the piece of street art theatre that took place from 4 to 7 of May in London performed by Royal de Luxe, an extraordinary European street theatre company founded in 1979 by the French artist Jean Luc Courcoult. Everything happened as in a fairytale, starting from Thursday morning when commuters found in Waterloo Place what looked like a huge wooden torpedo embedded in the asphalt. Since then, the Sultan’s Elephant started to appear in the hottest spots of the city, a gigantic mechanic puppet leaded by a little girl the Lilliputian crowd looked at astonished. “Do you think it will spray water?” a little girls asked to a policewoman. “It might do, I would”, she answered. There was no branding, no signposts, no merchandising and no tickets required for the event, the growing crowd that gathered still asking themselves of what it was. 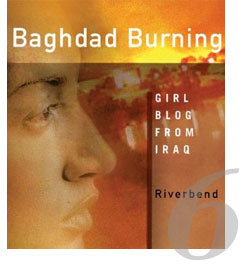 Baghdad Burning and The Iraqi Equation – Iraq
The book Baghdad Burning is born from a riveting weblog of a 25 years old remarkable Iraqi woman: the only Iraqi blogger writing from a woman’s perspective. Using the pseudonym ‘Riverbend’, she gives a human face to war and occupation. From the 24th of September 2003, in this hard-hitting journal, she has been described the day-to-day realities of life, including diary entries covering the release of many dramatic facts as well as a more critical analysis of key players during the war. The book is receiving a pubblic and opinion leaders’ spread appreciation and is listed for prestigious literary Awards. With thousands of loyal readers worldwide, the Riverbend blog (continuously updated) is recognized around the world as a crucial source of information not available through the mainstream media. The Iraqi Equation, at Fundació Antoni Tàpies of Barcelona, does not propose an exhibition of modern and contemporary Iraqi Art; rather, it provides a platform for information, meeting and debate open to artists, film makers, authors, analysts and activists able to throw some light on the historic, political, social and cultural context that has led to the present situation and to suggest possible ways out. The Iraqi Equation is the third part (after Beirut/Lebanon and Cairo/Egypt) of Contemporary Arab Representations: a long-term project that aim to enable production, circulation and exchanges between the different cultural centres in the Arab world and the rest of the world. 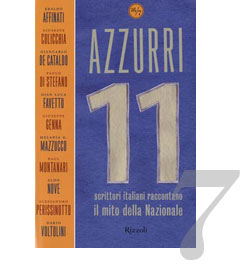 Azzurri – 11 italian writers narrating the italian national football team myth
In coincidence with the next World Football Championships in Germany, a new book Azzurri – 11 Italian writers narrating the Italian national football team myth was recently released in Italy. The eleven novels refer to relevant victory and defeats in the national football team history. The writers involved in this project are Eraldo Affinati, Giuseppe Culicchia, Giancarlo De Cataldo, Paolo Di Stefano, Gian Luca Favetto, Giuseppe Genna, Melania G. Mazzucco, Raul Montanari, Aldo Nove, Alessandro Perissinotto, Dario Voltolini. Each author wrote about this topic with a different approach, narrating real or fantastic facts. The novels make you feel sad, they enjoy or surprise you. Football can be the main character or in the background. Sometime football seems to be just a side effect.

Ikea Everyday Fabulous in Manhattan – New York
Even Ikea is joining the fun. Ikea has set up a temporary concept store in Manhattan called Everyday Fabulous. Located at 537 w. 35th. Street, the store is open from May 19 through May 23. You enter through a “funhall tunnel” reminiscent of a haunted house and wind up in a cavernous space filled with a whimsical display of Ikea home furnishings. One wall was composed of 39 bookcases filled with books, an impressive idea if one has the space. Ikea New York hosts a fabulous exhibition named Everyday Fabulous Exhibit. They invite people to come and see how good design can transform the most ordinary day into something spectacular. More interestingly, their design team transformed NYC locations with Ikea. In urban spaces every one can find Ikea products, such in the buses, in Central Park. 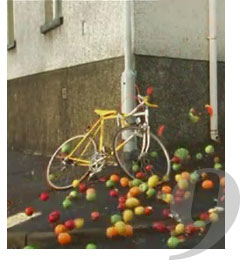 Tango Commercial – UK
At the beginning of May a strange viral started to spread over the Internet. It’s a commercial for Tango (the fruit soft drink owned by the British Company Britvic) which is a clever parody of the famous Sony Bravia commercial featuring hundreds of thousands of colourful bouncing balls. In the new Tango commercial the bouncing balls are replaced with apples, peaches, watermelons and so on, which causes funny and unexpected effects while rolling down the streets of a small village. At the same time an apparently amateur site appeared on the web: in fact, the Swansea North Resident’s Association have set up a site to complain about the mess left behind by Tango’s Sony Bravia parody. This site is nothing but a fake, designed by Chi Advertising, Tango’s creative agency. 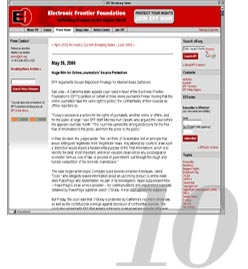 Bloggers can shield sources, court rules – USA
In a decision that could set the tone for journalism in the digital age, a California appeals court ruled that bloggers, like traditional reporters, have the right to keep their sources confidential. A panel of three judges said that a group of bloggers did not have to divulge their sources to Apple Computer, contending that the same law that protects traditional journalists, the First Amendment, also apply to bloggers. This was a huge win for the First Amendment and for journalists who publish online because the court recognized that, in the modern era, one way journalists publish information is through the Internet.