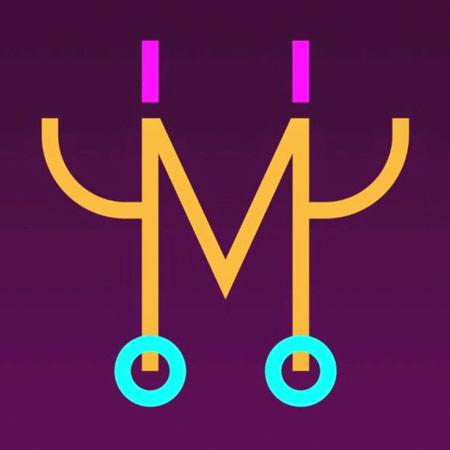 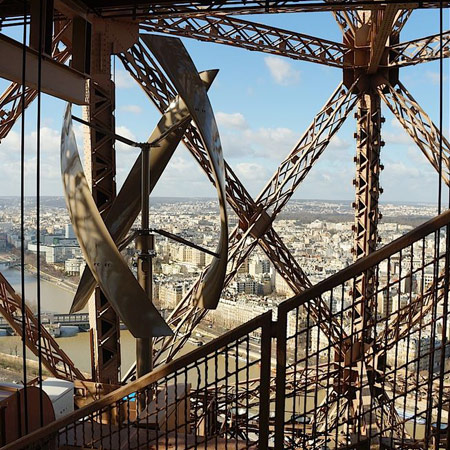 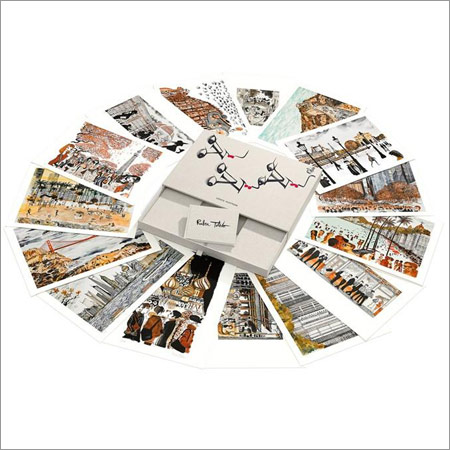 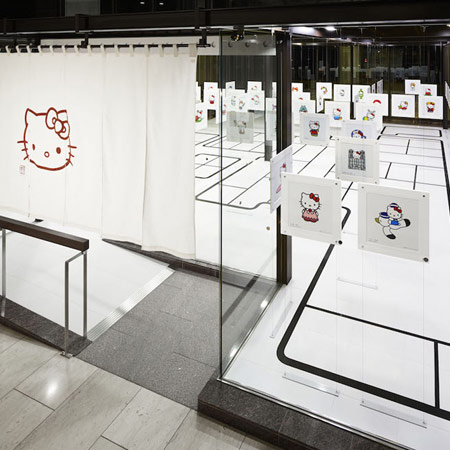 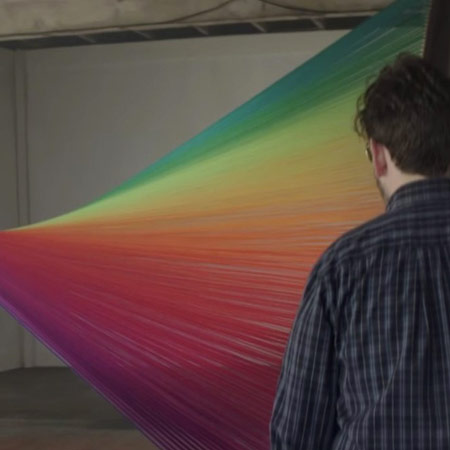 Color For The Colorblind video by Valspar 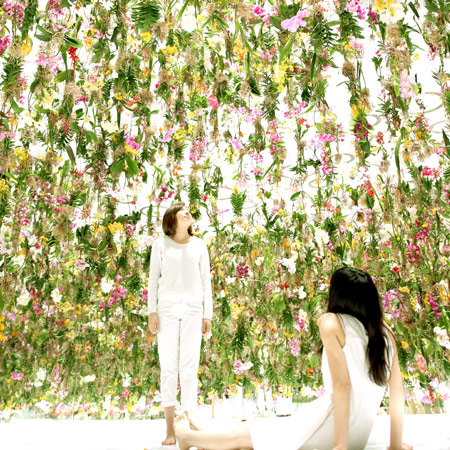 Floating Flower Garden installation by teamLab – Miraikan National Museum of Emerging Science and Innovation – Tokyo
Floating Flower Garden, on display at the Miraikan National Museum of Emerging Science and Innovation in Tokyo and the handiwork of teamLab, a collective made up of tech specialists based in Tokyo, is an immersive, interactive installation of blossoming vegetation. 2,300 flowers are suspended in a room and respond when a visitor enters the space, moving towards them and floating close above their head. The installation responds to one or more viewers at once, allowing for constant free movement within and when two viewers meet their spaces merge into one single dome. In this interactive floating flower garden viewers are immersed in flowers, and become completely one with the garden itself. The plants are alive and growing with each passing day. Each flower has a partner insect and the scent of the flowers becomes stronger at the time that the insect is most active, as a result the scent of the air in the garden space changes according to the time of day. 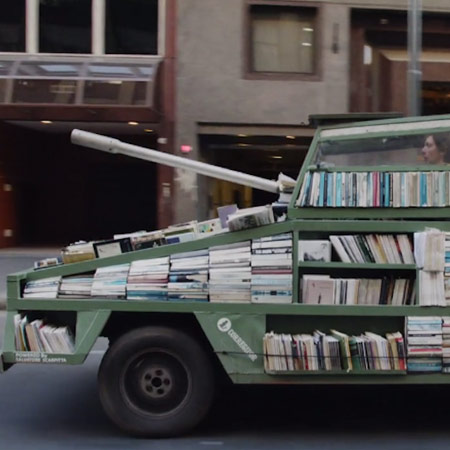 #FeelsGoodToBeYou 7UO campaign by Raul Lemesoff – Argentina
For the campaign #FeelsGoodToBeYou launched by 7UP, the Argentine artist Raul Lemesoff transformed a 1979 Ford Falcon in a mock tank that is touring Argentina, starting from Buenos Aires, in order to distribute books in all urban centers and rural areas. The vehicle can hold up to 900 books, crammed on some shelves. The promotional video shows Lemesoff while he distributes the free books carried on the tank as long as the people who take them really read them. “My missions are very dangerous, ” says the artist in the video on the project. “I attack people in a cute and funny manner.” 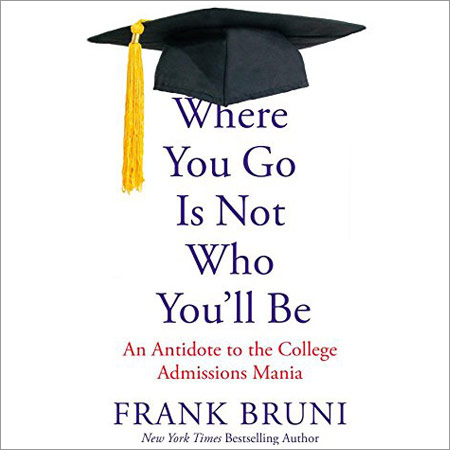 Where You Go Is Not Who You’ll Be: An Antidote to the College Admissions Mania by Frank Bruni
Over the last few decades, Americans have turned college admissions into a terrifying and occasionally devastating process, preceded by test prep, tutors, all sorts of stratagems, all kinds of rankings, and a conviction among too many young people that their futures will be determined by which schools say yes and which say no. That belief is wrong. It’s cruel. And in Where You Go Is Not Who You’ll Be, Frank Bruni explains why, giving students and their parents a new perspective on this brutal, deeply flawed competition and a path out of the anxiety that it provokes. Bruni, a bestselling author and a columnist for the New York Times, shows that the Ivy League has no monopoly on corner offices, governors’ mansions, or the most prestigious academic and scientific grants. Through statistics, surveys, and the stories of hugely successful people who didn’t attend the most exclusive schools, he demonstrates that many kinds of colleges-large public universities, tiny hideaways in the hinterlands serve as ideal springboards. What matters in the end are a student’s efforts in and out of the classroom, not the gleam of his or her diploma. 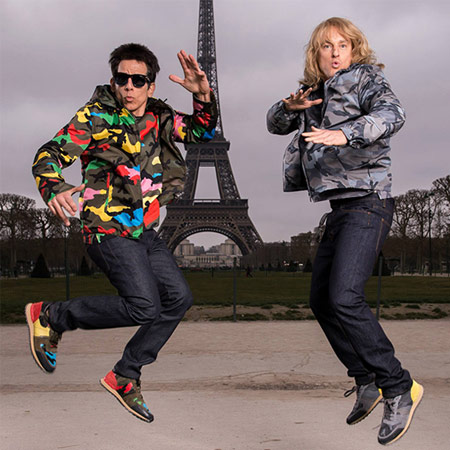 Zoolander for Valentino – Paris
On the catwalk fashion show in Paris Valentino, the last exit has reserved an “unexpected” surprise: Ben Stiller and Owen Wilson in the role of Derek and Hansel, the protagonists of the cult film Zoolander. The two “beautiful beautiful so absurd” stormed the catwalk of the legendary Italian brand, with an extraordinary irony, exaggerating the moves of the models and of course showing off their famous “Magum”expression, picking up a media success overwhelming. Public enthusiastic, selfie with Anna Wintour, social crazed. A brilliant operation by the two designers Maria Grazia Chiuri and Pierpaolo Piccioli, who drive the creativity of the fashion house with great skill and undoubted success, affording a good dose of self-irony is not always present in fashion. 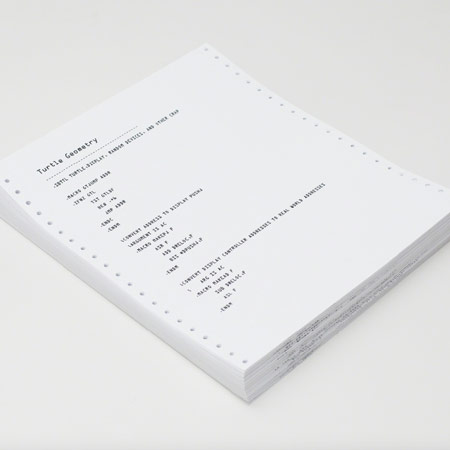 The world’s first Algorithm Auction by Artsy
Artsy the world’s largest online database of contemporary art launched the first auction celebrating the art of code, “the powerful medium of pure code, which has intimately inserted itself into the lives of billions around the globe”. Algorithm Auction created by Ruse Laboratories consisted of seven notable works of code and algorithms available online for 10 days (18-27 March) to benefit the Cooper Hewitt, Smithsonian Design Museum. The selected algorithms represent groundbreaking and unique moments in the history of this discipline, including the Hal Abelson’s Turtle Geometry, a display of President Obama’s first line of code auctioned off for $1,400 or Brian Kernigham’s Hello World, two lines of the iconic greeting notorious for welcoming programmers to code, for which 8 bidders reached $4,000. 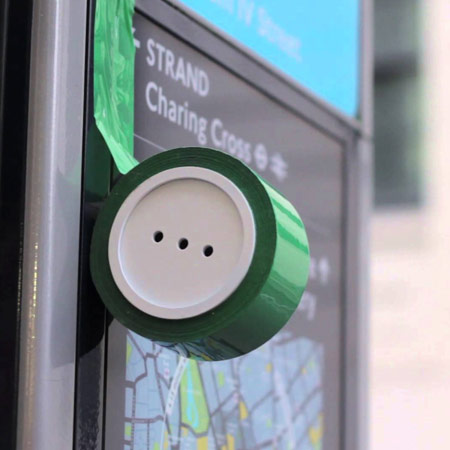 PSSST The Speaker – London
Created by a group of students at the Royal College of Art London, PSSST the Speaker aims to facilitate citizens the support for open causes taking a position between extreme activism and easy slacktivism. People that visit the online platform find a variety of causes to support (including immigration issues, public transit cost or unpaid internships) and it is possible to request a speaker to deploy for a new or existing cause. Users lease a speaker to broadcast messages (approved by the PSSST community) that then can be placed in different locations around the city as a tape roll. The message is broadcast where people is close to the device. In the website is possible to follow the speaker location, real-time data, keeping track of speakers and supporters of each cause. After experimentation with smell and audio, the project was inspired by how ants work together toward a common goal and use pheromone communication. 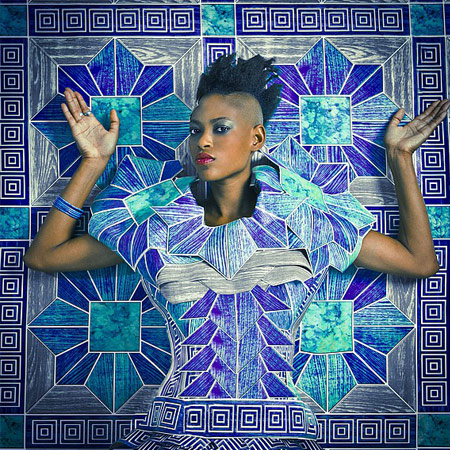 Making Africa exhibit – Vitra Design Museum – Weil am Rhein – Germany
A major exhibition by the Vitra Design Museum sheds new light on contemporary African design. Showcasing the work of over 120 artists and designers, Making Africa – A Continent of Contemporary Design illustrates how design accompanies and fuels economic and political changes on the continent. Africa is presented as a hub of experimentation generating new approaches and solutions of worldwide relevance – and as a driving force for a new discussion of the potential of design in the twenty-first century. There is a huge development that has already altered the everyday lives of all Africans and yields a significant influence upon the work of artists and designers: at present, there are already 650 million registered mobile phones in Africa, more than in Europe or the US. Many of these devices have access to the Internet and thus create a platform for communication and the exchange of information, that enabled the shift in perspective that lies at the centre of the exhibition: a new generation of entrepreneurs, thinkers and designers from and within Africa, who – as digital natives – address a global audience and provide the world with a new vantage point on their continent. 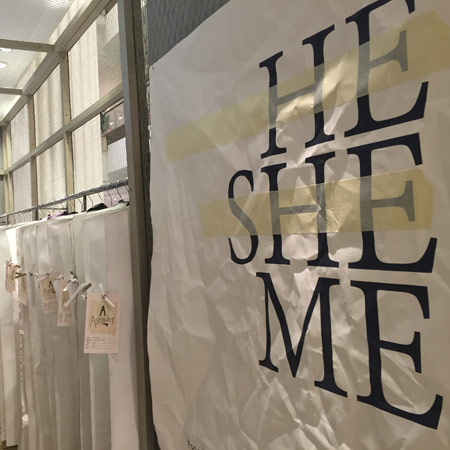 Agender at Selfridges – London
London department store Selfridges has launched Agender, a gender-neutral pop-up retail space included on three of its four floors. “We want to take our customers on a journey where they can shop and dress without limitations or stereotypes,” the store said in a statement. “A space where clothing is no longer imbued with directive gender values, enabling fashion to exist as a purer expression of self.” Designer Faye Toogood was in charge of designing the concept. Some of the brands for sale in this new area are Body Map, Nicopanda, Rad Hourani, and VFiles. The launch campaign included dedicated strew windows and street-style pictures shot by Scott Schumann of The Sartorialist. 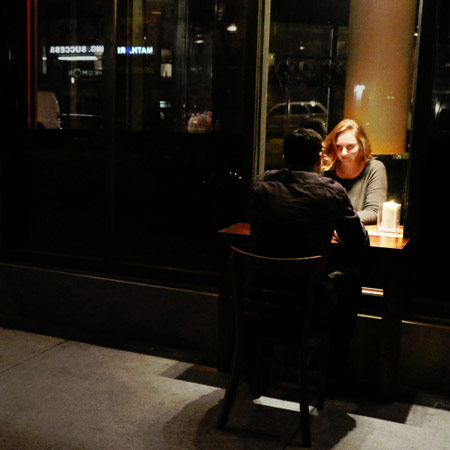 Table for Two Installation – New York
Table for Two is an installation by Paris-born artist Shani Ha. Part sculpture, part performance art, it challenges those who sit down to look up from their smartphones and into the eyes of a friend, a stranger, or their own reflections in the glass. The installation has already yielded plenty of unusual interactions. One day, Ha says she saw two deaf people communicate through the glass using sign language, as if there were no barrier between them. On another occasion, a couple talked to each other on the phone, like an inmate and a visitor in a prison booth. A self-conscious homage to Edward Hopper’s Nighthawks, the work realizes the age-old concept of the big, crowded city as a lonely, isolating place. 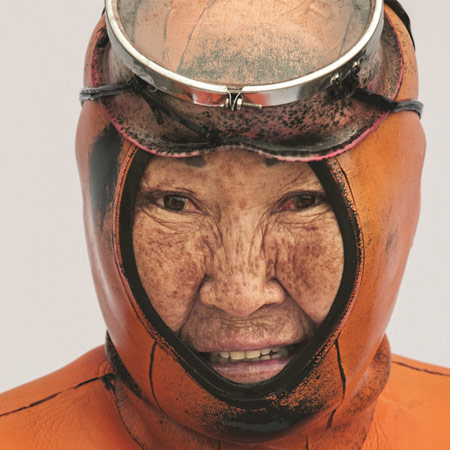 Haenyeo (Women of the sea) exhibition by di Hyung. S. Kim – Gallery Korea – New York
Haenyeo exhibition features photography and video art focused on the extraordinary lives of Korean female free divers called haenyeo by Hyung S. Kim who captures the true reflection of their lives on Jeju Island. This collection has been in production since 2012, when Kim first became fascinated by the historical background and captivating lives of haenyeo who have embodied the core strength of Jeju’s culture. Kim has since been residing on the Island, capturing their most natural states as they come out of their deep dives. Haenyeo are one of Korea’s most important cultural assets, the female divers who harvest seafood by diving into the ocean without diving equipment or breathing apparatus. The haenyeo culture is Korea’s unique indigenous cultural heritage that has a history that goes back to the primitive age and have been noted in literature since 1105. This exhibition is presented in part with the 2015 Asia Week New York.