If We Ran the World – charitable social network 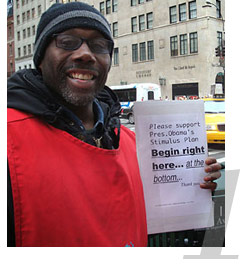 Gay Talese writes signs for the homeless – New York
Famous writer Gay Talese has written a post about writing some more timely signs for homeless people. He replaced one homeless man’s sign, which read “Homeless. Please help,” with the words “Please Support Pres. Obama’s Stimulus Plan, and begin right here … at the bottom … Thank you.” Later, when Talese went home, he created about two dozen signs about Obama’s stimulus plan and distributed them random to people who approached him for money. Talese plans to monitor their success, but yet one told him that he made 10 or 20 dollars more than ever. So maybe the sign is already working. 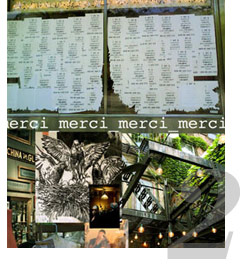 Merci: a new concept store for luxury and sustainability – Paris
Bernard and Marie-France Cohen, the two well-known entrepreneurs that launched the luxury children’s clothing brand Bonpoint, opened their new store Merci the 5th of March in Paris. Located at 111 Boulevard Beaumarchais in the 11th arrondissement, the shop gives luxury customers exactly what they need right now: guilt-free shopping. All the profits after costs in fact will go to a children’s charity in Madagascar. The 1,500 square meters of the three floors store show a flower shop and a used bookstore at the entrance, a perfume bar by Annick Goutal, designers and vintage corners where brands like YSL, Stella McCartney, Azzaro, Alexis Mabille and Marni are sold with a 40% discount. Down in the basement is an Ali Baba’s cave of knickknacks and home supplies and a restaurant serving seasonal products with a well-stocked wine-bar. 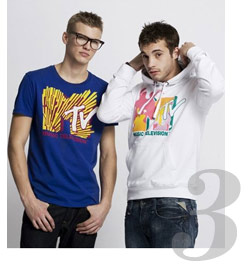 Streetmuse – Zara & MTV
Zara launches MTV Streetmuse for Men: the international fashion retailer Zara are partnering on a new range of urban-inspired men’s T-shirts and hoodies called Streetmuse by MTV. Rolling out internationally on March 5th and continuing throughout the year, Streetmuse will be available in front-of-store locations in more than 1,000 Zara stores, in 68 countries across Asia, Canada, Europe, the Middle East, North Africa and Latin America. MTV’s Streetmuse will be featured in two separate shop window displays in more than 400 locations including London’s Oxford Street, Paris’ Champs-Elysees, Berlin’s Ku’Damm and Milan’s Corso Buenos Aires. The collection exploits the collision of street culture with music, art, dance, innovation and attitude, with graphic designs that reference urban world city landscapes. 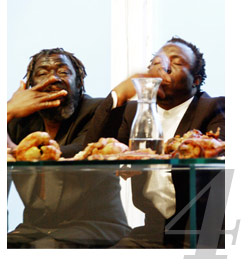 Vanessa Beecroft VB65 Live Performance – PAC – Milan
Known for her performances during which numerous models enact the ritual of being and appearing, Vanessa Beecroft is one of the most internationally recognized Italian artists. VB65 is her latest performance, which took place at the PAC museum in Milan on the 16th of March 2009. For the first time in her career, Beecroft has made a performance composed only of men, 20 African immigrants, seated at a 12m long table, dining as if at a last supper, dressed formally, a few did not wear shoes, but all were wearing black dinner jackets, suits, eating chicken, brown bread, drinking water, without platters or silverware, in front of an audience of invited guests. The 20 hosts of the supper sat silently eating during the opening (for 3 hours). 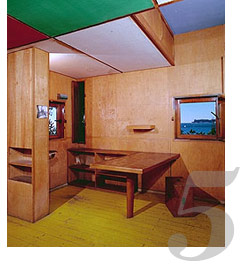 Exhibit Le Corbusier’s Cabanon 1952/2006 – The Interior 1:1 by RIBA & Cassina – London
Cabanon is a diminutive of the French word for “cabin”, but carries a number of additional meanings, such as describing the little structures scattered all over the south of France used by shepherds. And it is in Cap Martin in the French Riviera that Le Corbusier, one of the most influential architects of the 20th century, chose to build his own holiday home: Le Cabanon, a micro-architecture of 14 square metres, with most of the furniture being built-in. A note in his journal says he sketched the cabanon in 45 minutes. The reconstruction of his cabanon is on show, until the 28th of April, at the RIBA in London. 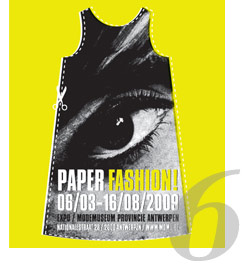 Paper Fashion! exhibit – Mode Museum – Antwerp – Belgium
Paper has been used in fashion in various cultures and historical periods, but it is still a little known and little studied phenomenon. With the exhibition, Paper Fashion! the Fashion Museum, reveals this exceptional niche in the history of fashion. In 1966, Scott Paper Company of the United States introduced the first throwaway paper dress as a propaganda stunt for their products. Almost instantly, paper clothes became a much-hyped phenomenon. Produced with conspicuous and colourful prints, paper clothing became promotional material for the most diverse of objectives. From Pop art to political campaign slogans – everything was possible. By the end of the 1960s, the trend had passed its peak and ‘paper fashion’ gradually disappeared from the high streets of the West. 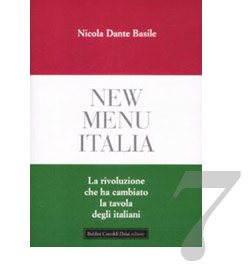 New Menu Italia by Nicola Dante Basile
In the book New Menu Italia the Italian journalist of Sole 24 Ore newspaper, Nicola Dante Basile, analyses the changes in the Italian food culture during the last twenty years. The book shows a picture of what actually is proposed by 70 excellent Italian brands of food industry. Inside the book it is also underlined the importance of the role of these brands to promote the Italian excellence of food industry inside and abroad. Inside this book the journalist has collected some informations about the choices made by the brands – some unknown and some very wellknown – to became successful case histories, recent or long-standing ones. It should be noted that world wide 20.000 new food items are produced a year, whose nearly 2.000 are produced in Italy. 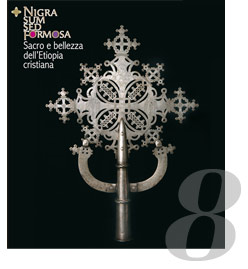 Nigra Sum Sed Formosa exhibition – Ca’ Foscari – Venice
In Italy for the first time a major exhibition has been opened on a region of Christian Africa, Ethiopia, with icons, illustrated manuscripts, crosses, sculptures, paintings of evocative beauty, never before shown to the public. The title of the exhibition is Nigra sum sed formosa,(I am dark but lovely): these words from the Song of Songs are traditionally seen in reference to the queen of Sheba, the progenitor of Ethiopia in the national epic poem “Kebra Negast,” the glory of kings. This nation and its Christianity are still remote today, but the exhibition wish to mark the end of isolation. Finally, attention is turning to this astonishing Christianity on African soil. 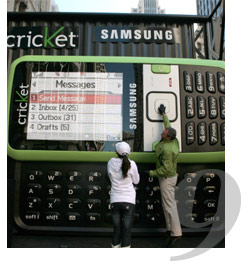 World’s largest cell phone unveiled by Samsung – Chicago
Samsung Telecommunications America and Cricket, a leading provider of unlimited wireless services, unveiled the world’s largest working cell phone in Fidelty Plaza downtown Chicago. The phone is a working replica of a Samsung Messager phone and measures approximately 15′ long, 13′ high and 3′ deep. Cricket has invited all Chicagoans to visit Pioneer Court and make unlimited, free phone calls and texts on the life-size Samsung Messager. There will be a range of special events including a texting challenge and a video booth. An adjudicator from Guinness World Records confirmed that the phone would be making it into the next book. The project is part of the get some respekt campaign by Cricket. 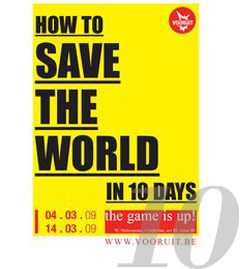 How To Save The World in 10 Days Festival – Vooruit art center – Ghent – Belgium
This year’s edition of The Game Is Up!, a festival organized by the Vooruit art center is brazenly titled How To Save the World in 10 Days. The festival is not going to provide fail-proof recipes to get us out of these issue: “From small interventions to grand utopian visions, from ecological labs to socio-political dystopias. It’s true that this festival won’t save the world. But as Marge Simpson once said to her husband Homer : “I do not hate you for failing, I love you for trying…”. The festival is a mix of low tech, no-tech and high-tech installations, performances, graffiti, workshops and debates. There is something likely to appeal to everyone: children, the usual art and tech crowd, the crowd that likes art but doesn’t get tech so much, the cynical and the hopeful.