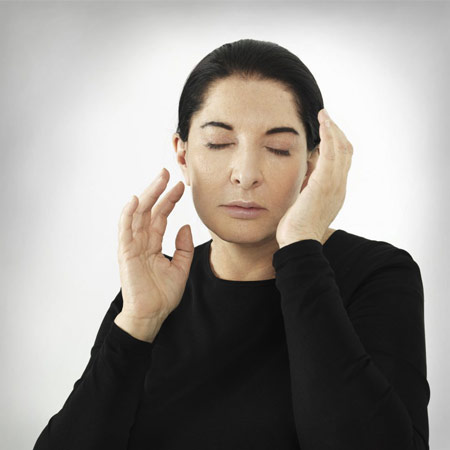 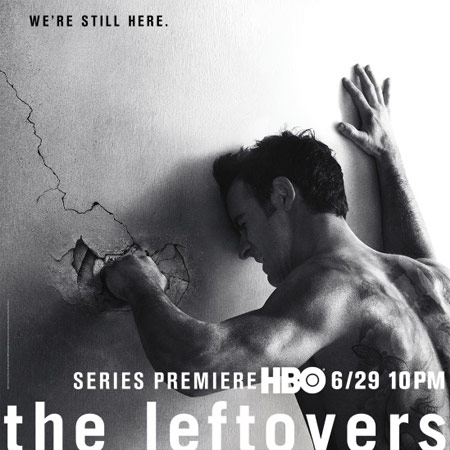 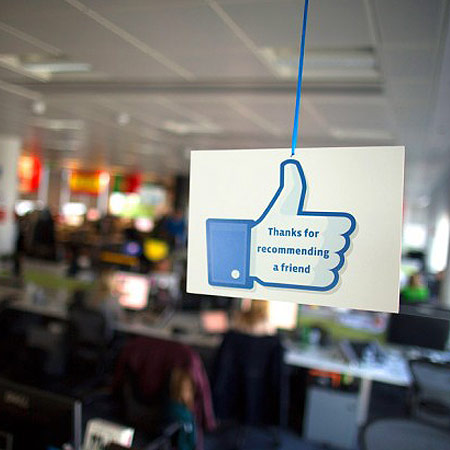 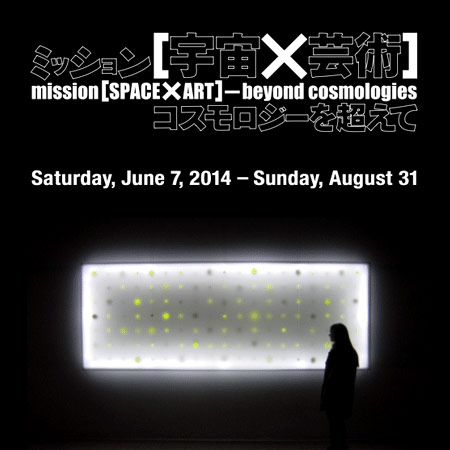 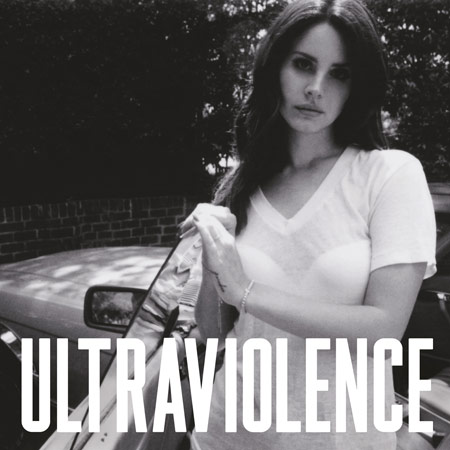 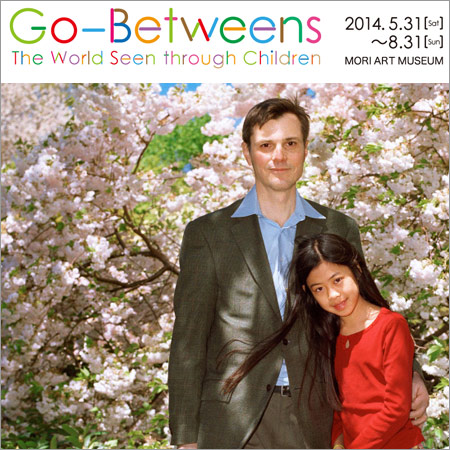 Go-Betweens: the world seen through children exhibit – Mori Art Museum – Tokyo
The Mori Art Museum in Tokyo hosts the exhibition Go-Betweens: the world seen through children. The inspiration for the exhibition comes from the work of photographer Jacob A. Riis, who documented the life of the poor immigrants in New York in the late 19th century and “coined” the term Betweens, referring to their children who have taken the central role to bridge cultural and linguistic life and the integration of their parents. The exhibition focuses, therefore, on the childlike quality to move freely through all sorts of borders – between cultures or between reality and fantasy – with the intention of looking at the world through their eyes. The path of the works proposed by 26 artists from around the world, addressing politics, culture, family, education and many other issues that small face daily. Looking at the way in which children cross the border, we explore the opportunity of a new world in which diversity coexist. 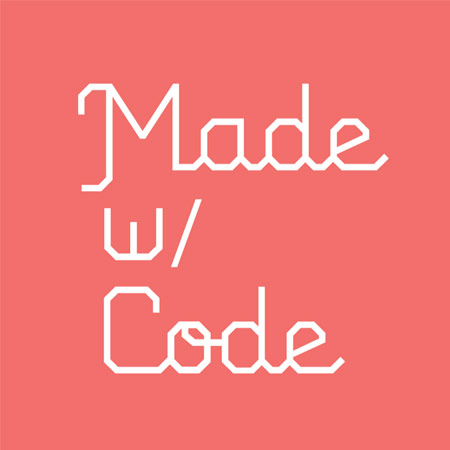 Google: Made with Code – USA
Google has promised to do all it can to recruit more women into Silicon Valley, launching a $50 million initiative Made with Code, teaching young girls how to code. Through research, Google found that there are four major factors determining whether girls study computer science: social encouragement, self-perception, academic exposure and career perception. So, the idea behind the initiative is to show young girls that the things they love, from apps on their smartphones to their favorite movies are made with code, and they can apply the skills they learn to their own individual passions. Girls and their parents now have a national resource directory they can use to find information about local events, camps, classes and clubs. Made with Code launched in partnership with Chelsea Clinton, Mindy Kaling, MIT Media Lab and the National Center for Women & Information Technology. 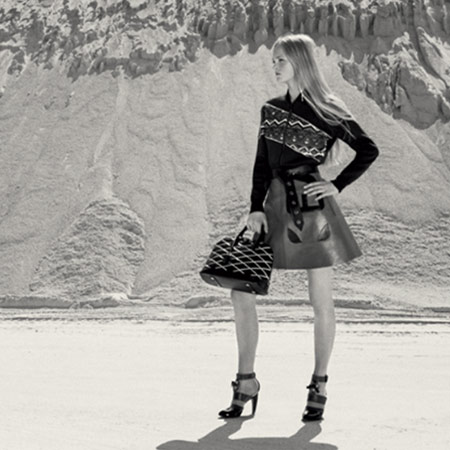 Louis Vuitton’s Fall 2014 Campaign
Nicolas Ghesquière is the new designer for Louis Vuitton’s collections. For its first ad campaign with the historic french luxury brand, he’s decided to involve not one, but three of the best living photographers. In fact, the Autumn 2014 collection is being presented through the works of Annie Leibovitz, Bruce Weber, and Juergen Teller. The three photographers were given a simple yet clear brief: “classic beauty meeting creative innovation.” The choice of the protagonists of the 3 shootings — actress Charlotte Gainsbourg and models Liya Kebede, Freja Beha Erichsen and Jean Campbell — was made according to the idea of finding “contemporary heroines”. The final selection of images is combined to form a “fashion gallery” which closely recalls a highly artistic approach. 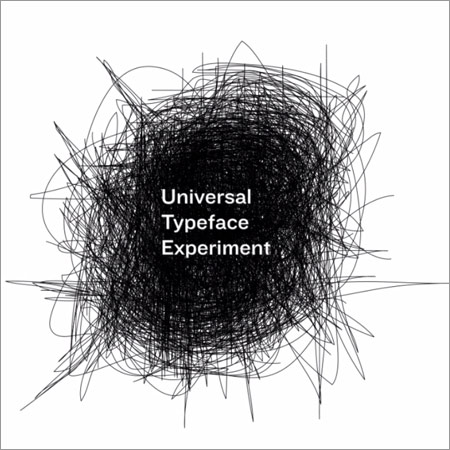 The Universal Typeface by BIC Pens
BIC has presented the universal typeface after crowdsourcing mobile contributions from all over the world. The Universal Typeface experiment is a project to celebrate the BIC Cristal ballpoint, which is the bestseller pen ever, with over 100 billion produced since 1950. The open call to digitally add writing contributions received more than 430,000 characters from 99 countries on a website where is possible to explore different typefaces by social characteristics as gender, age, location, industry, and handedness (left-handed or right-handed). A specially developed algorithm calculated the average, merging contributions into a single, ever-changing and always evolving typeface. Eric Schoeffler of DDB Worldwide, who designed the experiment, highlights how “BIC proves than analogue and digital can not only co-exist, but also enrich their co-existence”. 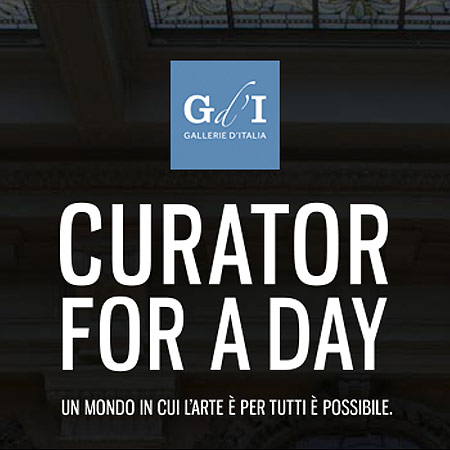 Curator for a Day – Gallerie d’Italia
Curator for a Day is an initiative of the Intesa Sanpaolo banking group for the dissemination of culture to an even wider audience, while offering its museums – the Gallerie d’Italia in Milan, Naples and Vicenza – a new and more active participation, with particular attention to young people. The goal is to allow anyone to interpretate and tell a work hosted at on of the Gallerie d’Italia: the public can select one of the works (displayed in a gallery on the website) and propose, through a video, a personal interpretation using different media: music, dance, drama, visual arts, performance. The selected ideas will be implemented as a performance and presented at the related museum and then spread in the form of video on the digital platforms of Intesa Sanpaolo and Gallerie d’Italia. 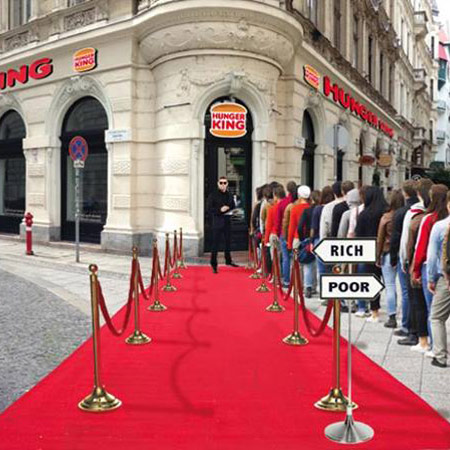 Hunger King installation by Jani Leinonen – Budapest
Finnish artist Jani Leinonen has set up a Hunger King installation in Budapest that draws attention to Hungary’s conflicting policies toward the rich and the poor. Visitors choose between getting in “rich” or “poor” lines, with signage on either side revealing stats about inequality in taxes and education opportunities, fines for vagrancy, and other points. The first 50 people in the “poor” line each day are greeted with a clamshell burger box holding the equivalent of about $15, the daily minimum wage in Budapest. Visitors to the “rich” line get a fake burger and fake fries, and an appeal toward activism. Highlighting Hungary’s controversial treatment of its poor and homeless populations, Leinonen’s exhibit uses corporate signage to critique the widening gap between the rich and the poor. Instead of Coca-Cola, Pepsi, Fanta products, for example, the exhibit offers patrons “capitalism” “lust” or “anger” out of its faux soda fountain machine. 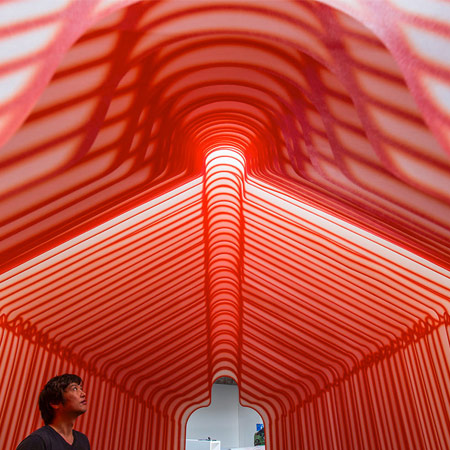 4Habitats installation by Suh Architects – Dongdaemun Design Plaza – Seoul
Suh Architects has interpreted the vision of Korean-based Kolon corporation in an immersive installation of kaleidoscopic habitats at Dongdaemun Design Plaza. Kolon industrial products range from fibers, and films, to textiles, which have been the inspiration for create four different habitats to explore different ideologies of human profiles and selves people inhabit as solitary and social beings: one to infinity, one to higher self, one to many, and one to only. The 4Habitat stands tall at 4m have been created using 160 hanging layers, printing off roll of raw Spunbond, a textile non-textile obtained from polyester fibers. Each habitat is portable and reconfigurable, designed to be adapted to the location that hosts them. The internal view perceived, as visitors walk through each structure is a colorful massive composition of layers that carve out a space from curved contours perspectives. 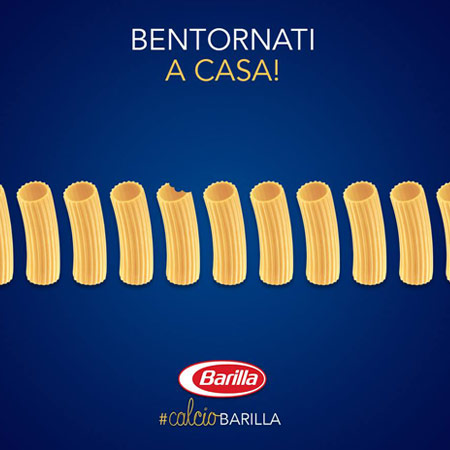 #calcioBarilla by Barilla
On the occasion of the FIFA World Cup, Barilla decided to adopt a real time marketing approach, through the hashtag #calcioBarilla. Using Twitter with irony and sarcasm, Barilla has accompanied every important step of the Italian national football team in Brazil and to do so the Brand used its famous pasta. The campaign (curated by Ambito5) generated 13 thousand interactions, reaching over 6 million users 8 million impressions. The most successful tweet was related to the return to Italy of the team (“A hit and run championship! Thank you for supporting Italy with us! @Vivo_Azzurro #CalcioBarilla”) and was retweeted over 700 times. 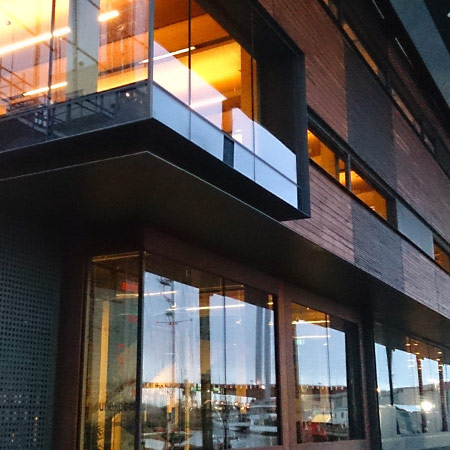 Library at Dock: Australia’s first public CLT building opening – Melbourne
A state-of-the-art library that combines traditional books, digital technology and sustainable architecture has opened at Melbourne’s Docklands. Located at Victoria Harbour, the traditional library component of the site will be part of a larger community hub that includes a recording studio, editing suites, community spaces and a performance venue that can hold up to 120 people. It will also offer an interactive children’s playground and green space across the precinct. Constructed primarily from cross laminated timber (CLT) and recycled hardwood, Library at the Dock has been rated with a six-star Green Star energy efficiency, making it Australia’s most sustainable, community building. Library at the Dock is a 18-metre building spanning three storeys which sits upon a heritage wharf originally built in 1879. It was built using 574 cubic metres of CLT, along with engineered timber and reclaimed wood. The use of CLT made the structure one-third lighter than a similar building made of more traditional materials, allowing it to be built on the wharf. Library at the Dock is the first Australian public building to be constructed with CLT, a material which is becoming widely recognised for its structural integrity and its ability to compete with conventional concrete and steel materials. 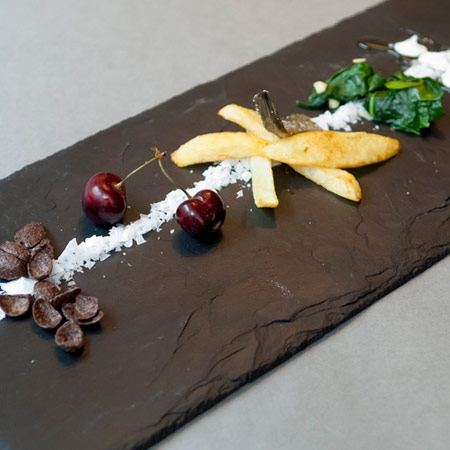 Data Cuisine Workshop – Barcelona
On June 10th, Data Cuisine, a project developed by Susanne Jaschko and Moritz Stefaner – a recognized interaction designer who has developed sophisticated visualizations for FIFA, Skype or the World Economic Forum – organized their second workshop with a group of fifteen chefs and data visualizers gathered at the Center of Contemporary Culture of Barcelona (CCCB), where they collected data about the city. The aim of the workshop was to develop a menu of edible infographics that visually represent Spain’s multiple languages, political ideologies, and social customs that stem from geographic and demographic diversity, all prepared with the assistance of professional chefs.