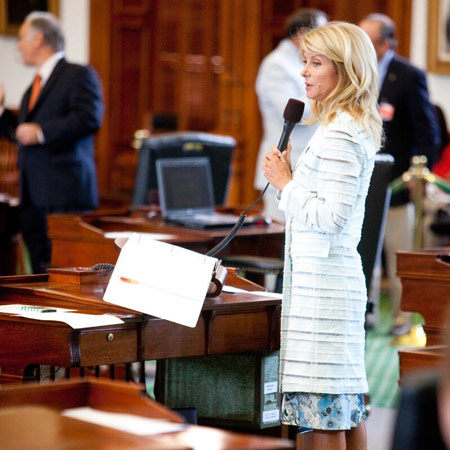 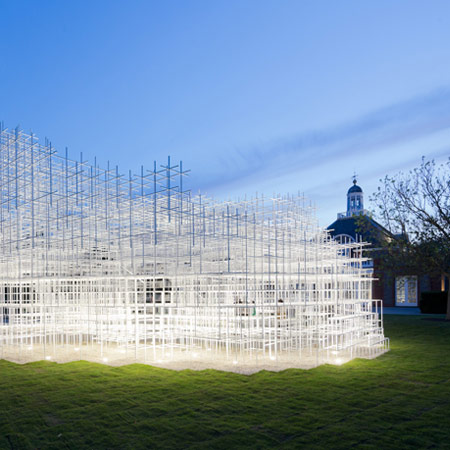 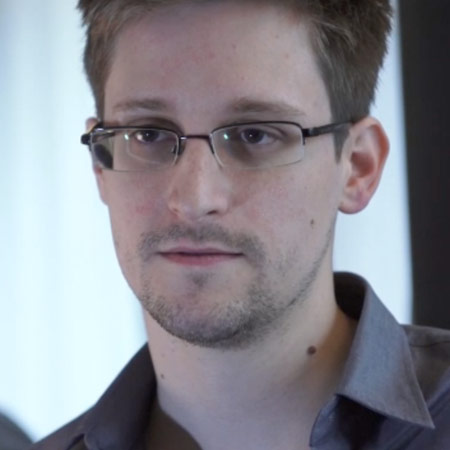 Edward Snowden: the whistleblower behind the NSA surveillance revelations 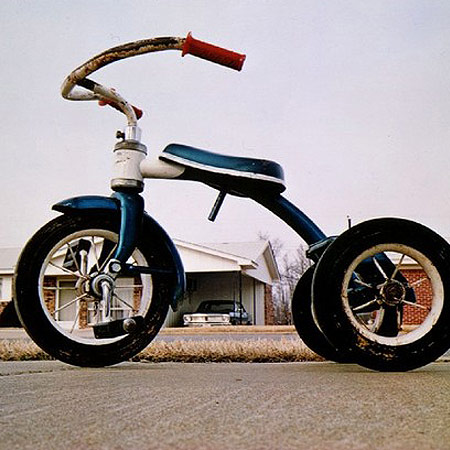 A Democracy of Images: Photographs from the Smithsonian American Art Museum exhibit – Washington 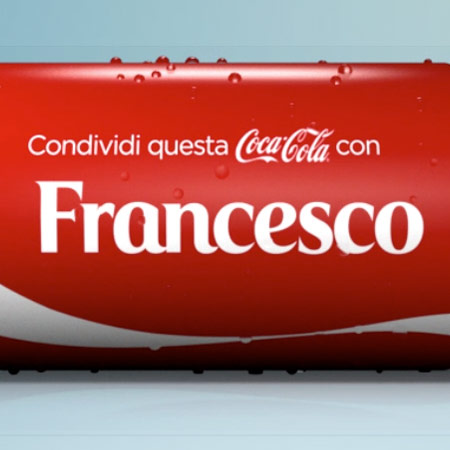 Is your name on a Coca-Cola? Campaign – Italy 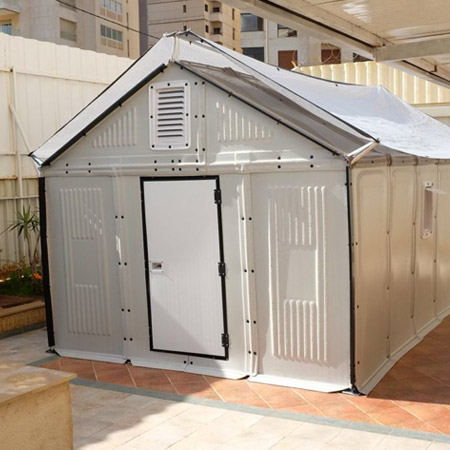 Designing a better home for refugee children by IKEA
To mark the occasion of World Refugee Day on June 20th, the IKEA Foundation announced an important new collaboration with the UN Refugee Agency (UNHCR) to design a new type of shelter that will replace the outdated tents currently in use in refugee camps worldwide. As you’d expect from IKEA, the result is a flat-packed, modular design (ideal for cheaply transporting to refugee camps) that can be assembled in 4 hours. It will last much longer than the tents, which must be replaced roughly every six months – a particularly important improvement, as the average family stays in a refugee camp for 12 years. The design also carries a number of other advantages, such as increased space and privacy, better temperature control and enough solar energy to power a light in the evening. 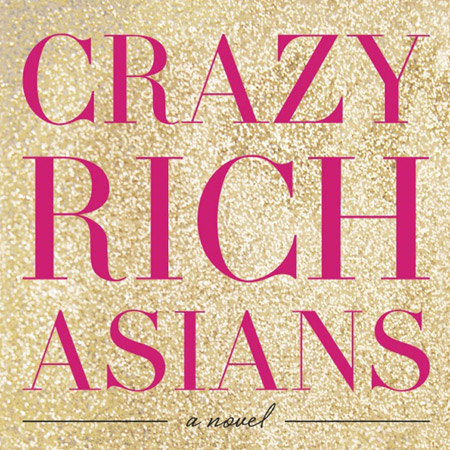 Crazy Rich Asians novel by Kevin Kwan
Crazy Rich Asians, Kevin Kwan’s debut novel, describes the rising über-elite of the ever-powerful Asian world. The novel tell the story of largely hailing from three families (the Youngs, the Shangs, and the T’siens), and the reader is given an intimate window into the spending and investing patterns, and burgeoning and crumbling relationships of this upper echelon of extraordinary wealth. Even if the novel predominately tracks the relationship of one young couple, Rachel Chu and Nicholas Young, its focus is on the new status symbol and values of the cosmopolitan Chinese upper class. There are private jets (equipped with yoga studios), privately owned islands, outlandish resorts, and bible study circles where the women are more passionate about stock tips than biblical verse. An entertaining novel where Kwan provides, as a way of educating the reader, myriad footnotes, which offer translations of Cantonese, Hokkien, and Mandarin words, as well as further explanations of the high-end culture and society. 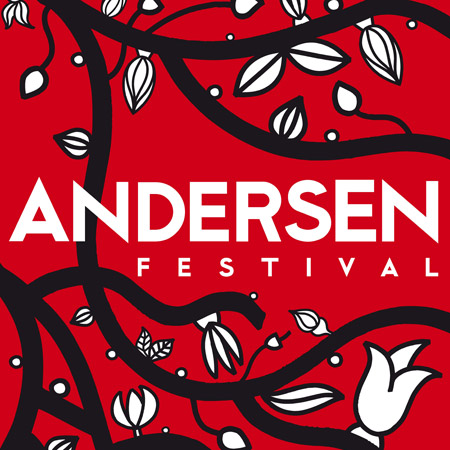 Fairytale Tweets – Sestri Levante – Italy
Saturday, June 8th saw the ceremony of the H. C. Andersen 2013 Awards, organised by the Municipality of Sestri Levante in collaboration with the Secolo XIX newspaper. It was dedicated to the literary genre of fairy tales. In this edition and for the very first time, there was also proclaimed the winner of the Tweet fairytale Award, won by Tiziana Bruno Rosa – teacher and sociologist – for her fairy tale lasting like a tweet: no more than 140 characters. More than 1500 people participated for the selection of the 15 finalists, posted on FB and voted by the community. The communication agency BoccaccioPassoni had this idea. The texts could be written in different languages. The 3 most popular tweets were awarded: in fact, all those who achieved the highest number of “like”. 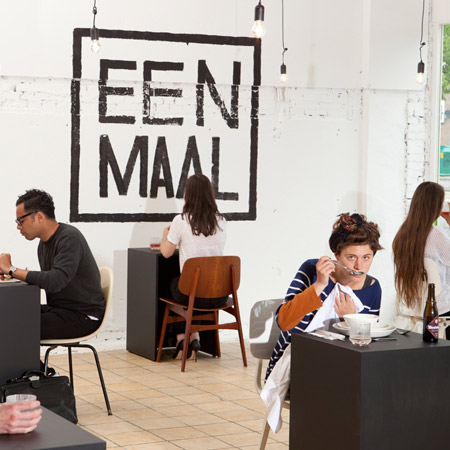 Eenmal restaurant for solo diners – Amsterdam
A pop-up restaurant named Eenmaal (one meal), which only offers tables for solo diners was opened in Amsterdam. “It is the perfect place to dine in pleasant solitude; an exciting experiment for those who never go out for dinner alone and an attractive place to eat for those who already enjoy doing so,” creator Marina van Goor says. The spot, which claims to be the world’s first one-person restaurant, features an arrangement of single-occupancy black table-cubes paired with vintage chairs. Eenmaal – which serves only one four-course vegetarian prix fixe menu – lasted just 478 hours. 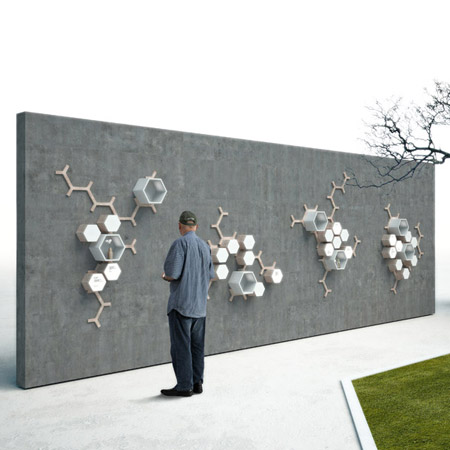 Design For Death Competition Results
Designboom organised a design competition on the theme of death care, in collaboration with the Lien Foundation and ACM Foundation, and supported by the National Funeral Directors Association (NFDA). With the “Design For Death” Competition Designboom invited participants to examine the cultural aspects around death and dying in order to foster openness within the established traditions or systems. In total 2050 submissions were received from 96 countries. France’s Pierre Rivière and Enzo Pascual won the “Eco/Green Deathcare” category, with an entry called “Emergence” where a cemetery is envisaged as a reservoir of life – made from biological concrete that absorbs carbon dioxide and produces electricity. Asta Sadauskaite and Mr. Loucas Papantoniou from Lithuania and Greece respectively, won the “Wrappings of Mortality” category, they impressed the jury with their simple but powerful “Family Tree” – a cluster of honeycomb-shaped urn vaults with OLED covers that serve as a final resting place for families. 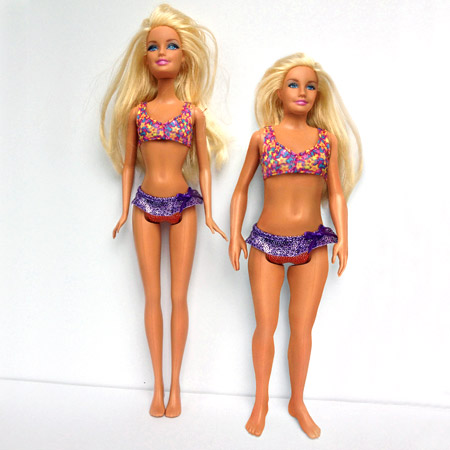 Average Barbie by Nickolay Lamm
How would Barbie look if, instead of having her body proportions that so many have criticised, instead had the body measures of any 19 year old American teenager? The answer is Average Barbie: a reconstruction of Barbie created, thanks to digital technology and 3D printers, by the young artist and researcher Nickolay Lamm, using measurements that match up closely with CDC measurements of the average 19 year old woman in America. “If Barbie looks good as an average woman and even there’s a small chance of Barbie influencing young girls, why can’t we come out with an average sized doll?” Lamm tells TIME. “Average is beautiful.” 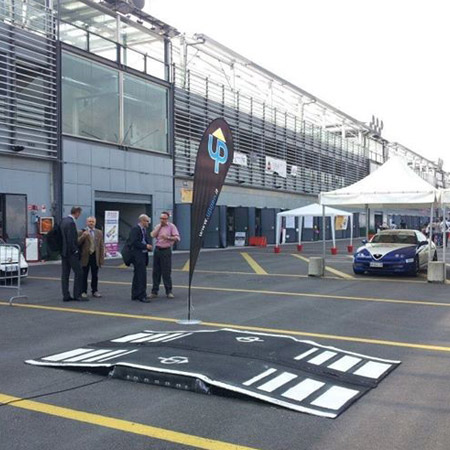 Power Bumps – Italy
An Italian start-up, Underground Power, created Lybra, the first speed bump that channels kinetic energy produced by cars in transit to transform it into alternating electric current for various uses. The project has found a sponsor / partner in Auchan, looking for a device to increase the environmental sustainability of its shopping centers. From their relationship was born the first trial of Lybra, installed, at the end of June 2013, in Auchan shopping centre of Rescaldina (MI). 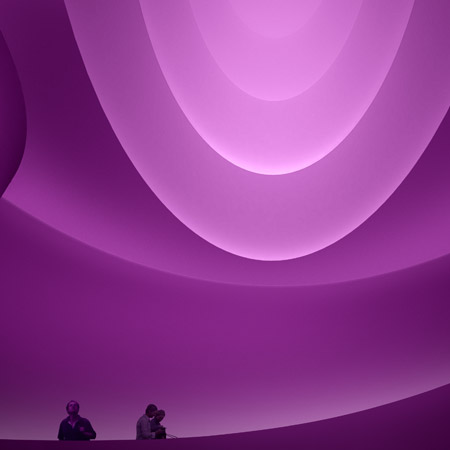 Light artist James Turrell – 3 US exhibits
James Turrell makes light itself the art. “We usually use light to reveal an image,” he says. “I want the light to be the revelation. I want people to treasure light”. The artist, who was one of the leaders of the avant-garde Light and Space movement of the 60s, is now approaching 70 and three museums are recognizing his influence and his work: the LACMA, the Museum of Fine Arts, Houston, and the Guggenheim Museum in New York. Aten Reign, his installation that fills the Guggenheim’s rotunda, artificially recreates our main star’s light, providing power while allowing natural light to be filtered in. It pushes the possible psychological effects of color and challenges viewers to consider how things are seen. 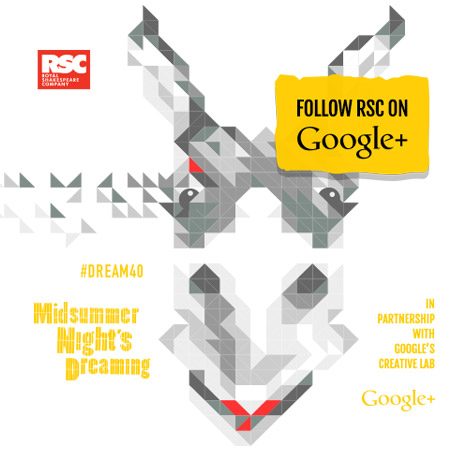 #DREAM40 by RSC and Google+
The Royal Shakespeare Company and Google+ have partnered on an experimental stage production of Midsummer Night’s Dreaming. The project consisted of a three-day, real-time performance of one of Shakespeare’s most popular plays, to coincide with the real course of events narrated by the great British author. The event took place in the RSC’s home of Stratford-upon-Avon and also online at Dream 40. The acting was streamed on-line and viewers were asked to contribute sending images, thoughts, videos and whatever may relate to the thoughts of characters, making Shakespeare’s masterpiece a piece of contemporary daily life. 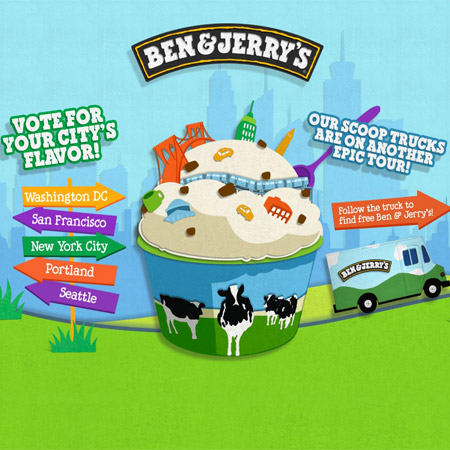 City Churned campaign by Ben & Jerry’s – United States
The City Churned campaign lets fans around the U.S. decide what their city’s ice cream flavour combination will be. Ben & Jerry’s ‘City Churned‘ campaign is letting fans around the U.S. decide what their city’s ice cream flavour will be by crowdsourcing locally inspired flavours. It is kicking off in five markets: Washington, D.C., San Francisco, New York, Portland and Seattle. Each will have its own microsite to track real-time votes from the motions and residents. Over the course of several weeks, Ben & Jerry’s will keep tabs on the activities of each city by means of public transport, tweets, traffic, landmarks, and its people, to create and name the city-inspired Ben & Jerry’s flavours. To ensure that the ‘City Churned’ flavours are a tribute to the cities, Ben & Jerry’s is partnering with local businesses to source the ingredients.