Be Cycle and Fashion – Cannes 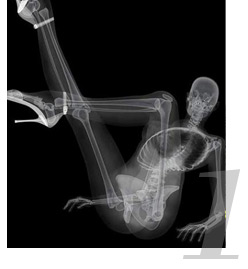 X-ray-rated 2010 calendar – Eizo – Germany
One of the year’s most provocative pinup calendars features pictures that would be X-rated … except that they’re shot using X-rays. The German advertising agency Butter put together an X-ray-rated 2010 calendar to promote Eizo’s high-precision displays for medical imaging. Butter’s blurb notes that pinups are more often found in auto garages than medical offices. “Eizo breaks this taboo,” Butter boasts. “This pinup calendar shows absolutely every detail.” The Eizo X-Ray Pin-Up Calendar is at once hilarious and inventive, a most creative way of promoting their brand to their clientele and beyond it. 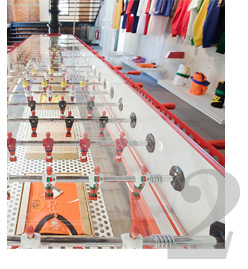 Nike Stadium – Milan
After Berlin, London, New York, Paris and Tokyo, Nike Stadium opened in Milan, in Foro Bonaparte 50, inside Fondazione Antonio Mazzotta. This new space offers to the Italian market the best sportswear and performance items from the American brand, in a unique context which is totally integrated to the other worldwide Nike Stadiums. In addition to the store, is home to an extensive event space, a theatre designed to attend sporting events and an area underground dedicated to concerts and presentations. The protagonist of the selling space is a spectacular and very long table-football where you can even play 11 against 11. You can find all Pinnacle products and many shoes, some of which are only available in Stadium stores, and all presented through product stories. 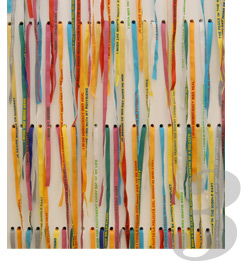 A Day Like Any Other exhibit by Rivane Neuenschwander – New Museum – New York
A Day Like Any Other, the major personal show of Brazilian artist Rivane Neuenschwander at the New Museum (New York) spotlights her unique contribution to the narrative of Brazilian life, revealing her wide-ranging and singular, interdisciplinary practice. Among the installations, I Wish your Wish in New Museum’s lobby gallery space: inspired to the tradition of the faithful silk ribbons, to be tied to people’wrists and to the gates of the church of Nosso Senhor do Bonfim in Salvador, Bahia: the wishes are granted when the ribbons wear away and fall off. For I Wish Your Wish, hundreds of similar ribbons are printed with visitors’ wishes from past projects, and hung from the gallery walls. Visitors are invited to remove a ribbon, tie it to their wrist, and replace it with a new wish written on slip of paper, so continuing the project that keeps regenerating. 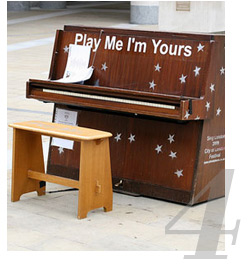 Play Me, I’m Yours – New York
This summer, the non profit organization Sing for Hope takes music to the streets with Play Me, I’m Yours, a public art project that will bring 60 pianos to the parks and public spaces of New York City. From June 21 to July 5, the pianos will be be placed throughout the city’s five boroughs to be played by all who pass by – students, tourists, children, nannies, doctors, merchants, artists – in a festival of music open to all New Yorkers. The British artist Luke Jerram, who has been touring the project since 2008, has called the pianos “almost a Facebook [type] resource. They’re a blank canvas for people to share their creativity with one another.” It’s the musical equivalent of giving everyone a piece of chalk to draw on the sidewalk with. 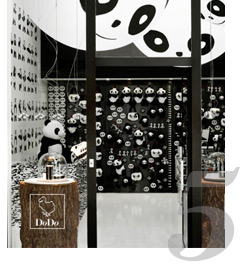 Panda House, temporary shop by Dodo – Milan
Italian jewellery firm Dodo teamed up with designer Paolo Navone and furniture designers Slide to create a panda-themed shop, to celebrate their 15th anniversary. The jewel aims to give you the real panda experience, decorated exclusively with black and white diamonds. There is a counter made from 9000 Lego bricks, while two walls are covered with images of a panda practising t’ai chi. Five enormous light bulbs featuring the face of a smiling panda hang down from the ceiling, completing the theme. The panda unifies Dodo with WWF Italia, the organisation to whom Dodo continually donates part of the proceeds from sales. The temporary shop will be open until the end of the year. La Rinascente store proposes a panda-theme eco-window too. 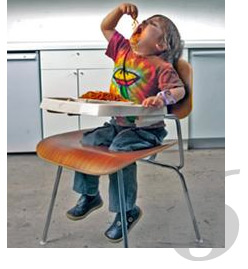 TecnoCRAFT exhibit – Yerba Buena Center for the Arts – San Francisco
TechnoCRAFT: hackers, modders, fabbers, tweakers, and design in the age of individuality, a new design exhibition held at YBCA (Yerba Buena Centre for the Arts), San Francisco, from 6 of July to October 3rd, explores how the boundary between the role of the designer and the consumer is disappearing, a consequence of individuality and the need for customization in the age of mass-production. The show is organized around six subthemes: crowdsourcing, platforms, blueprints, hacks, incompletes, and modules, and is curated by acclaimed industrial designer Yves Behar. Selected works of Enzo Mari, 5.5 Designers, Ronan and Erwan Bouroullec, among others are displayed in the show. 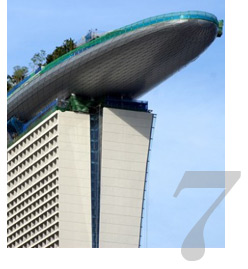 Sands SkyPark – Singapore
Sands SkyPark at Marina Bay Sands in Singapore officially opened on the 24th June 2010 to the Media and VIPs while the public can start going there on June 25th. This uniquely amazing place is situated at the 57th floor of the Marina Bay Sands Integrated Resort and is absolutely one of a kind in the world: 200 meters in the sky, 380 meters of surface standing on top of three skyscrapers, with a 150 meters length swimming pool, a botanic garden and a panoramic bridge. The architect behind the stunning structure is Israeli architect Moshe Safdie who in the past has been behind the Yad Vashem Holocaust Museum in Jerusalem and the United States Institute of Peace headquarters in Washington. 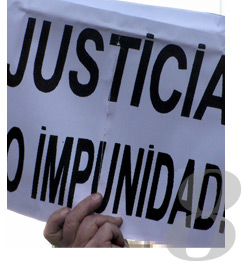 Culture Against Impunity video by Azucena Rodríguez – Spain
“I never had a trial, nor a lawyer or a judgement; my family is still waiting for me. Until when?” This is the ending of each one of the 15 stories of the video Culture Against Impunity by Azucena Rodríguez: 15 stories of Franco’s victims told by 15 actors, film makers, writers – among them Pedro Almodovar, Javier Bardem, Maribel Verdu, Almudena Grandes – which aim is supporting the families of the more than 113.000 people “desaparecidos” during the Spanish Civil War. Each one of the 15 celebrities gives voice to a story speaking in front of the camera, in a claim for justice and for an authentic politic of memory towards all those people that were arbitrarily killed and that are still waiting for reparation from the Spanish democracy. 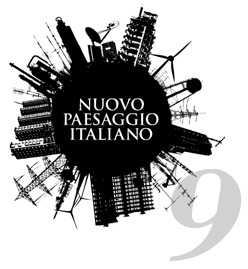 Nuovo paesaggio italiano (New Italian landscape) by Oliviero Toscani – Italy
“The Italian landscape, the one painted by Leonardo, Raphael, Giorgione is raped every day. Churches glass-cement towers that seem to be missile launch ramps, Cambodian pagoda style roofs, designed by party’s sponsored surveyors… ” It’s the complaint of the photographer – advertiser, Oliviero Toscani, who together with Salvatore Settis, Terra Moretti group and FAI launches Nuovo paesaggio italiano (New Italian landascape). a project open to anyone wishing to document with the camera, with the videocam and with phones, the havoc that devastate Italy. The photos must be sent to info@nuovopaesaggioitaliano.it and will be used for a series of exhibitions, a photo contest and, especially, to create a multimedia archive. 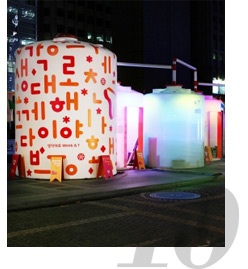 Glowing water tanks by Urbantainer – Seoul – Korea
Korean architecture and design firm Urbantainer has used large water tanks, commonly found around the city, to display artwork by graduating college students. The containers are usually limited to storing water, but were given a new lease of life as exhibition spaces. Installed in Cheong-Gye Square, Seoul, 17 tanks were interconnected by water pipes that doubled as lighting channels. The lights continuously changed, causing the containers to glow brightly from the inside. This inviting spectacle turned the water silos into a new medium for communication.