Broadband a legal right for every citizen – Finland

Ernesto Neto: The Edges of the World – Hayward Gallery – London 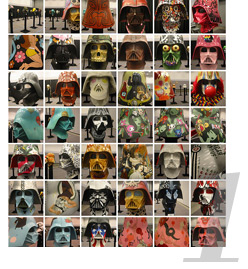 The Vader Project Auction – Philadelphia
The idea behind The Vader Project was simple, 100 of the best underground artists and designers working today including Peter Kuper, Jermaine Rogers, Gary Baseman, Paul Frank, Ron English, Jeff Soto, Michelle Valigura, Frank Kozik, Plasticgod, Simone Legno, Alex Pardee, Suckadelic, Cameron Tiede, Mister Cartoon, Marc Ecko, and Amanda Visell all asked to rethink the iconic black helmet that defined Darth Vader. What started, as a simple idea in 2005 then became a record-setting exhibition in 2009 and now following a final opportunity to view the helmets in person, these unique pieces of art have finally been sold at auction to Collectors and art connoisseurs worldwide. The auction took place on July 10, 2010 at Freeman’s Auction House in Philadelphia, bidding on most of these artistic helmets started at around $1,500 with some selling for as much as $10,000. 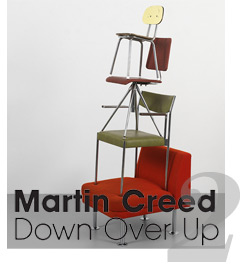 Down Over Up Exhibit by Martin Creed – The Fruitmarket Gallery – Edinburgh
Down Over Up display new and recent work by Martin Creed, one of Britain’s most highly-regarded and popular artists. Creed’s work captures the public imagination, while also attracting critical acclaim for its generous, accessible approach. He puts ideas out in the world in a variety of materials, not all of them art materials yet not all of them everyday stuff either (while he makes work with readily available, simple things such as planks of wood, stacked chairs or pieces of crumpled paper; he also uses paint, a traditional artist’s material, and professionally trained runners and ballet dancers, neither of which are particularly easy to get hold of). The exhibition at The Fruitmarket Gallery focuses on stacking and progression in size, height and tone: stacks of planks, chairs, tables, boxes, pieces of Lego; series of paintings and works making use of the musical scale. Creed talks about these works in terms of a picture of growth, showing process, progress and things in movement. 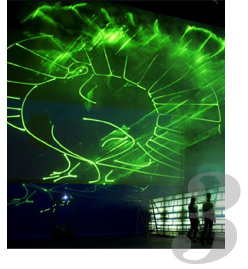 Tomorrow, in a Year – A Darwin electro-opera – Barbican Theatre – London
On July 27/28th the Barbican Theatre in London presents the UK premiere for an acclaimed new work in which the world seen through the eyes of Charles Darwin forms the basis for the performance, blending Hotel Pro Forma’s striking visuals with a score by the Swedish pop-duo The Knife to create a new species of electro-opera. Darwin, time and nature are represented on stage by an opera singer, a pop singer and an actor performing The Knife’s music. Six dancers form the raw material of life. Together with the newest technology in light and sound, our image of the world as a place of incredible variation, similarity and unity is re-discovered. Directed by Ralf Richardt Strøbech and Kirsten Dehlholm, the visual and conceptual universe is formed by Darwin’s thoughts, experiences and letters. The performance is divided into two parts – analogous to the development and publications of The Origin of Species. 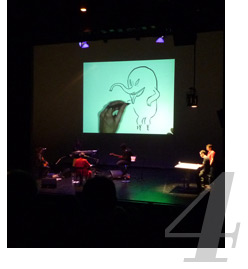 Concert Dessinè by Rudolphe Burger – Avignon Festival
At the Avignon Festival the performance titled Concert Dessiné (Drawn Concert), is the evolution of a similar experience at Angoulême International Comic Book Festival in 2009. Onstage famous designers and cartoonists showcase live a screenplay based on the Rudolph Burger’s sophisticated rock. He is accompanied by the bassist Julien Perraudeau, the drummer Alberto Malo and with Erik Truffaz on trumpet. The music evokes some images created lively, that are visible to everybody on a large screen. The fusion between music and comics creates an eclectic mix of great suggestion: the creativity starts from the ability to translate sounds into images, creating a strong resonance with the audience. Comics and music improvisation on stage. 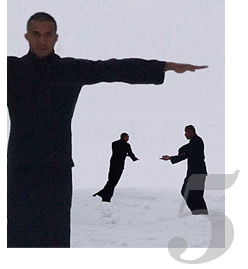 Byrds with Skymirrors by Lemi Ponifaso – Theater der Welt Festival – Essen
Birds with Skymirrors is a haunting and timely work choreographed by Samoan-born, New Zealand based, choreographer Lemi Ponifasio (who has been described in the European press as a possible successor to Pina Bausch and Merce Cunningham). The work receives its world premiere at the Festival Theater der Welt in Essen, and in August will be part of Edinburgh International Festival 2010. The inspiration for the work came while Ponifasio, who realises his work through his company MAU, was working on the Central Pacific attol of Tarawa five years ago. He says: “I encountered an otherwordly sight of transcendental beauty and of apocalyptic dread… For me, Birds with Skymirrors is a question – what is our human role on Earth? I don’t want to preach to anybody, I’m just trying make sense of our relationship with the Earth.” 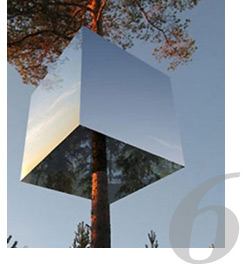 Treehotel opening – Harads – Sweden
On 17 July, in Harads, Sweden, 60 km from the Arctic Circle, there opened the first case of a hotel in a tree, the Treehotel. In this treehouse hotel one can sleep in the tree and choose from six very special living environments integrated in nature, small in size, about 4 × 4 × 4 m, but with all the comforts. The rooms Cabin, Blue Cone, Nest and Mirrorcube include bathroom, kitchen, living room and some, like the Birds Nest, even a sauna. Two more rooms are scheduled for October and the owner’s goal to reach is 24 rooms in the next five years. Five architectural firms have been so far involved. 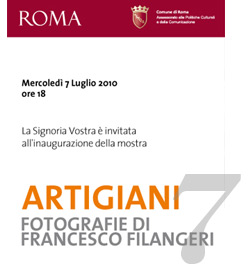 Artigiani exhibit – Photos by Francesco Filangeri – Sala Santa Rita – Rome
An invisible thread connects the face, the hands and the objects of artisans coming from different countries. A thread that represents a common social context where the work is identified with life and product become a direct expression of human creativity. A thread made visible through craftsmen portraits made in Rome, Palermo, London and Paris by the Sicilian photographer Francesco Filangieri, who wants to propose a journey, o sort of reflection on the figure of the artisan and its transnational character. The exhibition will be inaugurated on July 7 in the beautiful setting of Sala Santa Rita Road Mountainous 8 multi-purpose area of the Municipality of Rome and will be open to the public until July 29. 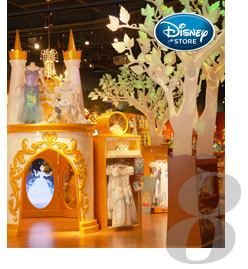 A new concept for Disney Stores
Disney has launched an innovative store format, opening of the first shop worldwide in June, in California near Los Angeles, and in July the opening of the first one in Europe, in Madrid, Spain. These new stores, which in a few years will substitute all the existing Disney shops, offer a complete entertainment experience, through many interactive stations and a real theatre. In a specific department, children can build and personalize the Cars characters, in the shop there are musical interactive trees, switching colours and inhabited by Disney characters, while at the entrance, in the Princess Castle, there’s a “true” magical mirror and with a touch of the magic wand a princess will appear to tell a fairytale. The new Disney Store chain is based on the Apple Store concept and rely on the interactive shopping experience and on entertainment to re-launch the brand world. 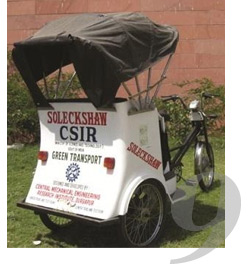 Solar-powered soleckshaw for the Mail service – India
Sachin Pilot, Indian Minister of Post and Telecommunication, launched the solar-powered soleckshaw, an environment-friendly postal delivery vehicle. As a Pilot Project, soleckshaw was introduced in the Project Arrow post offices in a city of Rajasthan. The Ministry will evaluate the performance of the vehicle within a few months and then explore the possibility of its expansion on a larger scale, all over India. Soleckshaw is a solar-power assisted, pedal-operated cycle rickshaw developed by CSIR. It reduces the rickshaw puller’s effort by providing battery assistance. A different version of soleckshaw will be used in New Delhi during next Commonwealth Games in October 2010. 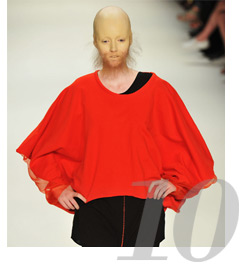 Patrick Mohr at Berlin Fashion Week
German designer Patrick Mohr thought of a unique way of presenting his latest collection for Spring Summer 2011: he put bald and bearded female models on the catwalk, along with male models that looked the same. The show took place during the Berlin Fashion Week and confirmed Mohr’s taste for controversy: in fact, last year he used homeless people together with models to showcase his collection. The reaction of blogs and press has been strong and its choices have been widely criticized as too “weird, odd and downright scary”.