One & Other by Antony Gormley – Fourth Plinth – London 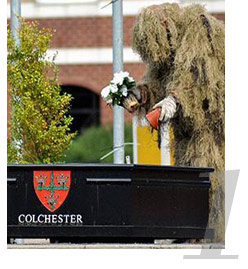 The Human Shrub – Colchester – United Kingdom
The Human Shrub is on a mission to get Colchester blooming again, by rooting out evil weeds and replacing them with flowers. And just like Batman, Superman and Spiderman, he has a secret identity, unique costume and an arch enemy to do battle with. The Shrub, whose real name has not been revealed, first stepped in to deal with the town’s gardening grief after the local council announced plans to get rid of rose beds to save money. When he spotted overgrown planter tubs around Colchester and realised there was more work for him to do in bringing back blooms to the town. Under the cover of his shrub costume, he removed weeds and replaced them with colourful flowers. 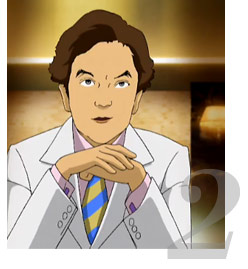 Animated political ads – Japan
An animated political ad for the ruling Liberal Democratic Party (LDP) of Japan has received over 219,000 hits in the first week since the party posted the video on YouTube. The “Propose” ad features a man, who looks similar to Yukio Hatoyama of the opposition Democratic Party of Japan (DPJ), as he attempts to convince a woman in a restaurant to choose him with campaign promises. Prime Minister Taro Aso, a self-professed manga fan, has called for parliamentary elections as members of his own party have called for his resignation amid sagging approval ratings. It’s the first time that an anime is specifically done on behest of political party to criticize opponent. 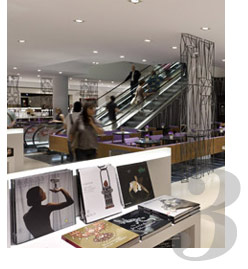 Design Supermarket – La Rinascente – Milan
The Design Supermarket a space dedicated to design inside La Rinascente in Milan, on the underground floor has been opened. It has been realized like a large square by the Silvestrin and Salmaso’s architecture study 1+1, and it offers a large selection of products for the table, office, travel, decoration, lighting by famous designers. The layout is essential, with long white tables on which objects are placed as in an exhibition, that especially enhances the variety of products. It is proposed as a point of sale for a “democratic” design which is inspired by Northern European design. In fact, there’re many Nordic brands whose philosophy combines good design with affordable prices. A unique space in Milan. 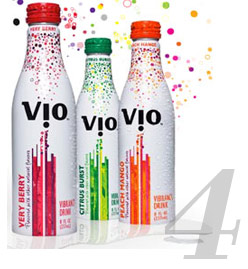 Vio – Fizzy Milk – New York
Going under the name Vio, Coca-Cola has begun test-marketing the carbonated drink at natural food stores and delis in New York. It sells for about $2.50 a bottle, no chilling required. One of Coke’s copywriters claims it tastes “like a birthday party for a polar bear.” The drink contains skimmed milk mixed with sparkling water, flavored with fruit and sweetened with cane sugar It comes in four “natural” flavors – peach mango, berry, citrus and tropical colada – and could even be marketed as a healthy nutritional drink. The drink is part of a wider Coke initiative called Project Life to develop milk-based products. If it is a success in the United States it could be launched globally. 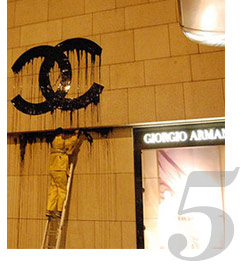 Liquidated Logos exhibition by ZEVS – Hong Kong
ZEVS’ “Liquidated Logos” exhibition at the Art Statements Gallery in Hong Kong (from 16 July to 30 September) brings an updated look at his work, critical vision and direct impact on urban surroundings. The French graffiti artist, known for “flipping the script” on world renowned brands such as Coca-Cola and Chanel, broadened his scope to include fashion icon Louis Vuitton. Using his trademark technique of liquidation. While preparing for his first ever solo show in Hong Kong, authorities arrested ZEVS (who really reconfirmed himself as a notorious logo destroyer) after he painted a “liquidated” Chanel logo atop the flagship Giorgio Armani store to “reflect the war of brands”. 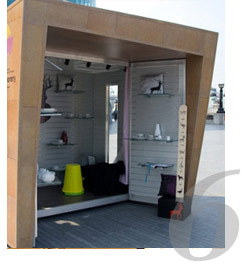 KioskKiosk – London
KiosKiosK is an innovative ‘pop up shop’ that will provide free temporary retail space for start-up businesses in central London this summer. The first KiosKiosK – designed by Wayne Hemingway and supported by the Mayor of London and the London Sustainable Development Commission’s London Leaders programme – will be housed for two months (July to September 2009) outside London’s iconic City Hall. It will offer rent-free space for people with creative products to sell such as ceramics, artworks, creative gifts and fashion, helping new businesses with great ideas to get a step- up on the ladder to success. 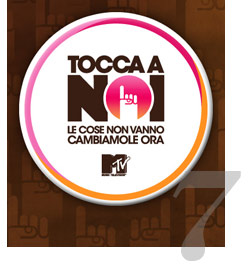 The law on the future of University by MTV Italia’s “Tocca a noi”
The 20th of July 2009 MTV Italia submitted to the Italian Government a proposal for a new law on the future of university. For the first time in Italian history, young people are directly trying to define a law meant for them. The law was the result of “Tocca a noi” (“It’s our turn”), a series of initiatives and events aimed to ask the Italian teen-agers to ask the politicians to change things. The law was written with the help of the students and researchers of the Faculty of Law of the Bologna University. More than 300.000 web users chose the theme “School and University”, then the law was written in 3 versions, voted again by more than 1.300.000 people on www.mtv.it. In the organizing committee, which concretely delivered the legislation, there were students of the Spisa School from Bologna University, many musicians and artists who supported the initiative and representatives of MTV Italia. 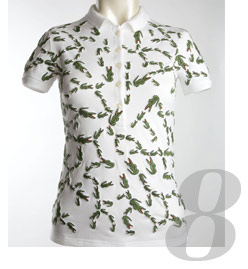 Fernando and Humberto Campana for Lacoste
Brazilian brothers Fernando and Humberto Campana have been asked by the French brand Lacoste to reinterpret their signature crocodile for a series of limited edition shirts. Anavilhanas, small fluvial islands on the Amazon, inspired a limited edition of 125 pieces for men, while Lianas vines that grow in trees in the tropical rainforests inspired a limited edition of 125 pieces for women. Finally, the super limited edition will be made to order only with up to 12 men’s and 12 women’s pieces, and it is hand-crafted completely from crocodile logos, recalling the lace work of Northern Brazil. Both the limited and super limited editions are produced exclusively in cooperation with Coopa-Roca, a socially responsible sustainable development organization based in the Rocinha favela of Rio de Janeiro. 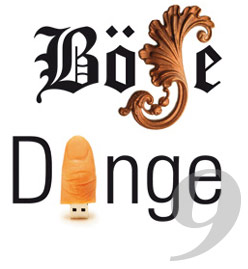 Böse Dinge (Evil Things) – Museum of Things – Berlin
Back in 1909, art historian Gustav E. Pazaurek created his “Cabinet of Bad Taste” in the Stuttgart state crafts museum, in order to demonstrate the great influence of things on people, both aesthetically and morally. Throwing some light on the evil nature of the objects is also the objective of the Museum der Dinge (museum of things) in Berlin, and the present exhibition is an attempt to reconstruct Pazaurek’s exhibition. More than 50 objects on loan from the original collection are exhibited, and these historic objects are juxtaposed with a selection of contemporary products, from mass commodities to designer objects in order to increase awareness and highlight the “crimes” of today’s objects. 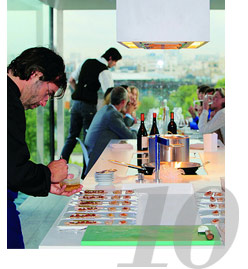 Art Home by Electrolux – Palais de Tokyo – Paris
Art Home is a unique new culinary journey that takes people to the heights of Paris, and beyond. This exceptional concept, brought to life by Electrolux and the Palais de Tokyo, is a story of multiple artists with a common ambition to create unforgettable experiences around food. The formula is a 12-person food experience, a one-table restaurant, which allows diners to host their own dinner parties or food workshops in an ultra-contemporary architectural setting perched on the roof of the Palais de Tokyo, offering a breathtaking panoramic view of Paris. Bookings for the experience, which is expected to run for 12 months, will be taken through art-home-electrolux.com and auctioned through Ebay.