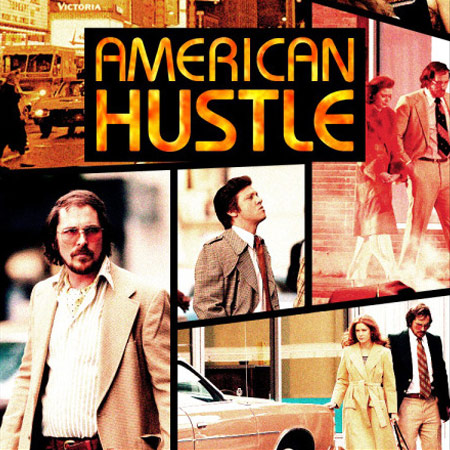 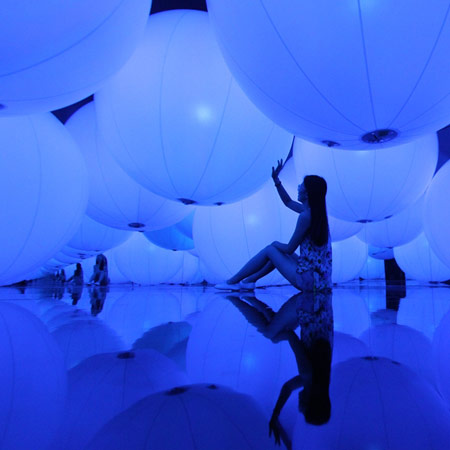 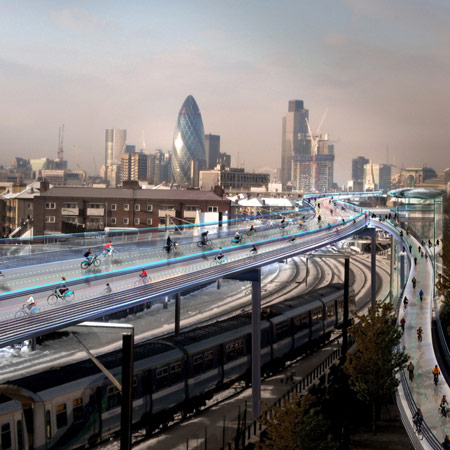 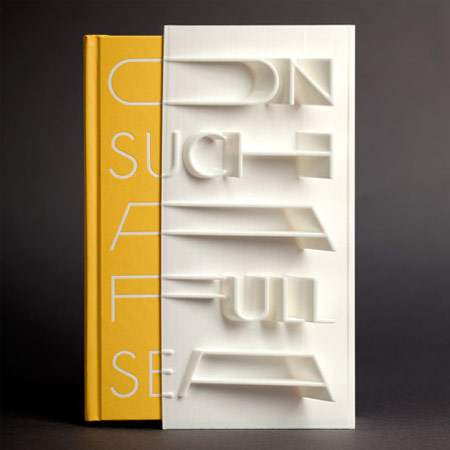 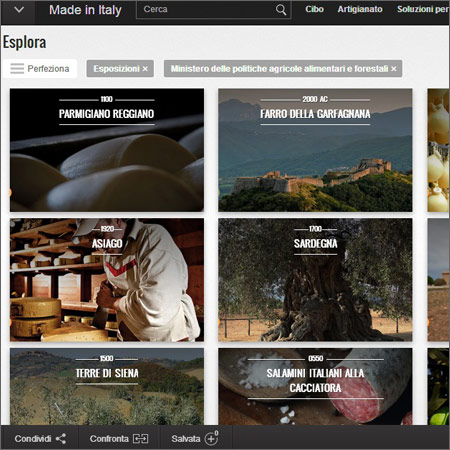 Google Made in Italy 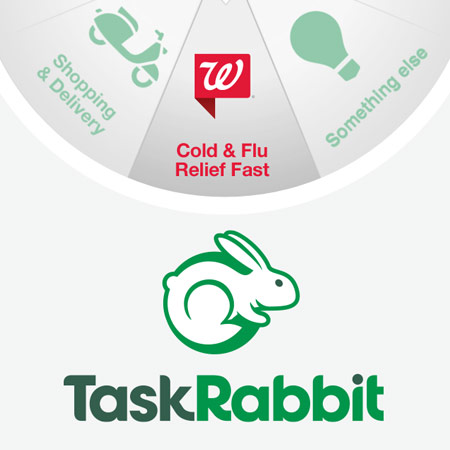 Home delivery of medicine – Walgreens & TaskRabbit – United States
For a six-week campaign during the height of cold and flu season (Jan.7-Feb. 18), drug store chain Walgreens is teaming up with TaskRabbit – the San Francisco-based company that runs a mobile marketplace for outsourcing errands and project work – to enable housebound cold and flu sufferers to get Walgreens medicines delivered to their homes, anywhere within the 19 cities (USA) in which the service operates, by using TaskRabbit’s mobile app. The delivery service isn’t free. After selecting the Walgreens store and products they want, users enter a bid for TaskRabbit delivery. This is the first retailer “in-app integration” for TaskRabbit and will be featured in TaskRabbit’s iOS app’s Task Wheel and on their website. 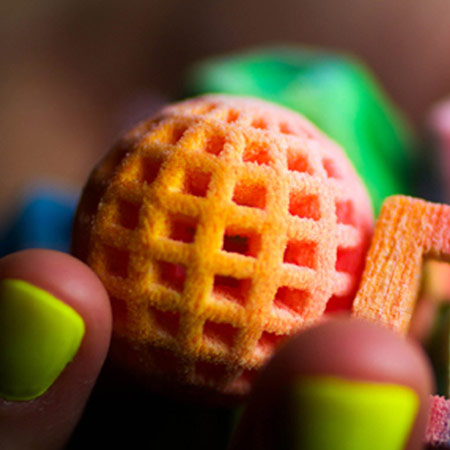 Chefjet printers by 3D Systems – CES 2014 – Las Vegas
Two food-creating 3D printers have been unveiled by 3D Systems at CES in Las Vegas. The machines make chocolate and sugar-based confectionery shaped in ways that would be difficult to produce using traditional methods. The smaller one, Chefjet, is limited to monochrome creations, but the larger Chefjet Pro can create multicoloured objects. Both models can print using chocolate, or sugar infused with vanilla, mint, sour apple, cherry and watermelon flavours. The larger one has the advantage of being able to create “photographic-quality” pictures by mixing together different ingredients that can then then be wrapped around cakes and other surfaces. The designs are built using a layer-by-layer printing process. Sweets are created by spreading a fine layer of the flavoured sugar, and then painting water on top using a jet print head to turn the substance into hardened crystals. 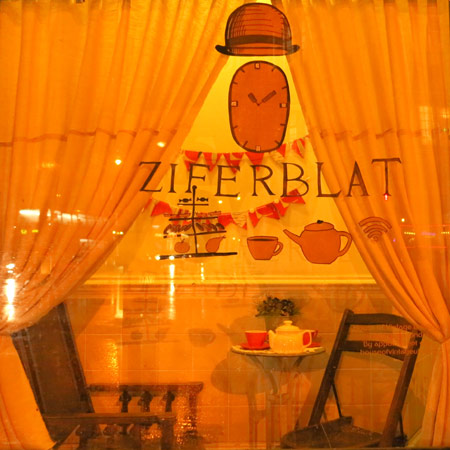 Ziferblat, pay-per-minute-cafe – London
A cafe where the food and drink is free sounds too good to be true. But it exists – in the form of, the UK’s first ever pay-as-you-go cafe in London. At the Ziferblat venue in Old Street “everything is free, except the time you spend there”. Customers pay 3p per minute – or £1.80 an hour – for unlimited food, coffee and wi-fi. Owner Ivan Meetin, 29, said: “Five days ago we had 20 customers and today we’ve already had a hundred, and we’ve even had to turn people away because we’ve run out of seats… there are customers who have been back 10 times already and they bring their friends with them.” This unusual pricing strategy has proven popular in Russia, where nine outlets have opened in the last two years, attracting a total of 30,000 customers a month. 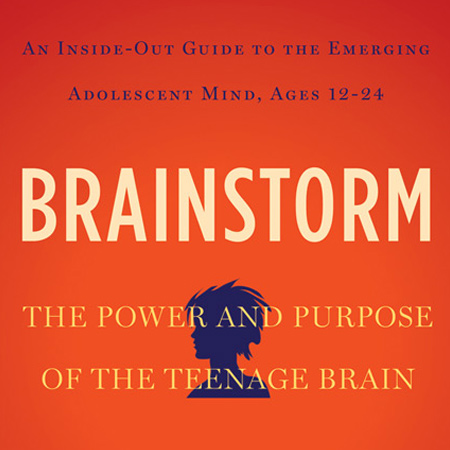 Brainstorm by Daniel J. Siegel
Between the ages of 12 and 24, the brain changes in important and often maddening ways. It’s no wonder that many parents approach their child’s adolescence with fear and trepidation. According to the renowned neuropsychiatrist Daniel Siegel’s bestseller Brainstorm, if parents and teens can work together to form a deeper understanding of the brain science behind all the tumult, they will be able to turn conflict into connection and form a deeper understanding of one another. In Brainstorm, Siegel illuminates how brain development impacts teenagers’ behavior and relationships. Drawing on important new research in the field of interpersonal neurobiology, he explores exciting ways in which understanding how the teenage brain functions can help parents make what is in fact an incredibly positive period of growth, change, and experimentation in their children’s lives less lonely and distressing on both sides of the generational divide. 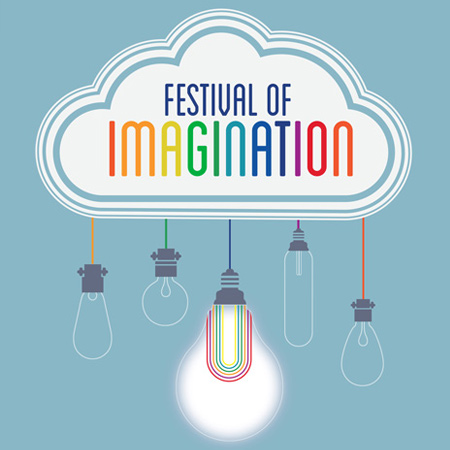 Festival of Imagination- Selfridges – London
As part of the Festival of Imagination taking place during the first month of the year at Selfridges, several events, future-gazing concepts and innovative products were presented to explore the power, the nature and positive impact of imagination. One of the installations was Monolith: immersive virtual world by Gareth Pugh, where visitors entering into a chamber and wearing a black helmet could take a unique and immersive journey through monochromatic city landscapes inspired by the silhouettes of Pugh’s menswear collection. At the basement was Imaginarium, a modern-day auditorium designed by Rem Koolhass from OMA, a combination of polycarbonate walls, mirrors and an Op Art-Style floor. Finally, the pop-up Imagine shop curated by Marcus Fairs was presented as an attempt to visualize products, services and retail we might have in the future, featuring 3D printer technology and augmented reality. 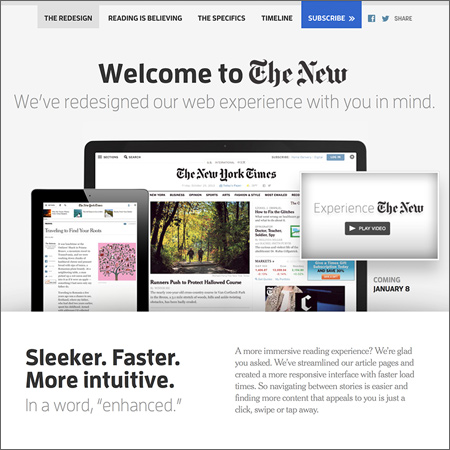 NYTimes.com re-design – United States
On January 7th, The New York Times launched its biggest website redesign in years, but there was no drastic changes. The redesigned site features a series of deep technical changes that will transform the user experience, particularly on mobile devices, but are not readily apparent, in continuity with the previous designs. In fact, the site has been changed to feel more like the paper edition of the New York Times than NYTimes.com. “Rebuilding the entire backend of a website that is as successful and as large as ours is, it’s kind of like changing the engine while you’re flying a plane, so we wanted to do that very carefully,” said Denise Warren, executive vice president of digital products. The renewed site includes a new analytics program meant to generate more data, giving the company much more information about its readers. The enhancements will also impact the business side, thanks to the growth of video ads, considered to be very lucrative. NYTimes.com receives about 1.6 million unique viewers per day while the daily newspaper circulation is closer to 731,000. 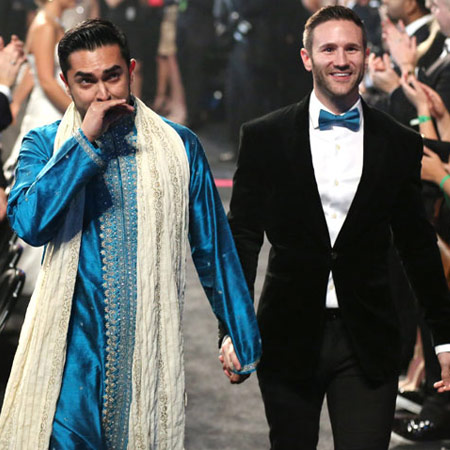 Grammy 2014 Mass Marriage – United States
A mass wedding has become the most talked about moment of the 2014 Grammy Awards, where the marriage ceremony involved 33 heterosexual and homosexual couples. It took place just after the song “Same Love” sung by Macklemore & Ryan Lewis on stage. The text of “Same Love”, a song recorded during the campaign for the adoption of egalitarian marriage law in Washington state, speaks of the rights of gays and gay couples and on the cover of the single appears the Macklemore’s uncle with his companion. Queen Latifah conducted the Grammy’s marriage ceremony. Immediately after the stage has risen Madonna sang “Open Your Heart”. The show, broadcast live, was seen by millions of people in the U.S., where in recent years the issue is much debated, and 17 states plus the District of Columbia have decided to grant marriage licenses to couples composed of persons of the same sex. 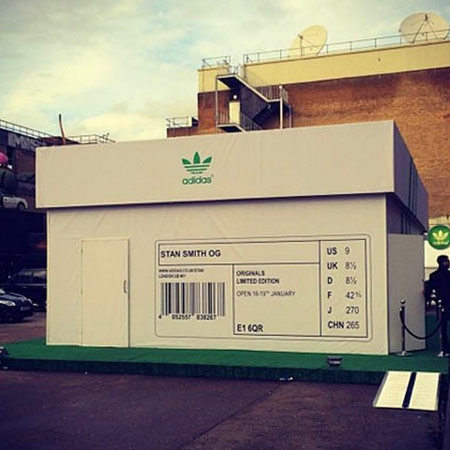 Pop-up store for the 50th anniversary of the Adidas Stan Smith – London
To celebrate the 50th anniversary of the legendary model Stan Smith, Adidas has opened a pop-up store in London. A magnificent scale reproduction of the shoebox, settled in East London, welcomed the fans, collectors and the curious, who in addition to being able to buy limited edition shoes, were able to take part in an interactive experience through the use of 3D printing. The Printers 3D Systems Cube, in fact, have given customers the ability to customize their Stan Smith and trialling the app just launched by Adidas “Stan yourself,” which allows users to put your own picture and its signature in place of those of the legendary tennis player and the company logo. 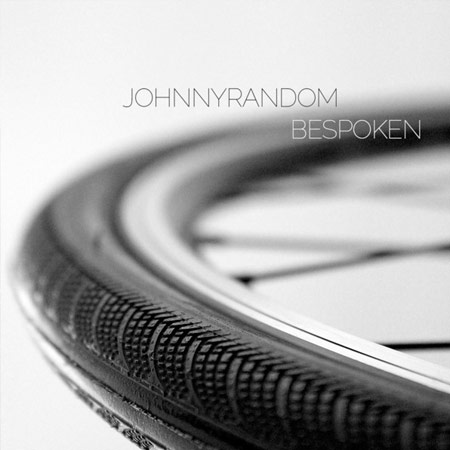 Bespoken by Johnnyrandom
Transform everyday objects into musical instruments. This is the mission of Johnnyrandom, an American artist who calls himself sound composer and music designer. Bespoken is his first single, a cutting-edge song entirely made by using only the bicycle’s components. Bespoken, available for purchase on iTunes, is presented with a video that highlights the creative process of this amazing and unique composition. Johnnyrandom also has a series of previews and sounds from the track available on SoundCloud. 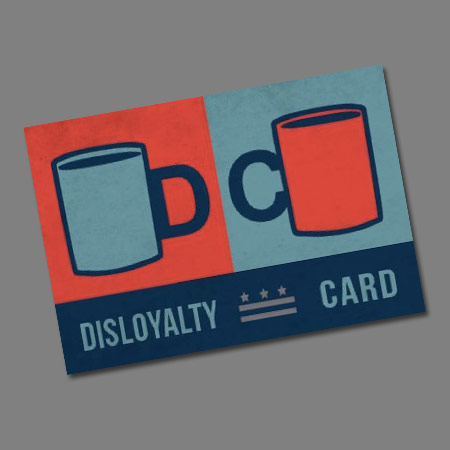 Disloyalty card – United States
A half-dozen independent coffee shops in Washington D.C. have banded together to lure consumers away from Starbucks by releasing a ‘disloyalty card’ that encourages people to buy their coffee cup elsewhere. Purchasers of a DC Disloyal card are invited to visit all six participating shops (Peregrine Espresso, Filter, The Coffee Bar, Chinatown Coffee Company, La Mano and the Blind Dog Café) as part of a ‘coffee adventure’, and collect stamps on the card. Once the card-holder has six stamps, they get a free beverage from any of the shops and can take part in several free initiatives. It is not the first time that independent coffee shops have challenged the Starbucks supremacy. In December, a Dallas cafe started accepting Starbucks gift cards to raise awareness.