A woman after Bush? – USA 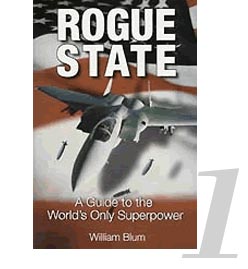 Bin Laden boosts anti-Bush book
Twenty-four hours after Osama bin Laden told the world that the American people should read the work of a little-known Washington historian, William Blum was still adjusting.
Blum, who at 72 is accustomed to laboring in relative left-wing obscurity, checked his emotions and pronounced himself shocked and, well, pleased. “This is almost as good as being an Oprah book,” he said yesterday between telephone calls from the world media and bites of a bagel. “I’m glad.” Overnight, his 2000 work, Rogue State: A Guide to the World’s Only Superpower, had become an Osama book. By last night, “Rogue State” shot up from 205,763 to 26 on Amazon.com’s index of the most-ordered books. 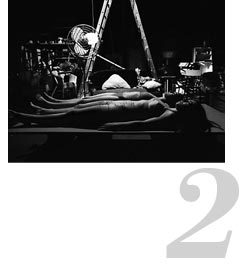 Metamorfosis – La Fura dels Baus, Spain
The Catalan group La Fura dels Baus, popular for their transgressive theatrical performances, presents its last production, Metamorfosis, taken from the famous Kafka’s novel, that has been held at the mid of January in the Palma de Mallorca’s Auditorium and that will be presented in Italy (Milan and Rome) starting from the next month of March. The show marks a relevant change for the group that embraces a very much more traditional conception of theatre. Engaged in a constant evolutionary process, La Fura dels Baus have always surprised their public and critics since the beginning of their activity in 1979 with complicated shows full of artificial technical gears: music, images, mouvement, and physical performances combined with loads of technology. Even if technology is still present, they have decided in Metamorfosis to make a shift from technology coming back to the words, convinced as they are that words are nowadays the most powerful tool in order to express emotions and the internal world. The Kafka’s Metamorfosis therefore becomes the way to describe the anxious soul of the modern man and his fear for loneliness. 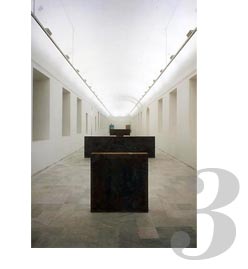 Big sculpture by Richard Serra missing, Madrid
Richard Serra is an American sculptor who creates large-scale minimalist works in metal, concrete, fiberglass, and other materials, usually intended for specific outdoor sites. His pieces are included in many major museum collections. The Reina Sofia Museum in Madrid announced that has lost the 38-ton steel sculpture commissioned to the artist, acquired in the late 80’s later for about $220,000. The museum, one of the city’s most popular, exhibited the work for few years. Since 1990 the sculpture was placed in a warehouse with a company that specialized in storing large-scale artworks. The loss of the huge solid metal sculpture was discovered when Ana Martinez de Aguilar, the museum’s director, decided a few months ago to display the sculpture again. 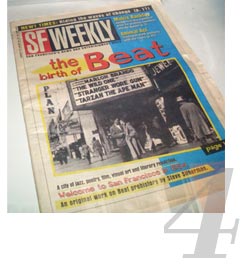 Beat Museum – San Francisco, USA
Nearly half a century after they flourished in North Beach, the Beats are back in San Francisco. The Beat Museum dedicated to the beat generation opened in Grant Avenue on the 13th of January with an opening event in which was involved Carolyn Cassady, the widow of Neal Cassady, whose travels with Kerouac were the inspiration for the beat icon On the road. In the museum can be found manuscripts, letters and a copy of Ginsberg’s poem Howl, whose reading at Six Gallery (not far from Grant Avenue) in 1955 marked the beginning of the Beat movement. 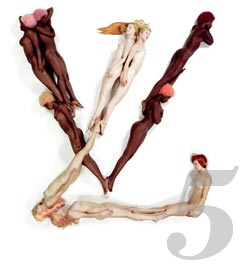 Alphabet Concept by Vanessa Beecroft, Paris
The recently opened Louis Vuitton store in Paris, inaugurates this month the Espace, an area dedicated to contemporary art and culture, with the exhibition Alphabet Concept by the italo- american artist Vanessa Beecroft. Beetween performance and documentary work, the exhibition presents photos and videos of female nudes composing the alphabeth letters. One ot the work interpretets the Louis Vuitton initials through fascinating black and white silhouettes. Espace Louis Vuitton is a gallery of 400 mq surface under a cupole at the 7th floor of the emporium. Even the lifts up to the exhibition space are a work of art: “sensory deprivation lifts” by the artist Olafur Eliasson. 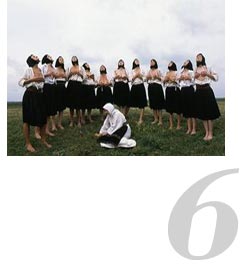 Balkan Epic by Marina Abramovic, Milano
The 2006 season of Hangar Bicocca in Milan started with Balkan Epic, the new exhibition by Marina Abramovic. The exhibition was thought and organised for a space which is considered one of the biggest attractive for contemporary art in town. The curator is Adelina von Fürstenberg. For 3 months, up to the 23rd of April, the exhibition is located in a display made up of megascreens set in the breathtaking naves of the former industrial hangar of Viale Sarca. Marina Abramovic’ is considered among the most influential names in today’s art: the visitors will have the chance to admire her new work Balkan Erotic Epic and other 6 video installations created between 2001 and 2003. 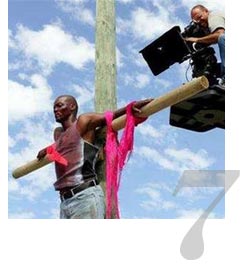 Son of Man by Mark Dornford-May
Billed as the world’s first black Jesus movie, Son of Man portrays Christ as a modern African revolutionary and aims to shatter the Western image of a placid savoir with fair hair and blue eyes. The South African film, which premieres at Sundance festival, transports the life and death of Christ from first century Palestine to a contemporary African state racked by war and poverty. Gun-wielding authorities fear his message of equality. “We wanted to look at the gospels as if they were written by spindoctors and to strip that away and look at the truth,” director Mark Dornford-May told. 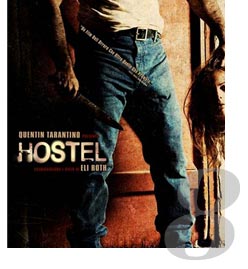 Hostel by Eli Roth
Written & Directed by Eli Roth, presented by Quentin Tarantino, Hostel is a mixture of many of the most terrifying things about human nature and the world at large, culled from many impossible-but-true stories of human trafficking, international organized crime, and sex tourism. Relentlessly graphic and deeply disturbing, the film is sure to shock even the most hardcore horror genre fans. Hostel tells the story of two American college buddies Paxton and Josh who backpack through Europe eager to make hazy travel memories with new friend Oli, an Icelander they’ve met along the way. Paxton, Josh, and Oli are eventually lured by a fellow traveller to what’s described as a nirvana for American backpackers – a particular hostel in an out-of-the-way Slovakian town stocked with Eastern European women as desperate as they are gorgeous. The two friends arrive and soon easily pair off with exotic beauties Natalya and Svetlana. In fact, too easily… Initially distracted by the good time they’re having, the two friends quickly find themselves trapped in an increasingly sinister situation that they will discover is as wide and as deep as the darkest, sickest recess of human nature itself – if they survive. 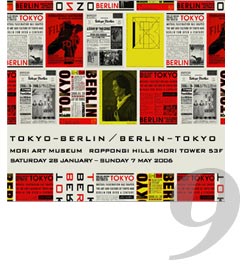 Tokyo-Berlin/Berlin–Tokyo exhibition, Tokyo
The exhibition Tokyo-Berlin/Berlin-Tokyo (Mori Art Museum, 28/1-7/5/2006) traces the fascinating cultural links between these two great world capitals from the end of the nineteenth century until the present day. Through two world wars, a devastating earthquake, high-speed economic growth, failed ideologies, and economic recessions, both cities experienced similar periods of ruin and rebirth. Cultural contact between the two capitals at these times was not limited to art, but included numerous fascinating exchanges in such fields as architecture, photography, theatre and design. This exhibit reflects the varied interaction and traces their history in a total of some 500 works divided into 11 sections. The first half of the exhibition showcases the influences of Tokyo’s artistic community in the early twentieth century, and highlights the relationship between Bauhaus and Japanese architecture and design. The second half focuses more on the parallel relationships between the two cities and their artistic movements. 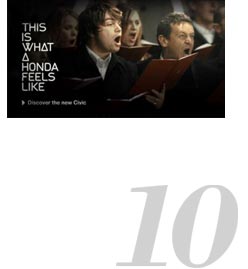 Honda Civic Choir commercial, UK
Eschewing the usual source for sound effects, Wieden+Kennedy London has created a two minute commercial for Honda UK and used a choir of humans to generate all the sounds in an ad for the new Honda Civic. The ad is absolutely not computer generated. It took 5 months and 606 takes to get it right. The full advertisement was released on British televisions on January the 13th. A microsite accompanies the ad which features a 3D-ish model of the car that people can view from different angles, a “making of” video and a service where visitors can sign up for a test drive. The 120 second TV ad and the “making of” has been made available as videocasts to be played at home and in the office on computers or video iPods.