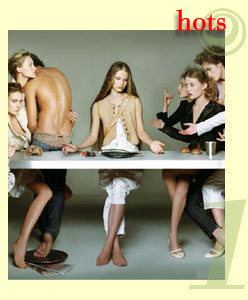 The Last Supper banned, Milan
Authorities in Milan, Italy, have banned a billboard featuring an all-female version of Leonardo Da Vinci’s Last Supper. The poster, by French fashion house Marithé and François Girbaud, is a version of Leonardo da Vinci’s work with an almost all-female cast. The poster has appeared on billboards and in magazines in New York and Paris for weeks, but in Milan, where Leonardo da Vinci’s original fresco and religious sensitivities carry more political weight, it was banned. The city’s advertising watchdog ruled in January that the image “with a high concentration of theological symbols, cannot be recreated and parodied for commercial ends without offending the religious sensitivities of at least part of the population.” 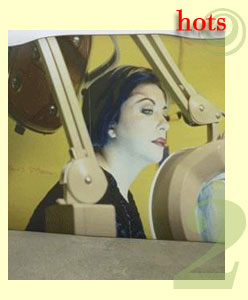 Pièce lumineuse by Orlan and Philippe Chiambaretta, Palais de Tokyo Paris
Pièce lumineuse is an installation coming from the collaboration between the artist Orlan and the architect Philippe Chiambaretta. This opera gives a new shape to surgical performances that Orlan applies to herself since the ’90. “Pièce lumineuse”, at the Palais de Tokyo, is another step along this artistic path. Changeable space, white light and spectacular photos from 1993 surgical operations, all remind surgical rooms asepthicity and unreal apect of these acts. A flexible and translucid material was used to match the architect’s fluidity preference with Orlan’s body artistic deformation. 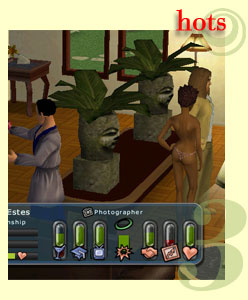 Playboy: The Mansion
Playboy: The Mansion is the new videogme released by Hugh Hefner’s soft core empire. This game blends state-of-the-art social simulation with traditional role-playing and empire-building gameplay. As Hef, the player builds the Playboy Mansion and magazine into dynamic cultural icons and powerful brand. The player can grow famous and gain exclusive access to the Playboy Archives, including footage of the real Playboy Mansion. 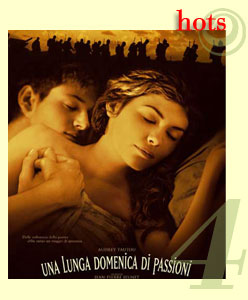 A Very Long Engagement by Jean-Pierre Jeunet
From the director of “Amelie” (Jean-Pierre Jeunet) comes a love story, based on the acclaimed novel by Sebastien Japrisot. The film is set in France near the end of World War I in the deadly trenches of the Somme, in the gilded Parisian halls of power, and in the modest home of an indomitable provincial girl. It tells the story of this young woman’s relentless, moving and sometimes comic search for her fiancée, who has disappeared. What follows is an investigation into the arbitrary nature of secrecy, the absurdity of war, and the enduring passion, intuition and tenacity of the human heart. 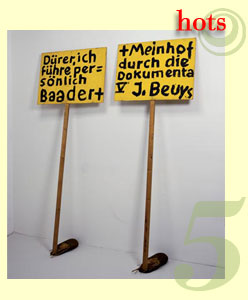 RAF: The Myth, Berlin
The exhibition, RAF: The Myth, at the Kunst Werke Institute for Contemporary Art in eastern Berlin, inspired by the radical leftist Red Army Faction, has raised debate since the first day it opened its doors to the public. Critics accuse the organisers of glorifying the guerrilla group RAF, known for its violent attacks in the 1970s and ’80s, while curators and artists, defend the show that features around 100 works by 54 artists from Germany and abroad. The majority of the artworks, focus on the images of the terrorists, such as the “Mona Meinhof ” painting, work of young artist, Scott King that depicts terrorist Meinhof instead of Mona Lisa. 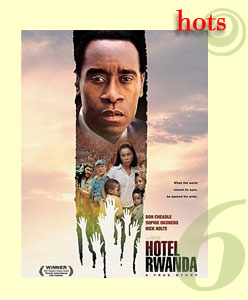 Hotel Rwanda by Terry George
Hotel Rwanda is a wrenching political thriller based on fact, that performs the valuable service of lending a human face to an upheaval so savage it seemed beyond the realm of imagination when news of it filtered into the West. The story is based on the real-life experiences of Paul Rusesabagina (Don Cheadle), the soft-spoken Hutu manager of the Hotel Des Mille Collines, in Kigali, who with his Tutsi wife, Tatiana (Sophie Okonedo), and children, narrowly escapes death several times. Mr. Rusesabagina was directly responsible for saving the lives of more than 1,268 Tutsis and Hutu moderates by sheltering them in the hotel and bribing the Hutu military to spare them. 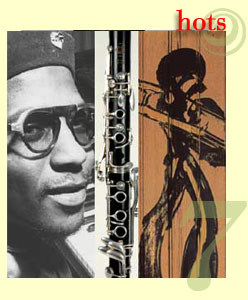 Jazz Auction, New York
Manhattan celebrates the greatest names of the American jazz music through the most entertaining auction of instruments for collection ever conducted before. The event is more than a traditional auction as it is projected and designed as a museum, a place in which people can see and touch the originals artefacts that have marked the history of American music and its people: Louis Armstrong, John Coltrane, Ella Fitzgerald, Peggy Lee, Gerry Mulligan, and the drawings and portrays of Miles Davis, Franz Kline and other fathers of jazz. A tribute that interests not only the fans of the jazz music but the general public. For the modest price of one million dollar it is also possible to buy a Charlie Parker’s saxophone, with even his name sculptured on it. 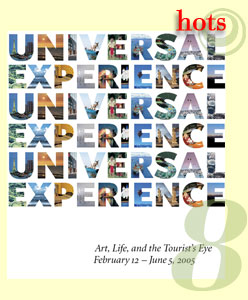 Universal Experience: Art, Life, and the Tourist’s Eye, Chicago
The Museum of Contemporary Art of Chicago is celebrating Tourism with a great exhibition, where the main contemporary visual artists offer their special point of view on travelling experience. As international protagonists of the artistic scene, these seventy characters propose their ironic and provocative works on the phenomenon that has changed so much our society, most of all from the second half of 20th century, bringing people in contact with places, cultures and life styles different from their own. Collateral events and seminars about issues related to tourism such as architecture, history, souvenirs, and anthropology will enrich the exhibition. 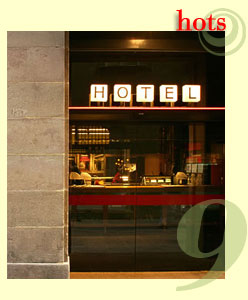 Casa Camper, Barcelona
A fine old stone building that’s recently been restored in one of the coolest areas of Barcelona hosts Casa Camper, the new born creation of the imaginative Spanish shoes producer. Located in the middle of the cool Raval district, entwined in narrow lanes, with trendy shops and an ancient market, the recently opened new hotel has 25 rooms in total, five of which are suites, each of one embodies the Camper ethic: basic stylish furniture, a bit of colour, basically red, white and green and friendly people in charge of the service. The hotel is nicely understated, and you get some good extras included in the price – from 175 to 245 euros -: there are bikes on which to tour the city, a pillow menu and free snacks. a roof terrace on the top of the building with a great view over town. Every room has a balcony, hammocks, plasma screen and wifi connection. The overall philosophy of the project is to respect the social environment, rehabilitating a new building rather than constructing a new one and using renewable energy. 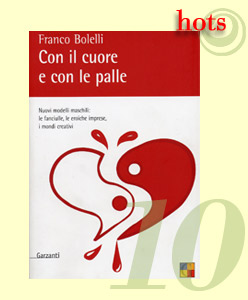 Con il cuore e con le palle by Franco Bolelli
Without balls: this is the sentence without appeal with which women and girls liquidate many men today, even sensitive, nice, cultured but too much subjected to the actual politically correct. The book Con il cuore e con le palle figures one new possible male identity, to rediscover the biological essence and the creative force and, at the same time, to face the challenges of our time. Franco Bolelli, in fact, says that there is not male without the sense of the enterprise, but the sense of the enterprise and the creation can and must work also inside the male and feminine relations.