The Passion of the Christ by Mel Gibson 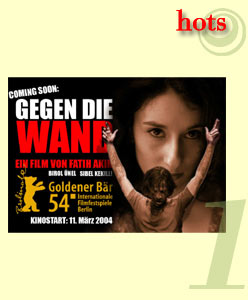 “Head-On” (Gegen die Wand) by Fatih Akin
German cinema made a breakthrough by winning the Golden Bear in the Berlinale, marking the first time in 18 years that a German submission manages to take the top prize. The awarded film “Head-On” (Gegen die Wand), directed by German-Turkish director Fatih Akin, tells the story of a marriage of convenience between two Turks in Hamburg: young Sibel, who is trying to escape the influence of her traditional family, and the older and self-destructive Cahit. The 23-year-old Sibel Kekilli, who in the film plays a nurse, grabbed the media’s attention not because of the her illustrious Berlinale debut but mostly because of her pornographic past. 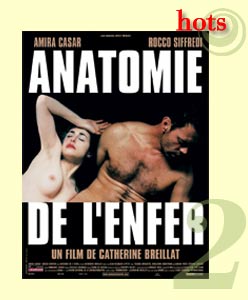 Anatomie de l’enfer by Catherine Breillat
Discovered by Helmut Newton, intriguing and sensual Amira Casar has revealed her talent of real drama actress in the last cult French movie. Catherine Breillat wanted her together with Rocco Siffredi as the protagonist of Anatomie de l’enfer (Anatomy of Hell), «the theorem of Pythagoras of obscenity» as the director herself defined it. The gestures of her porcelain body, always naked and exposed are intentionally inspired to the L’origine du monde, famous painting by Gustave Courbet, portraying feminine intimacy as nobody ever dared before. The whole movie takes place in an alcove, far from the world, in which a nameless woman pays a gay man to look at her sex. 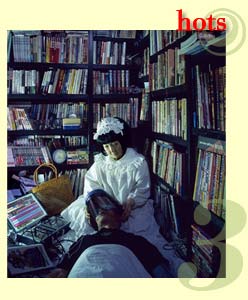 My Grandmothers, Berlin
Old ladies acting like strong girls, exhibited at the Guggenheim of Berlin until March 28th. It is a series of giant pictures by the Japanese artist Miwa Yanagi, entitled My Grandmothers; a fantastic projection of seniority elaborated from girls. The idea turned into reality after the artist’s interview to girls aged between 18 and 34, transferring their personal visions of life in 2050. The result is a series of portraits accompanied by a few poetic lines where the artist focuses on the roles and the image of Japanese women, analysing their dreams on the future. 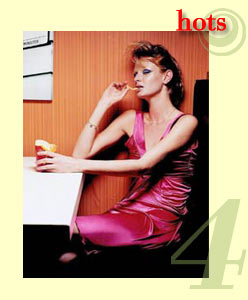 McDonald’s, London
In London a new McDonald’s has opened in Charing Cross, innovative for the usual standards of this fast food chain. The choice of the testimonial for the day of the opening, the Vogue model Olivia Inge, is already a mark of the change of direction towards more care and refinement: the layout of the store is similar to a trendy restaurant, with velvet couches and dark colours, and the menu has been integrated with more sophisticated dishes. Furthermore – as already experimented in other countries such as the US and Israel – also in London it will be possible to use the Wi Fi technology. 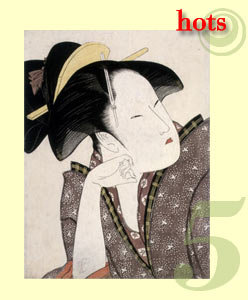 Ukiyoe, Milan
In Milan, the exibihition Ukiyoe portrays the images of the “floating world” (ukiyo-e): the fleeting pleasures of festivity, fashion, the world of entertainment, illecit love and secret passion, all the human attachments to the material world. More than 500 works found in paintings, screens, illustrated books and, above all, the prints, coming from the principal european and worldwide pubblic collections, portray the deep cultural transformation of japanese society between the XVII and the half of XIX century and the developing trends and customs nearby the new capital of Edo, today’s Tokyo. 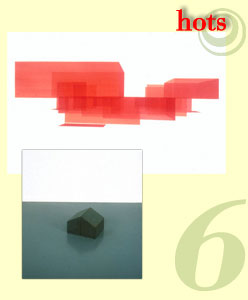 From House to Home: Picturing Domesticity, Los Angeles
Artists explore ideas of domesticity at MOCA, the Museum of Contemporary Art of Los Angeles, in the exhibition “From House to Home: Picturing Domesticity“, that reveals their varied investigations of home–the house structure, its material components, and the complex range of narratives embodied by its physical space. Featuring works from the permanent collection by Diane Arbus, Kevin Appel, Uta Barth, John Divola, Eric Fischl, Jeff Koons, Gordon Matta-Clark, and Joel Shapiro, this selection includes a variety of media and notions of domesticity. The exhibition is organized by Curatorial Assistant Rebecca Morse. 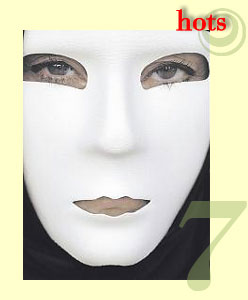 Bruciata Viva (Burned Alive) by Suad
The autobiographic story reveals the terrible socio-cultural reality of Jordanian women: at the age of 15 Suad – guilty for being pregnant – is burned with acid by her own relatives. Despite the burns she survives and with the help of a humanitarian organisation she escapes to France. Her inner strength has allowed her to still believe in a possible future and to build a family of her own. After many years, this book represents a cry against the barbarian oppression women are subject to. 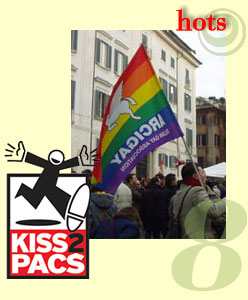 Kiss2pacs, Rome
On Valentine’s Day a mass kiss has sealed the request to the Italian Parliament to approve the draft bill on the Civil Solidarity Pact for cohabiting couples. More than 1.800 couples kissed in Piazza Farnese in Rome during the Kiss2pacs demonstration, organised by Arcigay. This number has made Rome enter the Guinness World Records, since it beats the record of 1.588 couples mass kiss in Canada. 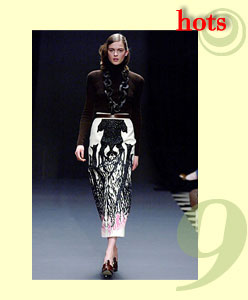 Giles Deacon, London Fashion Week
Deacon, 34, graduated from Central St. Martin’s ten years ago with Hussein Chalayan and has spent the intervening years freelancing, with stints at Bottega Veneta and Gucci. He chose London Fashion Week as a launchpad for his first collection. Deacon’s international experience shows in the polish of his silhouettes–and in the roster of supermodels (Nadja Auermann and Eva Herzigova among them) who wore his precision-cut wide-shouldered jackets, pencil skirts, cashmere tank tops, and fan-pleated skirts. With its underlying thread of perversity (covered-up dresses that showed intriguing flashes of garter and seamed stockings), Deacon’s collection put down a marker for a new English look. 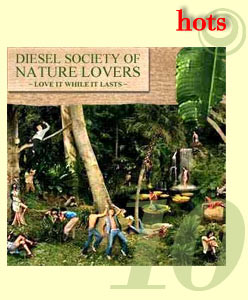 Fashion and Nature
Nature and plants are at the centre of many advertising campaigns of fashion houses for Spring/Summer 2004. Missoni has put his men and women models in front of a real wall of leaves; Gucci’s models flirt and undress close to a swimming pool and among the hedges; also Hugo Boss and a lot of others have chosen a natural location. Diesel, in line with its desecrating and ironical tradition, makes fun of the big brands, putting on stage a false Nature Lovers Society.