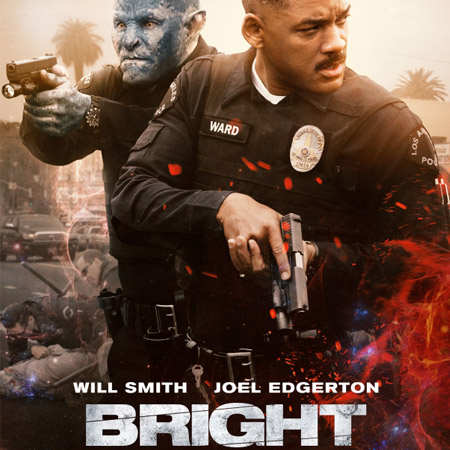 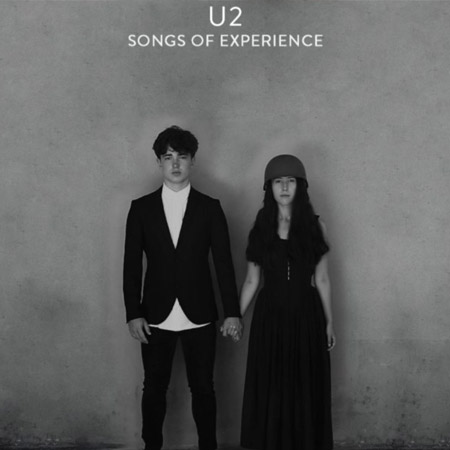 Song Of Experience album – U2 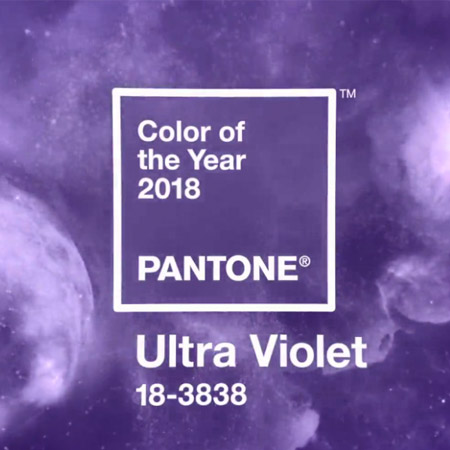 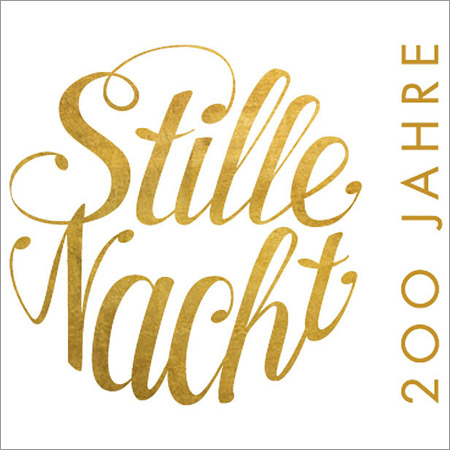 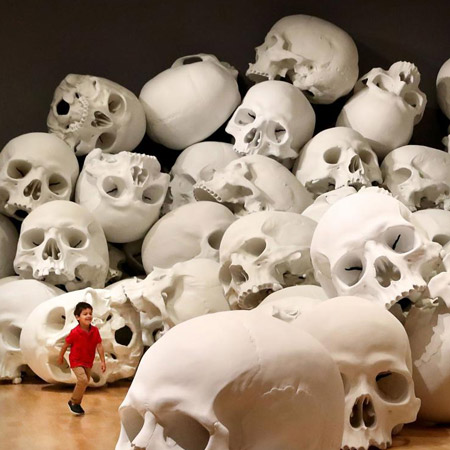 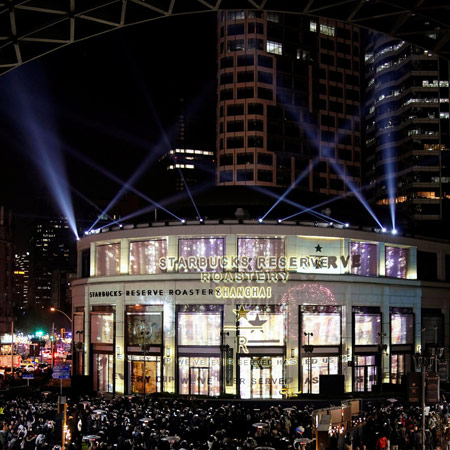 Starbucks Roastery Reserve – Shanghai
“It’s like Alice in Wonderland meets Willy Wonka,” said Emily Chang, senior vice president and chief marketing officer for Starbucks, China. “It’s one thing to imagine a fully integrated in-store and digital experience, which brings together the impressive scale of the Shanghai roastery with the highest quality small-lot coffee beans. It’s quite another to watch the ar experience get built, and come to life.‘” The second China Starbucks opened Wednesday December 6th in Shanghai is the largest store, a 29,000-square-foot sanctuary staffed by 400 employees. Inside the Starbucks Reserve Roastery in the city’s center, customers got a close look at how the brown stuff is made. Pipes carried raw beans to roasters, then to a two-story-tall bronze vessel decorated with hundreds of traditional Chinese seals and patterns. Starbucks is for Chinese Millennials, as a young Chinese said: “Though many older Chinese like tea, I just like coffee… as the old saying goes, once love has begun, it never ends.” 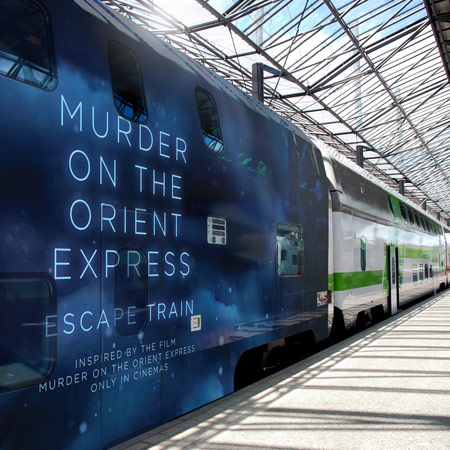 The Escape Train – Finland
To promote the film Murder on the Orient Express, the rail operator VR and Nordisk Film in collaboration have created The Escape Train, an original advertising campaign. A gameplay in which a real train, traveling between Helsinki and Rovaniemi, on the 13th December, hosted a mobile escape room, the largest and longest ever made. During the journey, which lasted 13 hours and 1,000 kilometers, the chosen passengers, recruited in an online promotion and divided into two teams, tried to solve the mystery, exploring different wagons and cabins, interacting with actors, but also with other passengers. Everything has been live-streamed, allowing online viewers to follow the course of events. 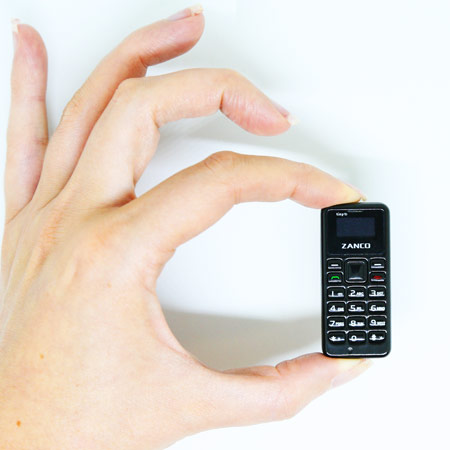 World smallest phone – tiny t1 by Zanco
It’s called tiny t1 and is the smallest phone in the world. It is as big as a walnut and just under a lighter. The Chinese company Zanco produces it and is able to receive and make calls as well as send text messages. It weighs only 13 grams, is 21 mm wide, 46 tall with a thickness of 12 mm. tiny t1 hosts up to 300 numbers in the phone book, can send 50 text messages and keeps the list of the last 50 calls. The battery lasts 3 days on standby and 3 hours of talk time. To produce it, Zanco launched a fund-raising campaign on Kickstarter, reaching 100000 euros in a short time, when it was aiming to raise 28000. Bookable for 39 euros, it will be delivered in May. 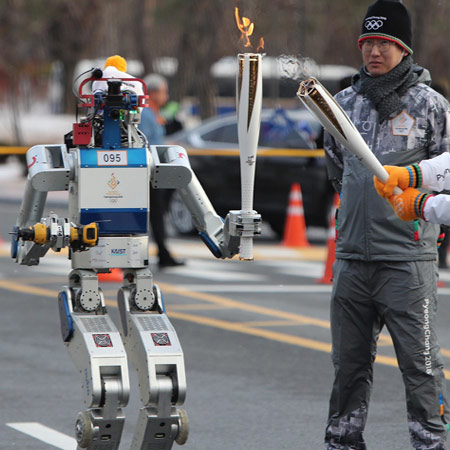 Hubo passes the torch of the PyeongChang Winter Olympics in South Korea
The Olympic torch of the PyeongChang Winter Olympics in South Korea has been making its way across the country. On day 41 of the Olympic Torch Relay, HUBO the humanoid robot had the honor of passing the torch at its birthplace of the Korean Advanced Institute of Science and Technology (KAIST). It walked about 500 feet to a wooden wall (painted to look like bricks), used a drill to cut a hole, then punched through it with the torch to pass it along to its creator, Professor Oh Jun-ho. Standing at 47 inches tall and capable of walking 65 paces per minute, HUBO is one of the 85 robots that the PyeongChang Olympics utilize to assist with security, information services, mural painting and cleaning. 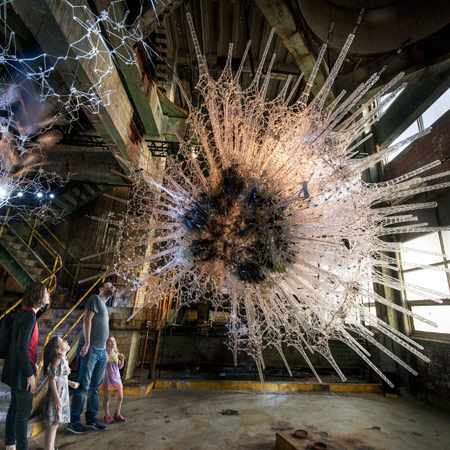 Astrocyte by Philip Beesley – EDIT – Toronto
Astrocyte is the name of one of the newest project proposed by Philip Beesley Architect. The aerial scaffold structure, inspired by astrocyte nerve cells and part of EDIT Toronto’s Expo for Design, Innovation and Technology, was hosted at an abandoned Unilever soap-manufacturing factory. It’s a responsive soundscape, that not only invokes emotional reactions but reacts to participants’ movements and gestures, built from 300,000 components, such as acrylic, electronic sensors, custom glasswork and 3D-printed lights , was created in collaboration with 4D Sound, with additional support from the Social Sciences and Humanities Research Council of Canada and the Ontario Arts Council. 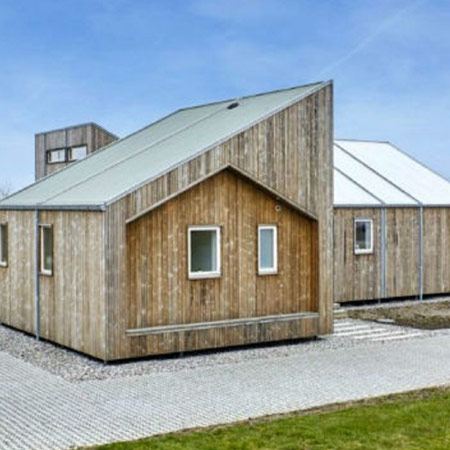 Biological house by Een Til Een – Denmark
Located in Middelfart, Denmark, and built by Een Til Een, the world’s first biological house has opened its doors to the public. Setting a new high standard for eco-friendly buildings, the modular structure is made from upcycled materials. Focusing on architecture, materials, indoor air quality and design, the biological house uses agricultural industry residual products like grass, straw and seaweed and upcycles them into valuable building mediums. The biological house by Een Til Een takes pride in processing materials that would be normally considered waste and burned for energy, and turns them into the bulk of the raw materials needed for construction. This avoids the environmental impact that burning them would cause and gives them a second life. The property can be easily adapted to each customer, and once constructed, the building can be removed and rebuilt anywhere. 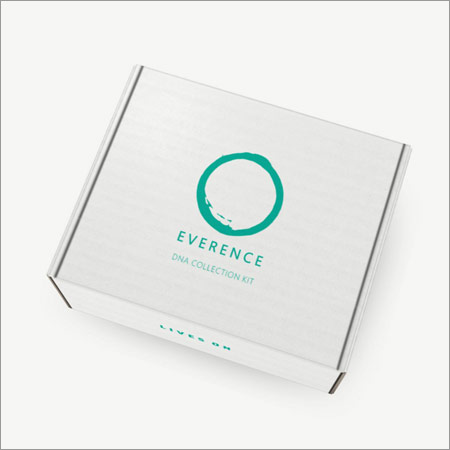 Everence biogenetic tattoo
Tattoo methods are constantly improving, and the ink used is undergoing changes as well. The latest innovation in materials contains an unexpected ingredient: DNA. The ink Everence lets you put a literal piece of someone into a new or existing tattoo. Starting at $540, you can send in a sample of a loved one’s DNA (whether that be from the inside of someone’s mouth, carbonized hair, or cremated ashes, etc.) and have it synthesized into a material that can then be added to any type of tattoo ink. It doesn’t even have to be human DNA, either – if you have a family pet you want to remember, you can send their DNA in, too. It’s reported as safe as regular tattoo ink. Mixed ash and other organic materials into tattoos is nothing new, but those ingredients would eventually be absorbed into the body. But for Everence, DNA material is milled, sterilized and protected by capsules of PMMA, AKA plexiglass. If the idea of using plexiglass in your body freaks you out, just know that it’s often used medically for things like bone cement. And because the DNA is protected by the PMMA capsules, it will stick around and stay a part of you. That way you can literally carry your loved one with you wherever you go. 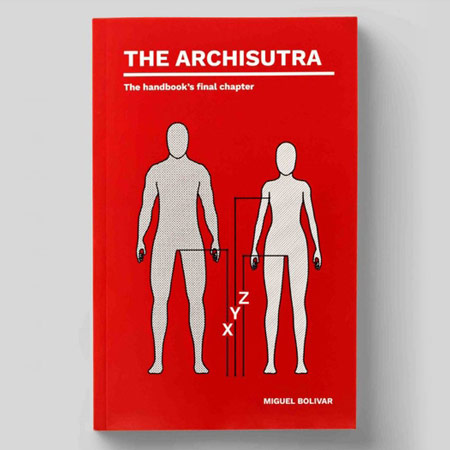 The Archisutra book by Miguel Bolivar
London-based architect Miguel Bolivar released his side project The Archisutra, an architecture and design take on the Kama Sutra. This manual gives you all the data with annotated scale drawings and informative descriptions, including categorizations of “Typical Location” and “Sustainability”. Each position is inspired by an iconic building and often incorporates the use of designer furniture. The architecture-inspired sex positions are humorously-named: for instance, there’s the “Truss me”, the “Eames it in”, and the “Get an Eiffel”. The author sustains “The Archisutra follows on from the work of Vitruvius, da Vinci and Le Corbusier and pushes the idea that buildings should be designed around human life.” 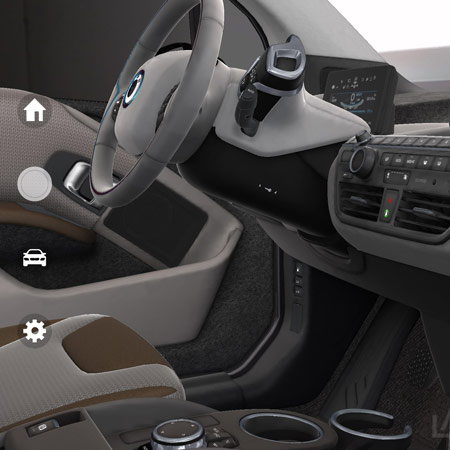 i Visualizer app by BMW
BMW is the first automotive brand in the world to offer customers an interactive, 3-D augmented reality experience of their products. BMW released an iOS version of its mobile app, the i Visualize, that lets iPhone and iPad users inspect cars using augmented reality (AR), the technology that overlays digital images on a real background seen through a mobile camera, acting as a virtual showroom for BMW’s “i” line of vehicles. Using the app one can change the vehicle’s color, interior and wheels. They can even open the doors and climb into their digitally visualized model. Users can even walk around as different angles of the vehicle pop up on their screen. 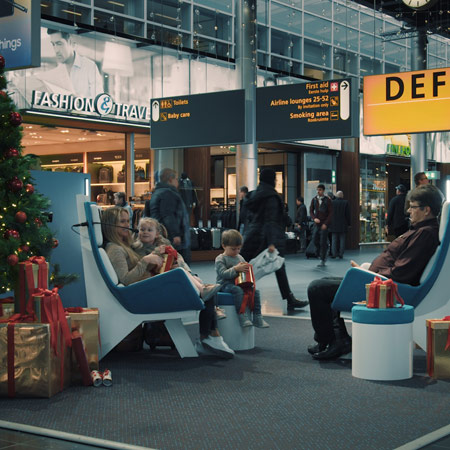 The Connecting Seats by KLM – Schiphol – The Netherlands
Airports are by definition places of transit for people from different places and stories, who often experience at the airport as estranging and impersonal. To provide an entirely new opportunity, during Christmas holidays, KLM Royal Dutch Airlines created The Connecting Seats. A project that has given the opportunity to people from all over the world to exchange greetings and entertain small conversations. The Dutch national airline has, in fact, created transit areas at the Schiphol airport in Amsterdam, equipped with special seats, able to translate in real time dialogues between people of different languages. The special seats were equipped with integrated speakers, directional microphone and hardware connected to the Google Cloud Speech. Through this project, travellers from over 30 different countries have set aside their smartphones for a while, opening up unexpected (but sometimes intense) relationships.