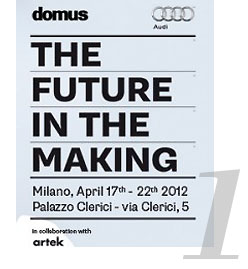 The future in the making exhibition – Domus – Milan
The exhibition, The future in the making, organized by Domus magazine for the Design Week, hosted projects, live performances and workshops with the goal of imagining the future of design. The initiative, housed in the impressive Palazzo Clerici in Milan, on two dfferent levels, has highlighted the work and inventions not only of designers, but also of companies and platforms “engaged hin reshaping the technological, philosophical and economical conditions of design” as the promoters explained. Of particular note is the proposal of thedesigner Markus Kayser, who has designed a CNC machine capable of constructing objects with solar energy and the use of sand as a raw material. 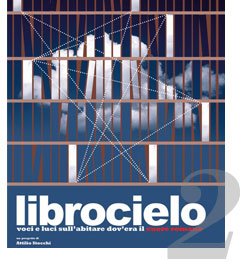 Librocielo (skybook) by Attilio Stocchi – Biblioteca Pinacoteca Accademia Ambrosiana – Milan
Librocielo was the name of the multimedia installation designed by Attilio Stocchi and built by Fondazione Cosmit Eventi, on the occasion of the Milan furniture fair 2012: an event designed by the renowned Venetian architect and housed in the Biblioteca Ambrosiana. Between April 17th and 22nd, open to the public only out of hours between 20.30 and 23.00, the visitor was asked to follow a path where they could see and hear “books talking among themselves” in an exciting scenario of projected lights. With Librocielo, Attilio Stocchi paid homage to the history of the ancient city of Milan, identifying in the historic library a symbolic place that sheds light on the memory and the urban identity. 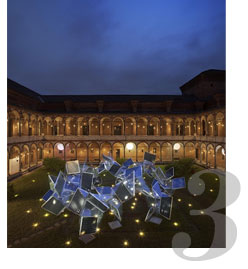 Photosynthesis by Akihisa Hirata for Panasonic – Milan
On the occasion of the Milan furniture fair Panasonic presented an installation created to show the most up to date solutions for the generation, storage, saving and the management of energy. The result, entitled Photosynthesis is the brainchild of Japanese architect Akihisa Hirata, who took inspiration from the natural cycle of photosynthesis to design an ecosystem powered by the sun. A series of solar panels is used to reproduce the energy cycle in all its stages: the generation, storage (in batteries), saving (through the use of LEDs). Everything managed and controlled by a centralized system. «Photosynthesis» – explains Akihista Hirata – «is a miniature ecosystem and can inspire an artificial future in complete harmony with the natural order of the planet, with buildings and cities that become an integral part of the biosphere». 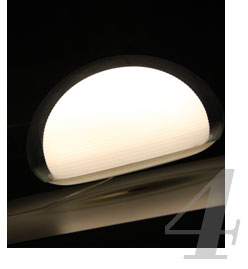 Japan Creative – Glass Lighting – Mihoya Glass in collaboration with Yeongkyu Yoo
Mihoya Glass is renowned for its group of artisans who specialise in designed glass products. Yeongkyu Yoo, a designer with innovative creativity who skilfully uses the latest technology, has brought out the best in the highly skilled artisans of Mihoya Glass. His theme for the project was: “A fusion of the most traditional and the most futuristic.” The simplicity of his design and the artisan’s spirit among the professionals of Mihoya Glass, who are even more inspired when faced with difficult challenges, are combined to produce an innovative design that is marvellously fresh and new to viewers. 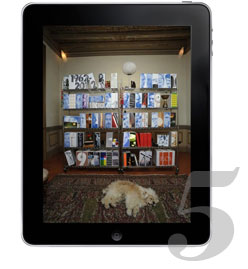 Flos 50 app
In order to celebrate its 50th anniversary, Flos recently launched an iPad application developed by Mobile Dream Studio. The app is not simply a catalogue, but a true journey in the history of design. Piero Gandini, the CEO of Flos, collaborated with writer and journalist Stefano Casciani and Turkish photographer Ramak Fazel to create a real family history focused on “precision, project and poetry”. The app offers a detailed chronological sequence of facts, full of archived images of the people who started the company, as well as sketches, prototypes, games, products and videos of the production processes. 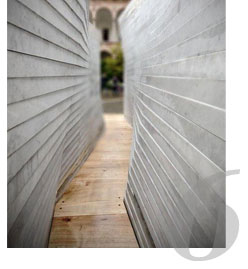 One – Into The Void installation by SOM – Milan
The international studio SOM (Skidmore, Owings and Merrill) has interpreted the relationship between marble and architecture in the installation-sculpture “One – Into the Void”, with the partnership of Marmotec. Two impressive vertical walls made with marble modules 10 cm thick, to form a narrow path almost 5 meters in length. The passage, like a path of initiation, symbolizes the quarrying of marble, the gap left by man in the earth, the arduous path of creativity in relation to material. 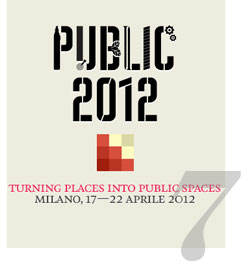 Public Design Festival – Milan
Turning everyone’s spaces in spaces for everyone: Public Design Festival present both a place in Milan where new rhythms and relationships can be experienced within the city – a new business model – and a ‘manifesto’: an innovative model, enforceable and repeteable everywhere, that consider food, nutrition, country and nature as settings for the sharing of knowledge and culture and for socializing. After three editions of the festival which featured in Milan international designers and public design interventions in streets, train flyovers, local markets and urban voids, the 2012 edition works onto a private place to make it public: Cascina Cuccagna, an 18th century rural farmstead restored for public use by a consortium made up of 10 Milan-based association. 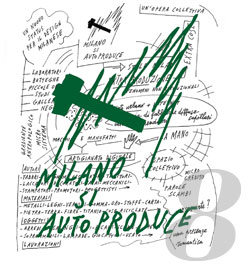 Milano si Autoproduce exhibit by Alessandro Mendini – Milan
From April 17-22 at the “Cathedral” of the Fabbrica del Vapore (ex-steam factory) in Milan, the exhibition “Milano si autoproduce” was held in partnership with MISIAD and the Culture Department of Milan, and was curated by the designer Alessandro Mendini. “We work to allow mini-cultural excellences emerge” is the slogan of the Cultural Association Milanosiautoproducedesign-Misiad, which aims to give space in the market to young designers and artisans in and around Milan by creating a brand that collects these pieces of cultural excellence and promotes participation at international fairs. The Mayor Giuliano Pisapia summarized the project’s purpose: “To facilitate and establish permanent relations between Institutions and Associations that are Milan’s most relevant economic and financial players and to develop a territorial project, which promotes Milan as an international capital for artistic and cultural production through the project’s use of strategic marketing and cultural diplomacy”. 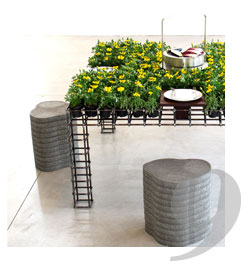 ORTOFABBRICA – Milan
This year Milan’s Fuorisalone saw the return of the environmentally sustainable event ORTOFABBRICA, conceived and produced by Angelo Grassi (designer and founder of Fabbrica), which proposed a way to construct, recycle through re-use and produce eco-friendly furniture. The event was entirely devoted water, renewable energy methods and the revival of a grassroots economy. By transforming a parking lot in the centre of Milan into a green oasis, a creative garden and a warehouse of green ideas, Angelo Grassi succeeded in proposing a modern reassessment of what was considered “normal” during the 20th century, including the concept of daily necessity, the optimization of energy, and economic and natural resources. In the open-air space in via Savona 37, renewable energy forms were presented in the ORTOSERRA, a sort of eco-greenhouse conceived by AngeloGrassi Design. This self-supporting unique system consisted of a recycled iron framework, walls made of terracotta “ortovases”, photovoltaic panels and in the middle of the courtyard a Bio Swimming Pool was installed. 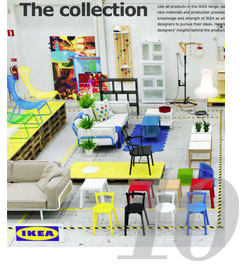 PS 2012 collection by Ikea – Milan
Within the spaces of via Ventura 15, Ikea presented the PS 2012 collection, for which the Swedish brand asked 19 designers to reinterpret products from the brands long history while looking to the future. The designers had access to more than 60 years of images, catalogs and also consulted the Ikea archives for inspiration and to help them create 46 new products: useful, sustainable, flexible, funny and surprising products, in different materials and colours. Once the inspiration was found, the designers committed themselves to interpret and improve the form,the function and above all the aspect of sustainability.