The Interpreter by Sydney Pollack

Promisedesign, Milan
The Triennale di Milano presents promisedesign, a collective exhibition of Israeli design. The exhibition makes its debut in Milan on the occasion of the Salone del Mobile. promisedesign wants to provide an insight into Israeli design by searching for answers to the questions of a local identity in Israeli design and its characteristics. Promisedesign is an experimental approach to design that explores materials as well as contemporary life styles in continuous evolution. Promisedesign focuses on the following topics: Shulhan Aruh (The Set Table) illustrates the realm of ceramic cutlery. Golem presents interactive objects -or those that simulate human behavior. Wunderkind adresses design for children. The last two themes are Post industrial crafts, and Furniture and light. Promisedesign will not only try to disclose or at least partially reveal “the world’s best-kept secret ” but also to shed light on what until now has been a “promise”: to be kept by Israel’s designers,as well as its industryand institutions. 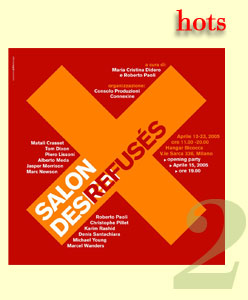 Salon des Refuses, Milan
From April 13th through 23th, 2005 Consolo produzioni&consulenza and Connexine present a project by Maria Cristina Didero and Roberto Paoli: the Salon des Refuses, at Hangar Bicocca in Milan. Salon des Refuses gives free rein to the greatest avant-garde designers of today. The exhibition includes drawings, projects and vision of the most creative minds of contemporary design: objects and projects rejected by forniture manufacturers that have not yet reached either mass production of the general public. From Denis Santachiara’s two heads squeezer to the futuristic Marc Newson’s cars, from Jasper Morrison’s plastic bicycle to the Reticular Home by Matali Crasset. Even the greatest designers have some projects rejected: keeping its distances from marketing and production strategies, the Salon des Refuses is a landscape in constant development, a time machine that takes you into the future. 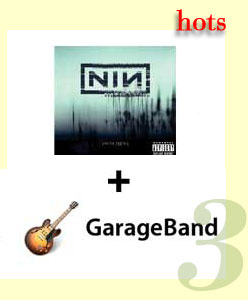 Nine Inch Nails and GarageBand
For the launch of their latest album With Teeth, the American rock band Nine Inch Nails released a single as a GarageBand file. GarageBand is an Apple application which allows any user to make personal remixes and records. Trent Reznor, the frontman, said: “‘What I’m giving you in this file is the actual multi-track audio session for The hand that feeds in GarageBand format. This is the entire thing bounced over from the actual Pro Tools session we recorded it into. I imported and converted the tracks into AppleLoop format so the size would be reasonable and the tempo flexible.’” The file is available for free download, from their site. 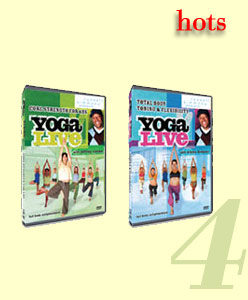 Russell Simmons Presents: Yoga Live
Russel Simmons is a yoga practitioner, entrepreneur, philanthropist, and political player. He’s most famous as the co-founder of Def Jam Records, the label that launched Run-DMC, Public Enemy, and the Beastie Boys, and along the way propelled hip hop out of the ghetto and into the Mall of America. Simmons is now releasing a hip-hop yoga video series, Russell Simmons Presents Yoga Live. The series will include four videos of original music and yoga instruction and to top it all off proceeds from the series will benefit the Rush Philanthropic Arts Foundation. 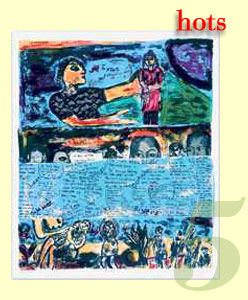 Through the Looking Glass, Johannesburg
The title of the exhibition that takes place in Standard Bank Gallery in Johannesburg, alludes to the adventures of Alice in the celebrated writings of Lewis Carroll. Through the looking glass examines representations of self by South African women artists and explores the many intriguing ways in which works in different media speak of women’s relation to their communities. Brenda Schmahmann, curator of the exhibition, notes in the book dedicated to the show that South African women artists “have produced self-representations not by gazing at the looking glass but by moving and working through ideas that have underpinned prior uses of the mirror as motif as well as self-portraiture as a genre”. 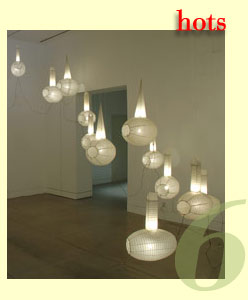 Carlos Garaicoa – MOCA Pacific Design Center, Los Angeles
The Museum of Contemporary Art of Los Angeles presents – at the Pacific Design Center – a new exhibit by Cuban artist Carlos Garaicoa. In his work Garaicoa uses architectural models, renderings, drawings, videos, and photographs to articulate the failed outcome of social and architectural programs in Cuba. Adopting the city of Havana as his laboratory, Garaicoa has been working since the early 1990s using a multidisciplinary approach that includes architecture and urbanism, narrative, history, and politics. It has also increasingly developed an international character, blending sociological ideas, archeology, and architecture, and transforming cities and urban spaces into a sophisticated commentary on the differences between symbol and reality. Los Angeles show features 13 new works, including this installation of 76 rice-paper lamps (pictured), clustered together to project an image of a floating, futuristic-looking city.

Fiat Campaign “Metteteci alla prova” (Try us), Italy
Do we buy foreign cars? And so we hear the ‘merci’ from the French, the ‘danke’ from the Germans or the ‘arigatò’ from Japanese. The provocative Fiat adv campaign (online in the commercials section of Film Master) provoked a lively debate, on the net and in the media, for having focused on the sense of guilt of the Italians, when buying a car. Fiat challenges a direct comparison with its competitors. The target is to modify a behaviour, focusing on the italian genius loci. Simone Migliarino, Fiat Communication representative, says: “this adv campaign has a simple and clear message: we believe in what we do, so try us”. 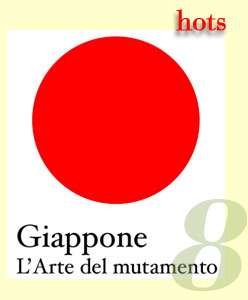 Japan, exhibitions at Palazzo Ducale, Genoa
The city of Genoa maintains an active role of international level proposing city, with some series of cultural events dedicated to Japan. The project is characterized by three exhibitions installed in Ducale Palace in which the Japanese culture is faced under several points of views. Japanese culture is linked both to the past, with the exhibitions on the Press and the paintings Ukiyoe 1660-1860, on Woven and customs between the 1700′s and the 1900′s from the Montgomery collection, on Hiroshima-Nakasaki: Photography of the memory and to the present through tyhe exhibition The Manifest of Artist 1955-2005. 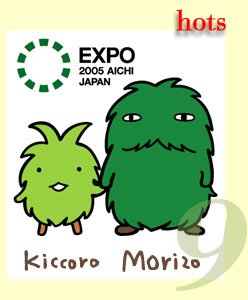 Expo 2005 Aichi, Japan
Visitors at the 2005 World Exposition in central Japan’s Aichi Prefecture, are being offered a comprehensive concept of “harmony between human and nature”. At the two expo sites in the town of Nagakute and city of Seto,visitors are able to get a glimpse of the pavilions of 120 overseas countries, four international organizations as well as those of central and local governments and companies such as Toyota Motor Corp. and Hitachi Ltd. With the theme of “Nature’s Wisdom”, the fair’s main attractions are a frozen mammoth unearthed in Siberia, state-of-the-art technology such as humanoid robots, and futuristic transportation systems including a magnetically levitated train and hybrid fuel-cell buses. In keeping with the expo’s theme of environmental consciousness, there were “velo taxis”, or pedal cabs, in operation, a power generation system that utilizes waste to make electricity, and trash cans for separating garbage into different categories. Cutting-edge robotics were also on display. Mitsubishi Heavy Industries Ltd.’s robot wakamaru served as a receptionist at one of the sites, offering floor information and connecting calls to expo association officials. 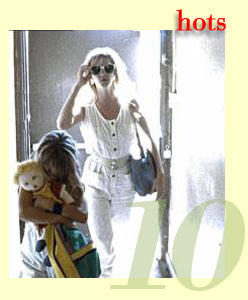 3′ – Centro Galego de Arte Contemporánea, Santiago di Compostela
The “Centro Galego de Arte Contemporánea” in Santiago de Compostela, in Galicia, is now proposing an exibihition of ten works of international film and video artists, who were limited to a film duration of three-minute each, to tell a “condensed story”. These films present new perspectives on the concentration of content and models of perception through montage, fragmentation, poetic intensification and the emotionalisation of the viewer. The screening of ten three-minute films in loop has became an exhibition condensed in thirty minutes. The spots, mini-films, videos and abstract works of authors such as Doug Aitken, Anri Sala and Yang Fudong, represent the development of the visual arts towards the short film genre as the most suited to reflect the loss of attention and ability to concentrate of today’s society.